What’s Jen Psaki Trying to Say About Me?

RUSH: Now, I was given this sound bite. I’m not crazy about playing this sound bite, but I’ve got people telling me on the staff you need to play it and explain it. It happened last night. Grab sound bite number four. Last night on CNN’s Anderson Cooper 97, the guests Jeffrey Lord, the American Spectator, our old buddy, and Jen Psaki, the former White House communications director. She was instrumental in running the failed and embarrassed Hillary campaign. And they were having a discussion about the FBI obtaining a FISA warrant to surveil Carter Page. And Jeffrey Lord mentions me in his comments, and it’s Psaki’s reaction that people tell me I need to address. 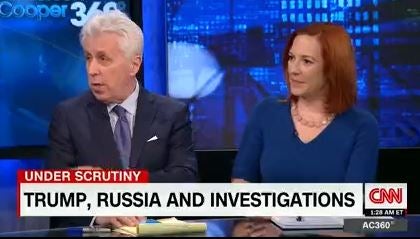 LORD: Rush Limbaugh spent a considerable period of time on this today, and I use Rush as indicative of the conservative media, saying that this whole FISA warrant story, in essence, proves that there was no collusion and that the big problem here is — I can see my friend Jen rolling her eyes — is the Obama administration and the leaks, et cetera, et cetera. So this is not gonna go away, at least for that reason.

PSAKI: Well, I’m not sure Rush Limbaugh is the arbiter of mainstream news, just to start, but the second piece of news that broke on a CNN report yesterday —

RUSH: Okay, that’s it. “I’m not sure that Rush Limbaugh’s the arbiter of mainstream news.” What does that mean? I know what “arbiter” is, but I don’t know what she’s saying. Is she saying that I’m not qualified to analyze mainstream news, or is she saying that my analysis is irrelevant because I am not the arbiter? I mean, people said, “You should have heard what they said about you on CNN last night.” I heard it, and I said, “What’s the big deal?” She’s a Hillaryite.

He’d never met Trump. He was not on the Trump campaign staff. He’s a volunteer. He had worked in Russia 10 years prior and had invested in a Russian energy conglomerate called Gazprom. And so they surveilled this guy, and I’ll tell you why. Once they got the FISA warrant, which everybody’s been denying all of these weeks now, once they got the FISA warrant, then that allowed them to spy on the whole campaign, not just him.

Because if you’re gonna surveil Carter Page under the pretext here that he’s a participant in the collusion, well, now you’ve got a wide open door to use the surveillance you have permission to do on him to examine the whole campaign. That’s what this was all about, and that’s what I was saying.

Folks, if you want to get it down to base level, what she’s really saying is that I’m not mainstream, that I’m kook, and therefore not qualified. It’s insider-outsider. I’m not establishment, therefore I don’t rate, I don’t count in her world. That’s what that means. Pure and simple. It’s a badge of honor for me, don’t misunderstand.

Let me take a break here. We’ll come back. I’m gonna get back to phone calls. I’ve got the Trump sound bites on Russia and how we are perhaps at an all-time low in our relationship with Russia. This is classic. Now, the commentariat, “Oh, my God. Oh, my God. Oh, no, is it that bad? Oh, my God, and Trump’s, oh, oh, oh, oh, no.” They’re clueless as to what Trump is doing, why he would say this. The fact is it’s probably much better than it has been in a long time except Trump just doesn’t want them to know that yet.