RUSH: As you know the New England Patriots are visiting the White House today to be honored for their Super Bowl victory. And, in addition to the six Patriots that said they weren’t gonna show up ’cause they’re protesting, a seventh player announced that he was not attending today. And that’d be quarterback Tom Brady, number 12, said that he had pressing family issues and could not make the trip, presumably his mother who is ill.

I have a different theory, but once again I’m too famous to actually share it with you. Well, it is kind of limiting ’cause I get myself in trouble when I tell you what’s really going on, ’cause I can’t keep it between you and me. Everybody hears it, including the people I’m talking about, and then they get mad at me, deny it, when I know it’s not — but he’s not there. But Rob Gronkowski was, number 87, the star tight end for the Patriots. And during Sean Spicer’s press briefing there was an interruption.

SPICER: Can I just — (interruption)

GRONKOWSKI: You need some help? (laughter)

SPICER: Uh, I think I got this, but thank you.

GRONKOWSKI: Are you sure?

GRONKOWSKI: We’re all back here.

SPICER: All right, thanks, man, I’ll see you in a minute. (laughter) Hold on one second. (laughter) All right. That was cool. Real quick, how do you follow that? 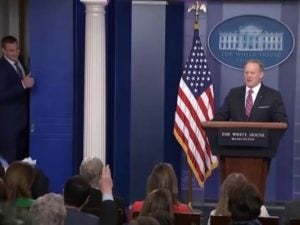 RUSH: Everybody knows that Spicer is embattled as the press secretary. Gronkowski, the pressroom is in the West Wing, it’s not far from the Oval Office, the Cabinet Room. And so Gronkowski pokes his head out the doorway and said to Spicer, “Hey, you need some help?”

“You sure? ‘Cause we’re all back here if you need us.” Everybody started laughing and so forth. What’s good about this is that here’s Gronkowski, everybody loves him, star tight end, and he actually appeared to like Spicer and loves Trump, media hates that. That’s not good. It will tick ’em off the rest of the day now.

RUSH: Well, the New England Patriots just wrapped their outside appearance at the White House. They’ve been there five times, as you know, and Bill Belichick, the head coach, actually said of all the five times, this may be the sweetest. And that just irritates the media, because they think it’s ’cause Trump’s there and then the Patriots owner, Robert Kraft, with a similar statement. He’s a friend of Trump’s. And the media doesn’t like that. 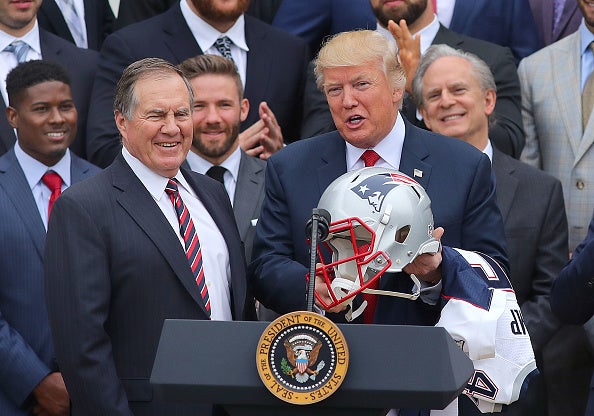 Today he was happy. He made presentations of a jersey to Trump and a helmet to Trump, and media was just — don’t doubt me on this — seething. They were hoping one player, just one player would stand up and make some kind of protest out of this.

I’ll tell you, I’ll make you a prediction? I will predict to you that somebody in the media is going to observe the Patriots’ facial expressions, some of the players’ facial expressions and will write stories on how the team was under oppressed pressure to show up. You could tell by looking that many were not happy, many were exhibiting signs of boredom and sheer disgust with where they had to be. It was clear to us analysts in the media looking at the Patriots standing behind Coach Belichick and Trump that many wished they could be anywhere but where they were.

You watch. We’re gonna see stuff like this. It won’t be long. And Brady not showing up, he has a long statement, family matters, family issues, but he’s very happy to be a member of the team, great championship, already focused on winning the next one and so forth. I’m not surprised. That’s all I’ll say. I just can’t go further, folks. In some ways I’m shackled here in ways that I’m starting to resent, but it’s just the way it is.