Leftists Still Don’t Get This Show or Donald Trump

RUSH: Just a couple of sound bites here starting with public radio in New York this morning, WNYC, The Brian Lehrer Show. Brian spoke with MSNBC’s All In with host Chris Hayes, about reports of sexual harassment accusations against Bill O’Reilly of Fox News. Lehrer said (impression), “Do you actually compete for audience with O’Reilly in that eight o’clock hour or are we living in ideological bubbles in America now to the point that there are people who even might be watching you are not the same Americans Bill O’Reilly had hope to get, and vice-versa?” Did you understand my erudite and brilliant question? And if so, could you enlighten us with your thought, briefly? 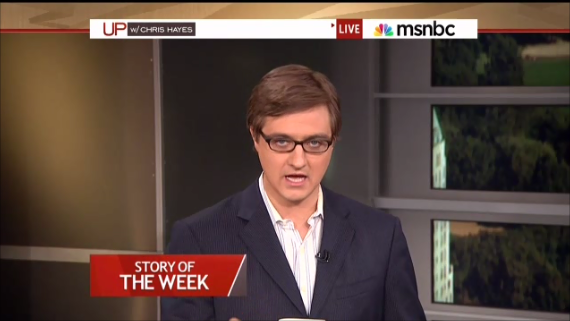 HAYES: The center to center-left of the country consumed a whole bunch of different kinds of media. The other half of the country — the sort of center to conservatives — basically only consume several different outlets. So they just watch Fox or they just listen to Limbaugh and talk radio. The only newspaper whose median consumer is slightly to the right of center is the Wall Street Journal. So you’ve got the situation in which half the population’s audience is being divvied up amongst dozens of different entities, and half the population basically has three or four entities that have a monopoly on them, and it’s actually profoundly dangerous in lots of different ways! Both for, I think, the conservatives on the right (snickering); also for American democracy.

RUSH: Yeah. See how dangerous it is? It’s “profoundly dangerous” that you people in this audience are only listening to me, and maybe a couple or three outlets, and that’s it. That’s profoundly — the rest of America totally enlightened and listens to a wide array of diverse media broadcasts and print operations. But you conservatives are causing a profound danger in lots of different ways — which is, of course, threatening democracy. This is, of course, right off of the Ted Koppel take, which is that you people don’t listen here for facts.

You don’t listen to be informed. You listen here because you’re nothing but ideologues! You’re nothing but conservatives and that’s all you want to hear is conservatism, and if you don’t hear it you go somewhere else where you can, and that’s all you care about. But their audience is made up of the widest array of intelligent people who are genuinely interested in facts. And this guy’s got it exactly backwards. I would submit that people who listen to this program get both sides of every issue.

That’s how I explain the preference of conservatism! That’s how I explain the dominance and the correctness of conservatism, by explaining to people what the liberal position is, and I do it honestly. They don’t even do that. And they never talk about… There’s a survey that I just saw. Who did the survey? I can’t… It was Ad Age. Ad Age is a big trade magazine, advertising, business. They went out there and this surveyed groups of people and asked them, “How often do you see yourself reflected in commercials and prime time TV shows?” Conservative women were number one saying, “We never see ourselves reflected.”

Homosexuals, lesbians, transgenders, liberal women, liberal men, they’re all over the place! They see themselves everywhere and all the time. Conservative women never see themselves reflected. And that is exactly right. Conservatism is not explained on MSNBC where Chris Hayes works. Conservatism’s not even treated with respect or even acknowledged as existing, other than an infirmity and an inanity. This guy’s got it exactly backwards and there’s a reason why they have no audience. There’s the ideologues. They’re the tunnel vision’d ones.

They’re the ones with no wide array of subject matter. They are the ones who toe the line on a very narrow list of items that are almost all related not to even building up liberalism but to destroying whoever their enemies of the day are. That’s all they do. That’s all they are. And there are not facts. They claim the facts, and they claim that they have a common set of facts that everybody would use those facts, the country’d be much better. They’re all propaganda. Modern American media is nothing more than propaganda.

It’s the daily advancement of a liberal jeopardy. That’s all it is. But you see? “They just listen to Rush Limbaugh, and it’s dangerous for democracy — very, very bad.” And then there’s this. Last night CNN’s Newsroom, the cohost was Isha Sesay, and she’s speaking with Dylan Byers, CNN’s “senior reporter for media and politics” about Trump’s decision not to label the ChiComs currency manipulators. You know, you once did; then this thing with the Norks come up.

And Trump dropped conservatism of the ChiComs as currency manipulators. So the host here plays a clip of Trump telling Fox News that he hasn’t softened his stance on China, that they’re just helping us deal with the Norks right now. The CNN hostette says, “Dylan, what do you make of this? Trump is saying I need China for North Korea so now not gonna turn around and call ’em currency manipulators. Didn’t he know when he was on the campaign trail that you can’t do this kind of flip-flopping?” 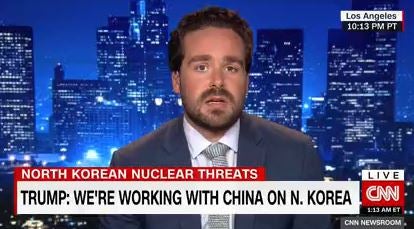 BYERS: This is actually a very interesting test of Trump’s supporters and how far they’re willing to go with him. There are a lot of people out there including influential people in conservative media — Rush Limbaugh, folks like that — who are willing to accept the president’s explanation here. “Well, I can’t go after China for currency manipulation because I need them for North Korea. I always said I was gonna bomb the expletive out of ISIS; so that’s why I went into Syria even though many of you were not voting for an interventionist president.” These — call them excuses, if you will, or arguments. They actually resonate with some members of Trump’s base. There are other members of Trump’s base who aren’t having it. They feel like they’ve gotten the bad end of the deal, and so there’s an interesting war playing out there.

RUSH: Yeah. By the way, as it relates to me personally, I happen to know that are there are many people in the so-called conservative media who do accuse me of this very thing: Being a Trump apologist, somebody willing to accept whatever Trump says. And this also is done by way of knee-jerk reaction, and it’s also coming from a deep state being uninformed. Trump never said he wasn’t gonna get Syria. Trump talked about bombing the excrement out of ISIS all day long! He talked about taking them out. Nothing Trump is doing is a big surprise.

Some Trump people don’t like the idea that he bombed Syria, went after Syria and all that. But I think what they miss about Trump is… Well, I know they do. They think he’s so stupid and so inexperienced that they do not even consider that Trump’s public statements that may be at variance with each other from day to day, could well be strategic. Do you remember…? You may not. I’m gonna remind you. In one of the debates, one of the presidential debates Trump went on a riff of really ripping Obama and Hillary for telegraphing in advance what they were gonna hit ISIS one day, when they were gonna hit this enemy.

He said, “Why in the world would you do it? It makes no sense. It’s stupid. This is the kind of stupid leadership we’ve got. If you’re gonna have a major military assault, you don’t tell ’em when! You don’t promise ’em when you’re coming so they get ready on for it. You surprise them with it.” Martha Raddatz blew her mind. Martha Raddatz was exasperated because first Trump was attacking Obama; that’s a no-no. She said (paraphrased), “Don’t you understand psyops? Don’t you understand psychological operations? Don’t you understand Obama could have been lying about attacking? You’re just so small-minded, you don’t understand.”

Trump’s engaging in that very thing, and there’s no way they can even consider it. It doesn’t even strike them.