RUSH: Hi, friends. This is great. I have been laughing all morning long. I have been laughing starting with last night. Can we agree that Donald Trump is probably enjoying this more than anybody wants to admit or that anybody knows? So he fires Comey yesterday. Who’s he meeting with today? (laughing) He’s meeting with the Soviet, the Russian foreign minister, Sergey Lavrov! I mean, what an epic troll this is. The Democrat Party is going bananas — completely, totally unhinged — on the road to literal insanity.

Do you realize…? Let me tell you what’s happened here. The Democrat Party has once again thrown Hillary Clinton overboard. Hillary Clinton is the most cheated-on woman in America by people in her own party, and it’s happened again. If you’re wondering what I’m talking about, stand by; I’m gonna explain all of this. But they have just chosen sides and, once again, Hillary gets thrown under the bus. And not only that, the Democrats are rolling that bus backwards and forwards. She’s finished! She’s over with.

The Democrat Party and the media have made it clear that she is fodder. She is irrelevant here. (laughing) It is amazing. Two days ago, they were all talking about how Comey needs to be fired because of how he was mistreating Hillary, and the Hillary people were running around claiming that Comey’s a bad guy. And now Comey gets fired, and all of a sudden they do a 180!

Another thing that happened: “WikiLeaks Offers Comey a New Job.” (laughing) Is this not great? “A surprising job offer rolled in for former FBI Director James Comey on Tuesday afternoon, mere hours after President Donald Trump fired him…

“WikiLeaks founder Julian Assange said he would be happy to consider Comey for a position at the organization’s Washington D.C. office, where the now unemployed bureau chief might continue his mission to ‘properly investigate the U.S. government.'” That is not what he’s doing. You know what another big moment in this whole episode is that nobody’s talking about? I wouldn’t go so far as to say it’s the real story, but again this is in the top five.

In Trump’s letter to Comey, Trump mentions that Comey told him three times he was not under investigation. Now, the way this is being handled by the Drive-Bys is, “Well, man, Trump really blew it on this. Trump really messed up! He shouldn’t have put that. He just can’t help himself. He had to let everybody know that he’s innocent He had to know, and he put Comey on the spot.” They’re missing the entire point. You have to know Donald Trump. Yeah, it may look awkward; yeah, it may look unusual.

Comey has told Trump three times he’s not under investigation? Why hasn’t Comey announced that? Comey’s announced everything else about this case. Comey’s violated every rule there is in conducting investigations, especially investigations that are not gonna end up with anybody being charged. That July 5th press conference… We’ve mentioned this I don’t know how many times. That July 5th press conference was totally uncalled for, and it ended up… You can prove that by looking at the various ideological interests in the country.

The left loved certain aspects of it and hated certain aspects of it, and people on the right loved certain aspects. But nobody should have loved it because it was a total bastardization of the criminal justice procedures. What he did just isn’t done. But that’s for later. Three times, James Comey… You think Trump’s lying about this? You think Trump would put this in this resignation letter if this isn’t true? You know what’s gonna happen now? The Drive-Bys are gonna try to get hold of Comey. He was supposed to address a Senate committee tomorrow. 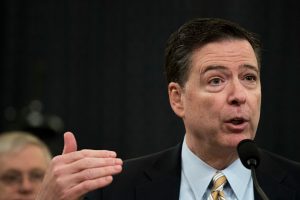 That’s been canceled. He’s still gonna appear before them, I’m confident, but they’re gonna try to get hold of Comey and ask, “Is this true? Is this true? Did you tell Trump three times that he’s not under investigation?” Now Comey’s gonna be on the spot. What if Comey says, “No, he’s making it up”? Can you imagine the firestorm there? What if Comey says, “Yeah, yeah. I told him three times.” “You mean there’s nothing…?” There isn’t anything there! But you know something else amazing about this? These people really believe it, folks.

This has gone beyond mere political posturing. These people on the left — led by the media and the Democrat Party and the political apparatus — I’m telling you, are sick. I have never seen… I wasn’t thinking about it last night. I’m 66 years old. I have been following politics honestly since I was 10. I’m not kidding. I have seen unhinged behavior. I have seen the wild allegations that Democrats make and repeated. I have never seen this degree of collective insanity. I have never seen this degree of so many people literally being out of touch, devoid reality, and unhinged.

I’ve never seen this degree of hate. I understand it because of what’s happened. Trump has totally embarrassed every one of these people inside the Washington Beltway, and he’s taunting them, meeting with the Soviet (chuckling) Russian ambassador today, after the Democrats are convinced the Russians stole the election! They have repeated it so many times; they actually believe it now. The only way this rage can exist is if they really believe this election was stolen, and if the really believe the Russians colluded with Trump.

They really believe Trump fired Comey because he might have been getting close, under the assinine belief that firing Comey’s gonna stop the investigation? How many investigations are there? The House has one. The Senate has one. The FBI’s got their own. Do you know who’s running the FBI today? McCabe, a Democrat! His wife ran for the Senate or ran for governor of Virginia. He’s very close to The Punk, Terry McAuliffe. The guy is a hardened Democrat. He’s now running the FBI. He’s in charge of the investigation to get Trump.

Nothing comes to a screeching halt here just because Comey’s been let go. But the hysteria and the panic and the outrage is rooted in raw hate. The Democrats, wherever you find ’em — in the media, think tanks, don’t care where you find ’em — they’re being consumed by it, folks. They’re literally being eaten alive with an irrational, raw hatred literally absorbing them. Nothing good for them can come of this kind of hate and resulting derangement. Nothing good. This is not how you put together winning movements.

This is not how you build or grow anything, this kind of raw, unfettered hate that they now have lost total control over — and Trump is just taunting them. Trump is just feeding it. He’s doing everything he can to drive them even crazier, and they’re falling for it each and every occasion. Now, nobody’s focusing on the detail that Comey has told Trump three times there’s nothing there. Three times Comey has told Trump, “I’m not investigating you.” They’re looking past that. They’re not even seeing that. 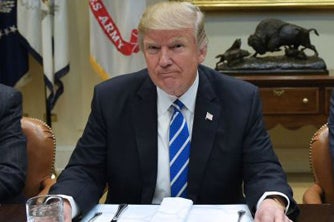 Will the students being traumatized to the point that they cannot take their final exam? Should all tests be canceled? Should school be canceled for the year and everybody just finish on spring break? Is that the only way the left is gonna be able to deal with this? How many millions of Americans are gonna die now because Trump fired Comey? Posttraumatic Comey Firing Syndrome. Will it be covered by insurance companies as a preexisting condition going forward?

They’re not pursuing Trump, according to Comey.

He been cleared three times.

Nobody’s talking about this. Look, there’s all the other detail to go in here. Rod Rosenstein, who actually wrote the memo to Sessions detailing the reasons why Comey should be fired. They’re all right on the money; they’re all spot on. I’m tell you, folks, Trump is making fools of these people. He’s doing what he said he was gonna do — draining the swamp, clearing it out — and they just cannot deal with this. I’m telling you, I have had more fun waiting for this program to begin today. Wait ’til you hear… I mean, folks, they have dumped on Hillary Clinton yet again, and nobody has figured this out yet. I will explain.

Andrea Mitchell, NBC News, Washington, ran into the Soviet foreign minister today. He’s in town talking to Trump. (laughing) Here’s Trump colluding with the Russians and the day after he fires Comey he has a meeting with the Soviet — the Russian foreign minister, Sergey Lavrov! (laughing) I mean, this is trolling extraordinaire. Andrea Mitchell, she is loaded for bear.

After Secretary of State Tillerson welcomed Lavrov to the U.S. — they’re about to leave — Andrea Mitchell found Lavrov and asked him a question.

MITCHELL: (shouting) Does the Comey firing cast a shadow of your talks, gentlemen?

LAVROV: Was he fired?

MITCHELL: (screams) What about the Russian investigation?

RUSH: Did you hear that? Andrea Mitchell, NBC News: “Does the Comey firing cast a shadow around your talks, gentlemen?” And the Soviet, the Russian foreign minister said, “Was he fired?” Mitchell said, “Yes!” Lavrov: “You’re kidding! You’re kidding!” He was fired?” Mitchell said, “What about the Russian investigation?” What investigation? (chuckling) The trolling here, you just have to love it.