Jealous Obama Goes Back to Berlin to Protect His Legacy

RUSH: Now, Barack Obama. He is upset. Barack Hussein Obama — do not doubt me on this — this trip of Trump’s starting in Saudi — and I know it’s not pronounced Saudi. Some people do, though. The Saudis, Saudi, but if you go over there you’ll hear some people say Saudi Arabia. The Palestinians, have you heard how they pronounce “Israeli”? The Israelis. The Israelis. They say it routinely. Even Arafat said it that way. We Americanize “the Israelis.” There are people that say, the Saudis. Even though it’s not the House of Saud, it’s the House of Saud.

Anyway, this trip Trump has been widely praised for his presidential stature, for his speeches, for the successes that he has had. Some people look at them as successes. Some people don’t. I mean, the deal with the Saudis, you can look at that one of two ways. There are people who think that Trump has sold out his supporters on Islam and Saudi Arabia by making this deal. Others are praising it. And I’m telling you, the praise has been noteworthy.

I mentioned it here on Monday, the stark contrast in the two Trumps, the Trump of this trip versus the Trump when he’s in Washington. It’s two different people. But really is it. What’s been different? With Trump over there on this trip, the Drive-Bys have not even been covering it. They’re still covering the Russian angle and the collusion and all that. There have not been, have you noticed, any White House press briefings while Trump is away.

And the absence of briefings from the White House pressroom, has eliminated a central source of comedic material for late-night shows every night. It has eliminated numerous sources for the media to report and exaggerate and lie about what’s going on with the Trump administration, because you don’t have conflicts. You have Trump saying one thing overseas and that’s it. You don’t have a press briefing two hours later where he’s contradicted by people in his own communications office, which requires clarification.

So you haven’t had while he’s been gone the appearance of a White House that doesn’t know what it’s doing. You’ve had the appearance of an administration that’s buttoned down, very sure of itself, it’s got its agenda, and it’s proceeding with it. My contention is that this bothers Barack Obama greatly. I think that Obama cannot stand that Trump is even being shown respect.

I’ll tell you something, folks. Do not doubt me on this. When Obama first visited the Saudis remember he bowed and did all that? And the Saudis, they were respectful, but they didn’t hail Obama or his visit. The Saudis went nuts over Trump. The king of Saudi Arabia was saying for the first time we may actually be able to move forward and make progress on things we have in common, fighting terrorism, whatever. Forget whether or not the Saudis meant it. That’s not the point. 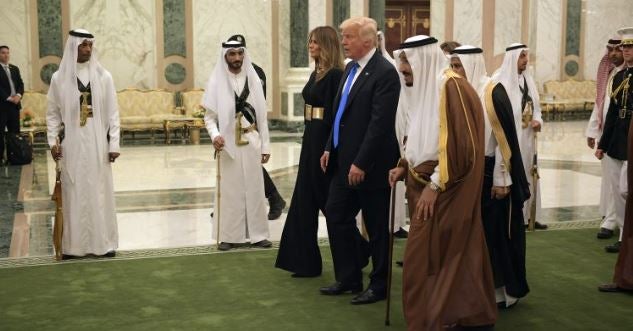 And you see Trump being treated better, with more respect than you got, and I guarantee you, if you’re Obama, it would make you fume. And I’ll guarantee you that Michelle Obama’s doing a Rosalynn Carter bit, jabbing him, “You gonna let him get away with that?” Remember Nixon’s funeral? It’s the exact same thing, folks. At Nixon’s funeral Bill Clinton grabbed a bunch of ex-presidents and party-goers and put them on Air Force and they flew out there to San Clemente, and they all attended. And they had Henry Kissinger there and Reagan and Nancy were there. Henry Kissinger was there and they were all, they were all just raving about Nixon. It was unreal. 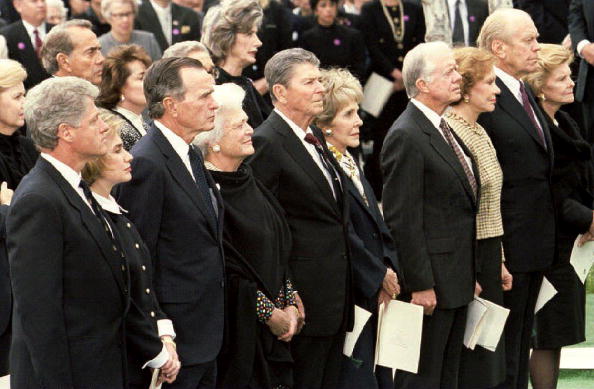 Kissinger got up there. Bill Clinton was raving about Nixon. Hillary didn’t say anything. She tried to put Nixon in jail, so she didn’t say anything. And Jimmy Carter is sitting there unbelieving what he’s watching. He cannot believe this. And Rosalyn’s sitting there next to, she can’t believe it. And I just know that when that funeral was over, Rosalynn Carter said, “Jimma, are you gonna let this stand? This guy, Watergate, and he’s portrayed as a greater president than you, and he was this and that and listen to these people. You think they’re gonna say — you better do something,” jabbing him.

And he began Habitat for Humanity shortly after the Nixon funeral. ‘Cause Carter, his administration was a bomb, it was a bomb economically. We had to have the misery index to actually calculate how rotten the economy was during the Carter four years. Do not doubt me on this. Rosalynn Carter was a vicious loyalist. I say that in a complimentary way. She stood by her guy. She wasn’t gonna let Jimmy Carter get run down.

And I guarantee you, they could not believe what they were hearing, with Nixon being praised, his outreach to China. Kissinger was talking about the brilliance of Nixon and all this. And I guarantee you this happened with Trump. Remember, they think he’s the biggest walking joke ever. He’s the biggest buffoon. He stole the election, he worked with the Russians. He’s uncouth, he’s barbaric, he’s a pig. And here everybody overseas is in love with the guy except NATO and Theresa May.

And Obama’s sitting there fuming about it. So what does Obama do? Obama has to get it on the act. He just can’t let this go by. He just can’t let it exist on its own, so he goes over to Berlin to the Brandenburg Gate near where he made a speech as a candidate, and he had to start running down parts of Trump’s agenda.

RUSH: Okay. Here is Obama in Berlin this morning.

OBAMA: In the eyes of God, a child on the other side of the border is no less worthy of love and compassion than my own child. We — (applause) — we can’t distinguish between them in terms of their worth and their inherent dignity and that they’re deserving of shelter and love and education and opportunity. We can’t isolate ourselves. We can’t hide behind a wall.

RUSH: It’s not about any of that. Notice the God echo is back with Obama. Under that theory, we ought not have borders. Under that theory, we can’t keep anybody out. We need to welcome everybody in. If the measure here is love and compassion and their worth and their inherent dignity, and if they deserve shelter and love and education and opportunity, then we have no business denying anybody here.

This is the way leftists do it. They put in these emotional, illogical, and irrelevant terms, and they make people’s hearts melt, “He’s so wonderful. He cares about people.” And so you get open borders, you get open borders in Europe. And, by the way, it’s always a one-way street. Why are these people incapable of shelter and love and compassion in their own countries? That’s a good question.

But Obama would say because their countries are poor and war-torn, and the United States has had a role in that. Poverty around the world has been exacerbated by the existence of the United States. Our wealth is way out of proportion to the rest of the world. It’s unfair that we have so much, particularly when so much of what we have, we have because we’ve stolen it. We have appropriated it from other people. We owe them.

And it is the basis of all left-wing thinking on immigration, can’t deny anybody. And so we can’t live behind walls. And we can’t hide. Nobody is hiding. There’s not a single person that’s hiding. That is not the point. But I’m telling you the fact that Trump is being feted in so many places, is eating Obama alive. Here’s one more bite.

OBAMA: Something I’m very proud of is health care reform in the United States.

RUSH: What, destroying it, you mean? 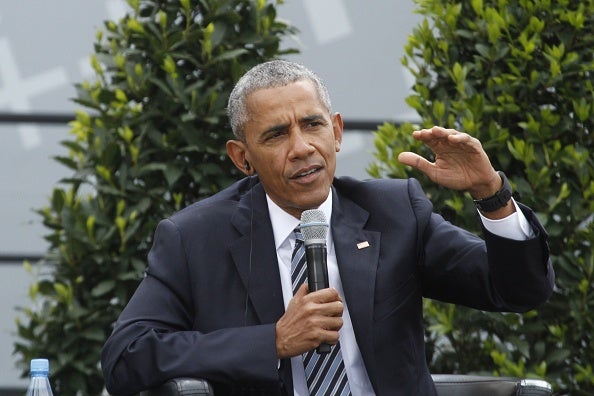 OBAMA: We are unique among advanced countries that we don’t have universal health care. My hope was that I was able to get a hundred percent of people health care while I was president. We didn’t quite achieve that, but we were able to get 20 million people health care who didn’t have it before. And obviously some of the progress we made is now imperiled because there’s still a significant debate taking place in the United States. For those 20 million people, their lives have been better.

RUSH: Right. So again, you want talk about interference, you want to talk about collusion, here is Barack Hussein Obama selling Obamacare. What he’s doing is fighting for his legacy. And that’s what the political assassins in the American media are doing, essentially protecting the Obama legacy. Doing everything they can to deny all aspects of the Trump agenda to protect the Obama legacy. ‘Cause it really wouldn’t take much to improve. Obama’s growth was 1.5 percent. We beat that. Health care is an absolute disaster. Insurance companies left and right are now leaving Obamacare exchanges. Abject disaster. It wouldn’t be hard to improve on it.

RUSH: By the way, one more thing about Obamacare. It was designed to collapse to facilitate going to single payer, and that’s what’s imperiling it. It’s not being imperiled by debate. Obama said, “And now debate in Washington threatens Obamacare, American universal health care.” Debate is not threatening anything. Barack, you got nothing to worry about. The Republicans don’t want to get rid of your stinker health care plan anyway. Obama’s got not a care in the world. It was designed to implode on itself. It was designed for private insurers to get out of it, paving the way for government to move in as the only insurer, ergo, single payer. Everything’s happening by design.

And when the Republicans have no desire to change it and repeal it, what are you bellyaching about, Barack? He’s bellyaching because Trump is attacking his legacy, pure and simple. He doesn’t care about the specifics of all this.