The Russia Narrative Begins to Unravel

RUSH: Folks, I tell you, I really believe, I weighed very carefully whether or not to say this today, but I really believe the progressive-led attempt, the agenda of delegitimizing the Trump presidency, is beginning to unravel. We’re not there yet, but it is beginning to fall apart. Take a look Carter Page. He’s somebody that knew Trump on the periphery.

Despite all of it, as you know, there is no evidence of any collusion. Collusion is not a crime even if there were evidence of it, but there is no crime that can be found, and there is no collusion. There’s nothing there. Carter Page, zip. The news on Carter Page is the Democrat committee gonna be looking into this has been salivating over his upcoming testimony. Their tongues have been on the sidewalk panting earnestly awaiting his arrival because he had the goods.

So now Carter Page testimony has been postponed indefinitely, and Trump’s out there tweeting that’s ’cause they’ve got nothing. In fact, it could well be that what Carter Page would say would embarrass the Democrats rather than nail Trump. So the Democrats now don’t want to hear from Carter Page and Trump is all over it tweeting to the effect that the Democrats bit off more than they can chew here. That Page doesn’t know anything ’cause there isn’t anything to know in terms of collusion.

So Comey, nothing there. Manafort, nothing there. Flynn, he’s offered to give documents to a committee, but there’s nothing there. So they go for Jared Kushner. And the reason they go for Jared Kushner is ’cause they’re bombing out on all these other people, and they are 1,000 percent invested in this story. Don’t forget, Democrats are so worried that they’re trying to talk their base supporters off the edge of the cliff, because the day’s gonna come when they have to announce that there will not be any impeachment.

Maxine Waters is out there saying that voters are getting fed up with the fact that there hasn’t been an impeachment yet, and they’re desperately waiting for an impeachment. The LA Times is running front-page stories to benefit anti-Trumpists on how to maintain their sanity while waiting for impeachment, essentially. There isn’t gonna be impeachment, at least on this, and if there is it’s gonna be trumped up. I don’t mean to be double entendre there or issuing a pun, but it really is starting to unravel on them. 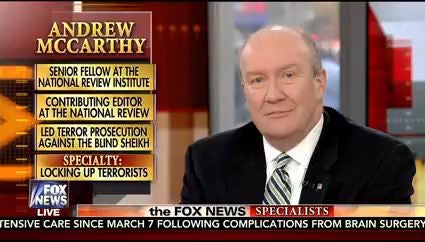 And Andy McCarthy made a brilliant point on the tube last night. Grab audio sound bite number 17. He was on with Eric Bolling on the Fox News Specialists and Eric Bolling said, “Andy, you’re a friend of Rush Limbaugh,” it makes you a great guy. He didn’t say that. I just threw that in. He said, “You’re a prosecutor. Is there any ‘there’ there?”

MCCARTHY: There’s no “there” there as far as the collusion conspiracy is concerned, but I think the thing that happened this weekend that’s really important that people miss because they’re so giddy about this story about Kushner, is it blew up the collusion conspiracy. Because if there had actually been a collusion conspiracy, there would already be back channels to Russia. There’d be no reason for Kushner in December, weeks after the election, to need to set up a back channel to Russia had there been one during the campaign. So I know for the moment they’re loving the story. But I think it’s kind of exploded the story that they’ve been telling us for six months.

And they haven’t found diddly-squat because there isn’t diddly-squat. And all the three or four people they thought were gonna have dynamite information are now kind of flittering away, Carter Page, Manafort, Flynn. So they drudge up Kushner as a last-ditch effort here, close to Trump, son-in-law, all of that. And the left, if you put a bag of manure in front of them, they’ll eventually step in it. And, in this case, they may have, because as Andy points out, why would you try to set up a back channel in December if you already had one that’s so good nobody can find it?

Now, it’s a shame that we have to use logic like this to make the point, but whatever it takes is necessary. All of this is so ridiculous.

RUSH: The media has so focused on this, they have gone wall-to-wall with it, particularly CNN, the New York Times, the Washington Post, that they have created in the minds of a certain percentage of the population in this country that there was collusion. That Trump is illegitimate. That his presidency is not real because it was fake, the election was fraudulent.

There are people who really believe this, above and beyond the Democrat base. And when there isn’t gonna be anything resulting from this in terms of prosecutions, criminal allegations, or what have you — well, we’ve got that, but there isn’t gonna be teeth to it — this over-the-top behavior is gonna come back and bite these people, and they’re going to continue to lose elections.

Now, the media isn’t gonna be affected by it. That’s the one thing. The media is not gonna be harmed. The media is not — well, I say that, but they are. I mean, the media reputation is already in the gutter. But that doesn’t matter. They are still there and they are going to continue to be who they are no matter how embarrassing something turns out to be for them. Because they’re the ones that write the narrative each day, so they’ll be able to massage this, as they’ve been doing for a year.

The latest on the Kushner situation is a letter, supposedly the Washington Post has had since December. But they don’t know if it’s real. And it talks about Kushner’s back channel stuff. And apparently they’ve had the letter, somebody read it to ’em and gave it to ’em, but they will not divulge it. They will not explain anything in the letter. It’s a source. It’s something they’ve been using to claim that Kushner was the one charged with setting up the back channel for Trump to Putin and so forth. They won’t release the letter.