Media Captivated by My CNN Commentary

RUSH: You know, it always amazes me what happens on this program that’s gonna get picked up and smeared — not smeared — broadcast all over everywhere else in the media. And there are two things. Yesterday on this program I offered the opinion that Trump may in fact spell the end of CNN. That he’s driving them crazy to the point that they are imploding. And it’s gotten even worse since we were here yesterday. Now there’s CNN people saying that Trump is putting all journalists at danger from gunfire around the world now.

But this Russian story obsession that has nothing to it is driving them nuts and they’re making fools of themselves, and this has been all over the media. They have assembled panels to discuss whether or not this might be the end of CNN! Is Rush right? Could this be? And of course there are people that come along and agree.

The other thing that has captivated the Drive-Bys is my comparison of Little Jim Acosta at CNN to my little cat chasing a red laser pointer. That has captivated people. I mean, they’ve written about it; they have spoken about it. It’s just a little analogy. I mean, you have a cat, if you have a cat. It doesn’t matter, kitten or cat — and they never catch on to it, it’s the most amazing thing — grab a red laser pointer and point it near the cat on the floor, on the wall, or on the side of the sofa, and the cat will try to catch it.

If you point it right in front of its paws the cat will swat at it trying to catch it. And it never can and never figures it out. It looks at me plaintively like, “What’s going on?” And that’s when I double down on the torment. And I said this is what Jim Acosta reminds me of, what they’re doing to him in the pressroom. They got him crashing into walls. They’ve got him falling off the sofa. And that has been picked up. We got the audio sound bites of this to illustrate. 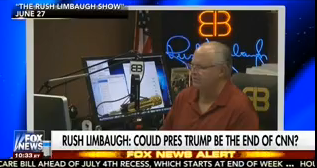 RUSH: I mentioned at the top of the program that I’m always, even now after all this time, I’m still surprised over what happens on this program that makes it beyond this program. For example, I think this program is chock-full of unique, insightful, intelligent brilliance every day. And we also do some lighthearted, irreverent, and humorous things. And a couple of those have leapt beyond the surly bonds of this program and found their way into the Drive-By Media.

One of them is my belief, as stated yesterday, that we could be watching the death throes of CNN. Now, that’s a long shot. I mean, there’s always gonna be a CNN like there’s always gonna be an America, but what’s it gonna be, is the question. The New York Times is a close second and the Washington Post. CNN, wall-to-wall Malaysian airliner, wall-to-wall on just the oddest things, Ferguson, Missouri, they wouldn’t leave that alone, they tried to hype it.

It is clear to me that CNN has chosen an objective, and that is to destroy the Trump presidency. There’s no doubt in my mind that’s their objective. They have focused on it since the election, and it’s getting more intense. And with each day the realization that they’re failing is driving ’em nuts. And now they’ve got this reporter, Jim Acosta, who is melting down almost daily here over procedures in the White House pressroom, not turning on the cameras, journalists all over now claiming that Trump is going to get them shot because the way he’s talking about them. Wow.

RUSH: I made mention of Jim Acosta being like a cat with the laser pointer crashing against the wall and the floor, running into sofas, all trying to catch Trump, never able to do it, looking like a fool. These two things made it as discussion items on Fox News and elsewhere. We start with Tucker Carlson last night. He spoke with Mark Steyn, our fill-in host, about me and my comments that Trump may be the person that brings about the end of CNN. And this was part of the conversation. 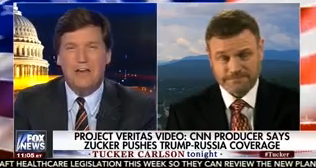 CARLSON: What about the prediction, you’ve heard Rush Limbaugh, who you sit for sometimes, say that they’re going to be a casualty of the Trump administration?

RUSH: It’s true. And in that Washington Post story last Friday it’s a story about Russian collusion with Trump, and there’s no mention of Trump in the story. So later that night on The Five, which has now been moved to nine so they should call it The Nine. But actually they don’t call it The Five ’cause it was on at five p.m. They call it The Five ’cause there are five different personalities on there. So they played a clip of me on the program yesterday to begin a discussion panel.

RUSH ARCHIVE: Could Donald Trump be the end of CNN? What a legacy that would be. I think that’s what the Trump administration is doing with many in the media. They’re like cats. He’s got this little red laser light and he’s just causing them to make fools of themselves and everybody’s laughing at ’em as they’re crashing into walls.

RUSH: Jesse Watters is on The Five now at nine o’clock, and he had his two cents to weigh in with. 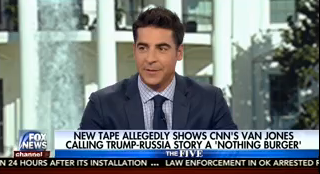 WATTERS: Trump reminds me of Road Runner. So he runs really fast, and then CNN’s Wile E. Coyote. So Wile E. Coyote chases Road Runner over the edge of a cliff and then all of a sudden Wile E. Coyote looks down and there’s nothing underneath. That’s CNN right now. Splat. And they hit the pavement. But Trump has this effect on people. Rush was talking about the laser beam and I’ve said it before that Trump brings out the best in people and the worst in people. Right now he’s bringing out the worst in CNN.

RUSH: I like that Wile E. Coyote example. I really like it. In fact, I used to it back in January.

RUSH: The Drive-Bys are in panic. You gotta look at ’em as Wile E. Coyote; you gotta look at Trump and his team as the Road Runner. Wile E. Coyote still has no idea what’s happening. They’re trying to continue to destroy Trump in the age-old ways they’ve succeeded. It’s all backfiring on them.

RUSH: Now we move to Hannity last night on the Fox News Channel and he had as a guest the recording artist Kaya, Kaya Jones, and of course they’re talking me, the EIB Network. Hannity says, “When you really think about it, Donald Trump is saying fake news, fake news, fake news, and they keep falling right into the trap. I think Rush is right.” 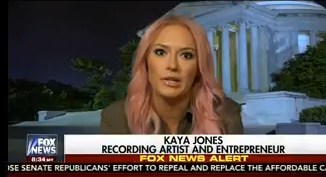 RUSH: Very perceptive there on the part of the Kaya Jones, using the press briefing to drum up fake stories. That’s one of the reasons why they’re so mad that the cameras were turned off. The cameras are back on today. Sarah Huckabee Sanders doing the briefing. Right now Steve Mnuchin is at the podium. He’s Treasury, right? Yeah, Treasury secretary announcing some new sanctions on the Norks, on the North Koreans. And the cameras are on. She’s right. CNN and others used the cameras to act out and create fake news.