RUSH: He’s rolling back all of Obama’s executive orders on regulations, the EPA. I mean, Obama did more than you’d ever know. I mean, a lot of what Obama did with executive actions and odors and phone calls, it wasn’t reported. And if it was reported, it was celebrated. The media loved Obama. Whatever he was doing was unassailable; it was great. A lot of what Trump has done has been to roll back, like reducing the regulations, like enforcing immigration law. That’s all Trump has done. He’s not invented new law. Obama made sure that federal immigration law was not being enforced. Trump’s done the opposite. 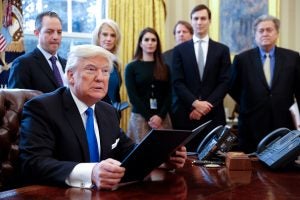 RUSH: Now, I’m sure Trump’s had some executive orders that some people might say are extraconstitutional. I can’t think of what they are off the top of my head, but I’m not gonna sit here and tell you there aren’t any. But Obama’s were almost entirely done because he couldn’t get the legislation he needed passed, so he went ahead and did it. Obama knew the media wasn’t gonna rip him. Obama knew the Democrats were gonna support him. Obama knew the Republicans were not gonna be serious ripping him, and if they did, the media wasn’t gonna promote it. Obama had a free rein on this. What Obama did the Iran deal, some of this stuff has got to be rolled back and changed. In fact, there’s a couple things I have in the Stack today that actually address this, if I have time to get to it all. But do you have a point beyond that or was that just your question?

CALLER: No. Just a question. I really didn’t understand that. But thank you. I appreciate that.

RUSH: You bet. You bet. We’ll find out. I’m sure we’ll hear from people who think Trump has gone outside Constitution. But even the Drive-Bys have not alleged that. They go after Trump, “He doesn’t even know what he’s doing. He’s an idiot. He’s stupid. He’s orange. He’s a pig.” But they haven’t said that what he’s doing is — the travel ban, you know, that was not unconstitutional. That was entirely legal. It was the judiciary that behaved unconstitutionally there by denying him. He’s got federal statutory law behind him a hundred percent in that travel ban that liberal judges tried to stop. So I think he’s on pretty safe ground in that area. I wouldn’t worry about that.