The Left Lies to Itself About NFL Ratings and Attendance

RUSH: To the phones, Kokomo, Indiana. This is Bill. It’s great to have you, sir. Hi.

CALLER: Yes, sir. Great honor. Like you, I’m interested in the NFL ratings and how the politics plays into it, and so I was checking to see what the ratings were doing this year, and the first story I linked to on a Google search said that the ratings decrease this year was due to the protests started by the folks that were upset by Colin Kaepernick’s treatment by the NFL. And I thought that was kind of funny because for like the last year, folks have been bending over backwards to try and tell us that the people who were boycotting the NFL because of Colin Kaepernick taking a knee, that had no effect. 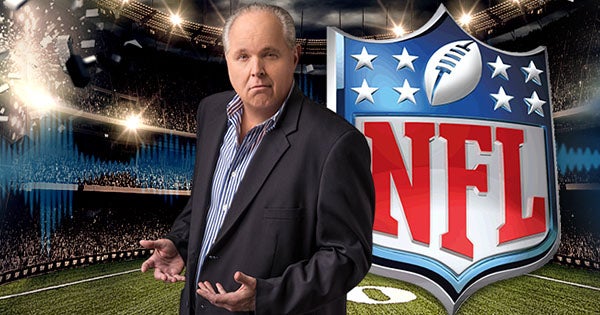 RUSH: Wait a minute. I want to be sure I heard this right. You went on a Google search and they threw at you a USA Today story which says the reason the NFL is losing audience is because people are upset, not at Kaepernick, but rather upset at the way he’s being treated by the NFL?

CALLER: Yes, sir. I believe it was — the USA Today affiliate. And they went on to list how many Twitter followers he has and 30,000 people this and 300,000 people that. I thought it was really funny, because all I’ve heard for a year was, well, everybody’s watching because their cable is getting cut or they’re cutting the cable, that Kaepernick had nothing to do with any of it.

RUSH: You know, that last point, cord cutting, that’s happening faster than anybody thought. I don’t think I printed this. I saw it over the weekend as I was perusing the tech blogs. So cut me some slack if I don’t remember the number right. But it’s — oh, this can’t be. It’s something like 35 or 40 million people have canceled satellite cable over like a six- or eight month period, in order to go streaming and so forth. I’m gonna have to find the story.

But regardless what the number is, people cutting the cord, that is canceling cable or canceling satellite. It is happening fast. It’s all Millennials, most of it, and it’s happening much faster than anybody thinks. That obviously is gonna have an effect on live TV ratings. There’s another aspect of this, that millennials are watching TV but not live. You know, they’ll watch, let’s say The Last Ship. The Last Ship’s a TNT show that airs on Sunday. They’ll watch it, but during the week.

They won’t watch it live as it is aired or broadcast live. And that’s a ratings challenge. You know, find that viewer. Nielsen measures real-time viewing. They’re trying to accommodate DVR, people that record programs on satellite or cable and watch ’em later, but streaming, that’s a whole other challenge to get those. So it may well be that it’s not that fewer people are watching, it’s just how, and the ratings people are having trouble catching them.

They’re trying to create that narrative, that viewers are actually in Kaepernick’s corner. It’s just the opposite. And I’m gonna tell you something else now. These pregame protests that take place on the sidelines, they’re now beginning to happen in the game. And that ain’t going to help. “What do you mean it’s happening?” Well, one instance yesterday. The Bennett brothers, Martellus Bennett plays for the Green Bay Packers. His brother Michael Bennett plays for the Seattle Seahawks.

Michael Bennett was in Las Vegas recently, before the season started. He was in a strip club or some other similar type establishment where gunfire broke out. The cops were called. Among the people fleeing the scene after the cops told everybody to stop where they were was Michael Bennett. So the cops, entering a scene like that, gunfire, everybody is worried about being shot, so they tell everybody to stop, hold your ground, put down your guns. If anybody doesn’t and starts running away, they’re gonna get chased.

It’s what happened, and Michael Bennett said they threatened to blow his F-ing head off and said they treated him like some third-rate citizen because of race. And his brother for the Packers, Martellus, who obviously supports him and a lot of NFL players support him. We don’t know what really happened. I don’t think he had anything to do with the event. It’s just that he ran when they told everybody to shut up. Well, yesterday he tried to do the black power salute on the field after a play. I didn’t see it. I don’t know if he’s an offensive lineman, defensive lineman. He made a sack or something.

They’re telling us he gave the black power salute, but his fist wasn’t closed. His hand up in the air, like John Carlos and the other guy at the Mexico Olympics in 1968, he did the black power salute, and it looked like he was emulating that. Whether he did or not, it was reported that he did. And so it has been reported that a player has continued to protest the racism of the NFL actually on the field. He does sit down and take a knee during the anthem and he has two Seahawks players on either side with their hands on his shoulder offering support, one black, one white. 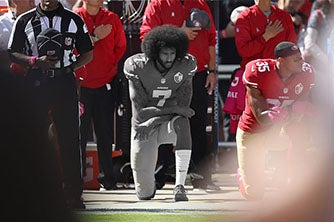 They’re making a spectacle of this, and it’s growing, these protests are growing, they’re not being cut back. Certain owners like Jerry Jones and Clark Hunt, Cowboys and Chiefs, are asking their players not to do this, to respect the country, to respect the flag because it’s a respect for the fans. It’s respect for the people who are paying to enter the stadium and watch the game. The owners are asking, “Please respect them, if you don’t think you can respect the flag or the country.” I don’t know if there’s been any protest of the Cowboys or Chiefs players.

You’re gonna continue to lose elections. You’re gonna continue to support candidates who are gonna lose elections. You go right ahead. You purposely want to misread the majority thought on culture, morality, patriotism, whatever it is, if you want to misread it in the sports media, in the Drive-By Media, you go right ahead. Be my guest.

CALLER: Hi, Rush. Great to talk to you.

RUSH: Thank you, sir. How are you doing?

CALLER: Good. I’m doing good. I’ve been enjoying your show for a long time. I appreciate what you do.

RUSH: I appreciate that, sir, very much. I really do.

CALLER: So I wanted to give you a little bit of fuel for this NFL issue. I believe also that if you are lucky enough to be a professional athlete, it’s only because you live in this country where you have that ability, and it’s really a shame that some want to disrespect that. And I’m really glad to see that the attendance and everything has gone down and the people watching TV has gone down because of it. I heard you weigh in on that during your first hour. So I was eating lunch during your second hour, and the TV at the restaurant was on ESPN, of course, and they were also talking about the statistics of the poor attendance in LA. They attributed that, the very first reason, to the stadium being old, broken down, and in need of replacement, repair, whatever to get the attendance back up.

RUSH: Which stadium? The LA coliseum?

CALLER: Exactly. And it was an awesome game, too.

RUSH: It was. A bunch of Texas people were staying at the hotel I was staying in in Beverly Hills. Those people, you know ’em when they get out of their limos. You don’t need the big long horns on their hood. And it’s not the ten-gallon hat. You know the Texans when they’re walking around the hotel. You just know that they’re there for — look, the LA Coliseum’s been around a long time. It’s not the best neighborhood. But USC doesn’t have any problem. I’ve heard people say, “Rush, that’s a different thing. You’ve got students who are there on the cheap. College fervor is much different than a capitalistic enterprise.” 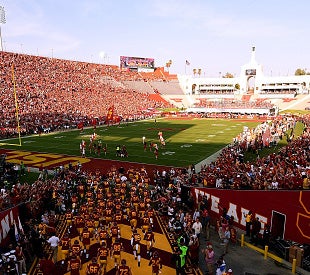 I don’t care. They still sell tickets. You still have to drive there. You still have to party, buy the beer, the popcorn — well, beer at college games may not be allowed; I don’t know. But still, you gotta buy the concessions. You gotta put up with all of it. You gotta sit on uncomfortable bench seats and all that stuff. You sit out in the sun, if that bothers you. It’s the same circumstances the Rams or any other pro team has to deal with. You think about this, the NFL — you would think an enterprise this big would want be to honest when people are not watching on TV as much and not going to stadiums, you’d think they’d want to really know what’s going. And by the way, did you see pictures of the crowd at the LA Coliseum on Sunday?

RUSH: And the Stub Hub down in Carson where the Chargers were playing, 27,000. That wasn’t filled. Last week the 49ers, brand-new state-of-the-art stadium, WiFi better than anywhere in the league, it’s not filled. They’re empty seats all over the league. The NFL is concerned about studio show now. There aren’t any blackouts, every game’s on TV, home games and so forth. I would want to know why people aren’t watching or attending. I’d want to know the real reason so I could change it. And if they’re lying to themselves, if they’re thinking people are staying away because they’re mad at the way the league is treating Kaepernick?

A sportswriter went to a game as a fan, figured the average cost, and I forget where, $500 to take a family to a football game. Now, given that’s leisure dollars and that’s a discretionary, you don’t have to spend that. That’s a lot of money to go to a football game where you might have to watch the flag being protested or you might have to watch the country being protested. If I were the NFL, I’d want to know what the truth is, wouldn’t you?

CALLER: Yes, absolutely. It’s just amazing to me how fast the excuses come out other than the real reasons we know they are.

RUSH: Well, ESPN, they’ve got a financial interest. I mean, they’re paying over a billion dollars a year for one game a week. Monday night game. And they don’t even get the best games on Monday Night Football. Those go to Sunday night on NBC, which doesn’t pay as much as ESPN does.