RUSH: This is Mary Jane in Deerfield, Ohio. I’m glad you called. What’s up?

CALLER: I tell you what, I’m so happy to have you answer the phone. It was just like a dream come true. Anyway, I was listening to you yesterday and earlier today talking about Nancy Pelosi’s town hall meeting. And I really think that it was staged. If you saw the meeting from the beginning —

RUSH: And why was it staged?

CALLER: Well, if you look at the whole thing, at the beginning Nancy’s talking at the podium and she’s got a whole group of people sitting nicely on chairs in front of her, and they’re talking. And then the camera pans to the right, and you can see these young adults over there standing, and they start marching in on her. Now, they all have little papers they’re reading from. The one girl’s saying one thing and then they all repeat it, and it was staged. Nancy didn’t have her usual look of threat, you know, like when she’s confronted. She usually has this look —

RUSH: You can’t tell whether, but wait, wait. Hold just a second here.

RUSH: Because the camera turned to these people before they started moving, you think they were in on it, too?

CALLER: Yes. They were.

RUSH: Let’s listen to it. We have the sound bite in question here that Mary Jane thinks was actually a staged and scripted event. This was Monday, San Francisco, Pelosi held a press conference to urge passage of the DREAM Act so that the DACA kids would be allowed legally to stay.

PELOSI: For a long time we’ve been fighting the fight for the DREAMers.

UNIDENTIFIED MALE PROTESTER: You have the audacity…

CROWD: You have the audacity…

UNIDENTIFIED MALE PROTESTER: …to tell us…

UNIDENTIFIED MALE PROTESTER: …that you have been fighting deportation…

CROWD: …that you have been fighting deportation…

PELOSI: …what you’re talking about.

RUSH: “All 11 million, all 11 million.” And she says, “You don’t know what you’re talking about.” You think the whole thing was staged, scripted, it was a performance?

CALLER: It was. It’s a thing, a bargaining chip —

RUSH: For what purpose?

CALLER: — that she’s gonna use in order to — 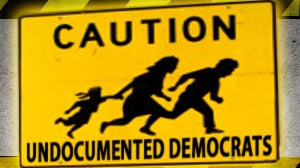 CALLER: Well, she’s gonna use this as a bargaining chip at the end so that they can get as many people on amnesty. The people that voted for Trump, we don’t really have a problem with giving these kids that were brought here at a very young age to maybe get some kind of a something. But to get all their family and make them all citizens, we’ve already done this once. We did it back with Reagan, I think it was. And they promised a wall then. We have a real serious problem here.

RUSH: Right. Now, that was 1986. That was Simpson-Mazzoli and we amnetized or anesthetized, if you will, about three million, and with the assurance they’re gonna secure the border and it was never gonna happen again. And of course now we’re up — they say 12 million. It’s gotta be much more than that.

RUSH: Now, one other thing here. There’s another aspect of this that’s just caught on that people now just routinely say that I am suspicious of. They were all brought here as young children and didn’t know what was happening. It’s not their fault. Tim Cook from Apple. Hell, everybody’s out there saying this. We don’t know who these people are. They’re not all kids, as it turns out. You’re right about that. They keep telling you it’s 800,000, some of them came on the trains from Central America a year ago without their parents.

RUSH: But when you say they’re children and we can’t round up children, there is not a single country in the world that permits illegal alien children to stay and become citizens, not a single country. And there’s a reason for it. If they did, then no other restriction would matter because you couldn’t keep a child out if that were the law. And that’s the dangerous thing about this. But I’m still fascinated you think the whole thing was scripted and she was in on it —

CALLER: If you watch the whole thing. That part that you played was after the fact. Those people had all swarmed in from the side. If you get the beginning of that, there’s a whole bunch of people just sitting in chairs. And these people were off to the right side all standing there. And they swarmed on her. I don’t know they probably — now you don’t see that anymore. You don’t see that part. And the thing of it is, if you see the whole thing, it was definitely staged. And Nancy was not surprised, like her eyes aren’t bulging out like they usually are.

RUSH: You may have a point on one thing. A lot of people would have to be paid to swarm Nancy Pelosi. That’s something they would not do on their own. But I get your point. The whole thing is staged. The left does pay protesters. I mean, half of Occupy Wall Street was employees. Black Lives Matter, a lot of these are George Soros financed and bused in people, some of them are. But you think the purpose of this was to anesthetize much more than just kids?

RUSH: Well, why protest Democrats? Why protest Pelosi, then?

CALLER: Well, it’s just so that she can say, “Look what they –” Believe me, hey, I listen to you, I’ve been listening to you since you were on TV. And I just love you, Rush, and I love all your group, but the thing of it is I really do think that the Democrats, the upper echelon Democrats, they don’t do anything that they don’t know what’s gonna happen. They don’t do it.

RUSH: I understand your thinking, that this kind of thing could have been prevented, that spontaneous things like this are never spontaneous, particularly when they happen to Republicans. The downside of this is, it’s not how it’s been reported. The way people saw this, aside from the very highly attuned and aware like you, most people saw this, “My God, these people mad at Democrats. They’re mad at Chuck and Nancy.” Which they don’t see that. Democrats don’t get protested this way.

So your view probably is special and a little bit minority view in terms of numbers. But I will ponder it. Because elements of what you say are absolutely true in terms of history. They do organize, they do practice, rehearse. They do pay protesters to come in. There are scripts. I’m glad you called. I appreciate it, Mary Jane.