RUSH: This is a montage. In addition to the media desperately trying to make everybody believe that Trump’s voter base is abandoning him because of this return, the election last night in Alabama, they’re all trying to say that San Juan and Puerto Rico is Trump’s Katrina. They are attempting to establish a narrative that Trump doesn’t care about people in duress.

They’re attempting to establish a narrative that Trump doesn’t care about Puerto Rico or the people in Puerto Rico, and they’re trying to recreate what they created during Hurricane Katrina and George W. Bush. Again, that’s all they’ve got is to go back to their greatest hits and try to play ’em again. Instead of New Orleans Katrina, this is hurricane whatever it was and Puerto Rico. And here’s a media montage where they Drive-Bys openly express their hope.

GERALDO RIVERA: This is an extremely dire situation. It’s going to become the kind of screwed up response that Katrina was.

NYDIA VELAZQUEZ: This is going to turn to be Mr. Trump’s Katrina.

KATE BOLDUAN: This could turn out to be Donald Trump’s Hurricane Katrina.

CHRIS MATTHEWS: Is this Katrina?

EUGENE ROBINSON: It could turn into Katrina or something worse than Katrina.

ADRIANO ESPAILLAT: This could be our modern day Katrina.

ERIN BURNETT: Is this his Katrina?

LUIS GUTIERREZ: I want you to think of Katrina.

BRIAN WILLIAMS: Reminiscent of a storm I covered in New Orleans a few years ago.

SUNNY HOSTIN: I hope it’s not because Puerto Rico has a lot of brown people.

RUSH: There you have it. That was Sunny Hostin. Sunny Hostin there on The View, “I hope it’s not –”

RUSH: I saw Geraldo down in San Juan. Snerdley walked in here today and Geraldo is sitting at a place that looked like a bar at a resort down in Puerto Rico. I said, “The place must be in trouble. Geraldo’s there.” 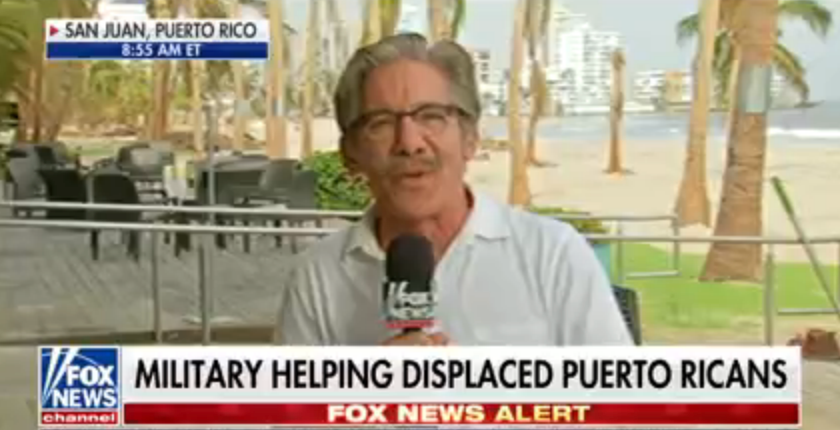 The grim reaper has been sent. When Fox sends Geraldo somewhere, death somewhere has happened. You make book on it. And he was down there saying it’s Katrina. It’s all made up. It’s the media hoping that what they report becomes true. They’re trying to make it true. They’re all-in on it. And it isn’t going to work, either.

I wonder how long it’s gonna take for them to realize that the greatest hits from their playbook will work against a Romney or a George W. Bush or anybody else in the insider elites, but it’s not gonna work against Trump. How long is it gonna take ’em to figure this out?

RUSH: This is Russ from Kansas City. Great to have you, Russ.

CALLER: Good afternoon. Give me 11 seconds. I’ve got just a few things. I’m in earnest agreement with you Rush. Number one, President Trump knows exactly what he is doing and saying. He has a war room, I believe, so to speak, and a flowchart on everything that he says with an anticipated outcome to a 95% factor. President Trump says things in public that we, his base, have had to say in private for at least the last eight years. He is our voice. His comments are proactive instead of reactive over 90% of the time.

I believe he has a storyboard of tweets all ready to go at least 30 days in advance. All he’s waiting for is a Dem to ask for it, and he will deliver. President Truman and President Trump — outside the first four letters of last name being the same — are very similar in decision-making. They tell the truth. No guts, no glory. Neither lie. They tell the truth; that’s why it’s so easy to keep up with them. They don’t diddle daddle. Puerto Rico, I think, is a little bit different thing as far as sending help, because it’s not a state, it’s a territory, and they have massive financial problems that could affect other states. I’m not real sure about that. I need to do more research on it.

RUSH: Puerto Rico, you’re right. Everybody understands. This is why the media’s flailing away and missing big time. Puerto Rico is not a state, and there aren’t any pictures of nobody helping down there. They don’t know anything other than their greatest hits in the playbook. And all they know how to do is recycle ’em. Katrina worked against Bush, so it’s automatically gonna work against Trump. No. It won’t. They still haven’t come to grips — and I don’t think they ever will — who Trump is, but more importantly, who and what Trump is not.