Why Doesn’t This Guy Help Them Cross the River?

RUSH: You know, this is an old Sam Kinison bit, but I can’t help mention it. CNN’s got a reporter down in Puerto Rico right now, and he’s standing on one side of a river. The chyron graphic says, “Desperate Puerto Ricans Forced to Cross River.” This guy was able to get there himself. He’s probably got plenty of food and water for himself and his crew, and he’s standing there watching a bunch of Puerto Ricans unable to get where he is. So he is where they are trying to go, and they can’t get there, but he got there. 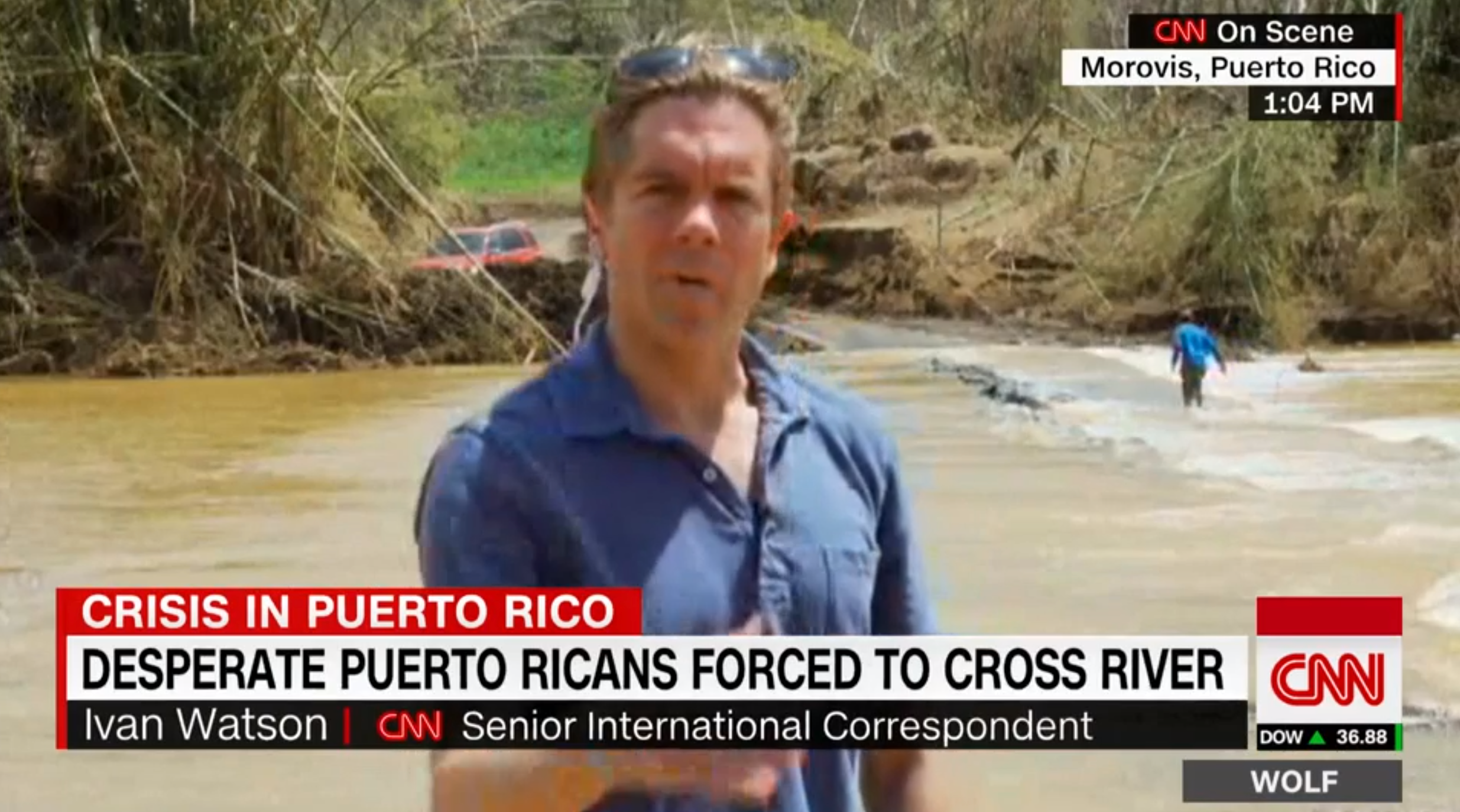 So he’s standing there. Does he not have the ability to help them get to where he is? Why do they have to cross the river to get where this guy is? “Well, crossing the river is very, very dangerous! I guess they could drown in there.” But this guy got across it somehow. The helicopter dropped him in or something. This has always amazed me about reporters at disaster sites. They are not starving. They are not dying of thirst. They’re not in danger, and they’re 10, 15, 20 feet away from reporting on people that are.

They don’t have… The old Sam Kinison bit on this… Remember Sally Struthers? Some of you may remember the charity that she either was the face of or she ran, but she would be pictured next to a bunch of literally starving kids in Africa. She was not starving at this point in her life. She’s standing next to ’em and she’s looking in the camera; she’s imploring people to send money. (impression) “Won’t you help? Can’t you see these kids are starving? Look at those swollen bellies! Can’t you see it? Doesn’t it just rip your heart out?”

See, the camera is watching these people cross the river. This guy is already across river where they’re trying to get. It’s the most mind-boggling thing in the world to me. What’s gonna happen if some people slip and die and start floating downstream? Is this guy just gonna say, “Hey, look at this! A citizen of Puerto Rico just slipped and is floating downstream. How horrible this is! You see how Trump doesn’t care?” with this guy standing up right there? Anyway, Sam Kinison said, “Sally, you got those massive swollen bellies and starving kids.

“You know you’ve got a sandwich in your basket there. Give them a bite to eat, for crying out loud, instead of begging people on TV to send you some money!” I mean, I laughed myself silly, but it was exactly right on point. Oh, now here’s a close-up of the guy so that we can see across the river where there is a bulldozer try to make the river crossable. How did the reporter get there? Did the reporter wade through the ravaging rivers with his camera crew in tow to get there? Why doesn’t he just send the CNN helicopter to get them and bring them across?

Look, I don’t know everything on the ground there.

This is my reaction as a viewer.