Washington Fetish: Get Rid of Trump

RUSH: Julie in Temecula, California. Great to have you. How are you?

CALLER: Hi, Rush. I’m great. Oh, I’m so happy to talk with you. I’ve been a listener since, let’s see, Clinton was holding us hostage on TV. Okay. That’s a while back. Anyway, I apologize because I only heard this once, so I can’t tell you where I heard it, but when Green from Texas began the impeachment process — 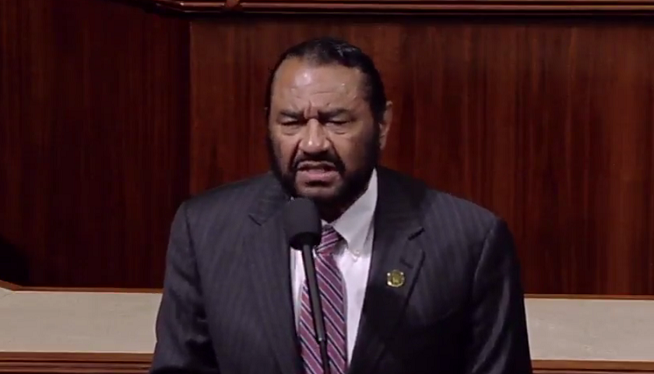 And the shooting in Las Vegas was used, it was used for so-called postponing it, making the Democrats look caring and they weren’t gonna do it. But they were mad at him. That’s why we didn’t hear from Maxine Waters, I’m sure. She kept her mouth shut on this. They were all mad at him. So he walked it back, perfect timing, this horrible tragedy.

RUSH: We mentioned this yesterday. Al Green is in the same league. Have you heard there’s a congressman from Georgia, his name is Hank something or other. Is it Hank Johnson? Have you heard of this guy? This guy was afraid of any action taken on Guam that would relocate people because he thought if you put too many people on one side of the island it would capsize it.

CALLER: Wow. I did not hear that.

RUSH: Right. I never heard of a population — never heard of an island capsizing, period, but Hank Johnson something. Al Green was an outlier. He was a lone wolf on this impeachment business. And, yes, when the shooting in Las Vegas happened, he very courageously went to the microphones and announced that he was postponing the impeachment proceedings against President Trump, of which there aren’t any, and he did not specify a date when he was going to recommence impeachment proceedings. So are you thinking he was trying to curry favor with people because of his show of compassion because of the Las Vegas shooting?

CALLER: Yes. He’s trying to show compassion, but he also realized that he misstepped, and this was before Mueller was ready. I mean, maybe he won’t ever be ready. It doesn’t sound like he does, although from some research I’ve done it looks like they don’t need a whole lot of reason to put this vote to Congress to impeach, but —

RUSH: Well, the thing about impeachment is that it is a political act. It’s not criminal. And so the whole definition of high crimes and misdemeanors, I mean, it can be criminal, but when I say it’s a political act, you can’t succeed with it unless the politics are right, because you have to have a trial in the Senate, and there have to be a majority of the Senate that will vote to convict. Otherwise, it’s a mess and you don’t try for it.

The House of Representatives presents the case. They select managers of the case, and each manager has a different aspect of the charges. Lindsey Graham was a house manager, for example, when they impeached Clinton. And that of course blew up because there was no way the Senate was ever gonna vote to convict Clinton, so the House was left hanging. And ever since then a lot of the House Republicans and conservatives who were in on that have now, it didn’t take long, became moderates, stopped being conservative. They wanted to dissociate themselves with that proceeding at all costs.

Now, what Mueller is doing is searching in desperation for a crime. The special counsel, according to regulations of the Justice Department, there must be an underlying crime for which the special counsel is appointed to investigate. Well, in this case there isn’t a crime. There are wild, basic, scandalous allegations and rumor in the media. And the Acting Attorney General Rod Rosenstein or Rosenstein appointed Mueller to investigate without a crime.

So Mueller is actually not properly convened here. That doesn’t mean anything. Mueller has hired a staff larger than any special counsel in recent memory. Most of them are Clinton and Obama devotees, donors, former employees. They’re all lawyers. And they’re looking for anything, they’re looking for anything that might prove that Trump colluded with the Russians or Trump did anything.

Now supposedly they’re looking ten years ago into Trump’s business practices, long before he even ran for office and before he ever did have anything to do with Russians for anything. They’re desperately searching for a crime. And I don’t think Mueller cares a whit about what Al Green was doing. Al Green is an acne pimple zit on the butt of a pig as far as Mueller and his investigation are concerned. There’s nothing that Mueller’s gonna do timing-wise with Al Green and vice versa.

Now, what they’re probably finding, I don’t know how they could not be finding it, as in-depth as they’re looking, they have to be finding really strange things that went on on the Democrat side. This Russian investigation, you know what’s missing in it? Mark Steyn points out, there aren’t any Russians. There aren’t any Russians in this investigation. How the hell do you have an investigation of Russian collusion with no Russians? The Russians involved here go to lunch. And that’s about it.

But on the Democrat side they did rig an election there. Debbie “Blabbermouth” Schultz rigged the Democrat primaries for Hillary against Bernie Sanders. And Hillary was committing crimes with her illegal email server. I don’t know how Mueller avoids that, avoids finding anything. I’m sure he can ignore it if he wants.

But I do think that your instincts are right, that the literal purpose for the Mueller investigation is to find a series of things that would qualify as high crimes and misdemeanors and would satisfy the Democrats’ political fetish with getting rid of Trump. Because this remains the objective of the Washington establishment, getting rid of Trump. And despite what takes over in the news, like right now the Las Vegas story is dominating everything, the Russian story is still there. These guys, they’re like ducks.

You see a duck swimming along on the surface the water, looks smooth and silky, and the duck is just gliding along, you hardly even notice it. You don’t see the duck paddling furiously beneath the surface. And that’s what the Mueller team is doing. They’re out there, but you don’t notice ’em and they get obscured and covered up by news events like the hurricanes or the massacre in Las Vegas, but they’re still out there.

And they’re not gonna go away until they find — there’s no time limit on ’em, and they don’t have any financial limit, so they can do this as long as they want, as long as it takes to get Trump. But it’s gonna have to be something that satisfies the politics of this. Because simply finding criminal behavior, criminal acts by itself, talking about impeachment, is not going to be enough.