RUSH: Noblesville, Indiana. Lynn, thank you. Great to hear from you. I’m glad you called.

CALLER: Well, thank you so much for taking my call, Rush. I just called, being in Indiana, I have a little bit of an inside track or feeling towards Pence that I think there’s some things that people are forgetting here. First, I don’t know how the rest of the world feels or how much history people really understand, but President Trump stood in front of the American people and the world, and he put his hand on a Bible and he swore to upheld the Constitution.

And part of the Constitution is that he is going to defend — provide for the common defense and stand up and defense our nation. And as commander-in-chief, who better to lead our country and set the example of standing up for the flag, the men and women who fought for and continue to fight for our country and our flag than the national anthem. I can’t think of anybody else who’s more qualified and who’s more demanded to do that than Donald Trump and the vice president.

RUSH: You know, that’s an excellent point. While you were speaking I was reminded of Trump’s numerous rallies during the campaign. What was the theme? Do you remember what his theme was?

RUSH: Right. “Make America Great Again.” And why did that catch on? Because a lot of people think that America’s under attack from within.

CALLER: Right. We need that. We demand that. And that’s why he won, because people are tired of having a leader and a commander-in-chief who is not upholding his constitutional and sworn oath to do that.

RUSH: Exactly right. In fact, it can be stated in an equally powerful way. Americans have grown tired of presidents and leaders who apologize for the country and who think that America is and has been the problem in the world. And, frankly, that was Barack Obama, and it is, to this day, many in the Democrat Party and on the American left.

People are sick of it. They don’t think of their country as evil. They don’t think of their country as the problem in the world. They think of America as the solution and as the answer to the problems in the world, such as economic, human rights, civil rights. There’s no better place on earth, and Americans are sick and tired of having their country derided or ripped. And so you go to Trump on the campaign trail, it wasn’t just make America great, it was obvious to anybody listening that he loved America and he was tired of people who didn’t and he was gonna restore that love and prominence.

And so you’re right. This behavior is entirely consistent. If you publicly are going to disrespect the flag and everything associated with it, if you’re gonna publicly disrespect the national anthem and the people who wear the military uniform, you are going to be pushed back against. And this is the first time that’s happened in I don’t know how long. There was no push-back during the Bush administration. Of course push-back in the Obama administration, the push-back was on the part of the American people.

You can call it a culture war or a series of battles, but this has been coming. It’s not going to reform itself, and it’s not going to go away. There isn’t a magic moment when the left realizes, “You know what? We’ve been wrong about this” and begins remedial behavior. I gave a speech at the 30th anniversary of the Media Research Center, and what they do at each annual event, they play clips of some of the stupidest, funniest, most outrageous comments members of the media make during the course of the year. And everybody just laughs themselves silly because they are funny.

But when I went out there, I reminded everybody, “Yeah, we’re laughing, but, folks, this is scary, because, folks, every one of those people that you just saw and laughed at believes it. They believe it.” Laughing at it we have demonstrated is not enough to defeat it. These people are gonna have to be defeated in the arena of ideas, and this is what it looks like. 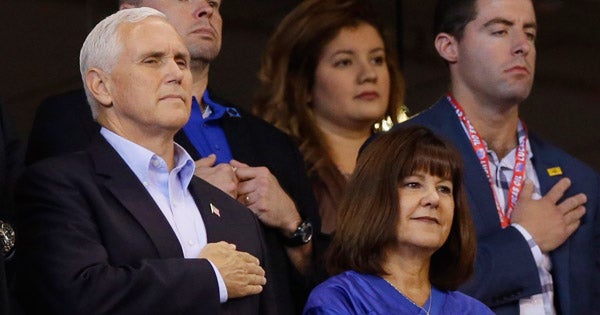 Why do they have the unopposed opportunity to disrespect the flag, to disrespect the anthem, to disrespect the military, and to attack their own business? Why is any push-back considered a violation of their rights? It’s because they are authoritarians. They believe there should not be any opposition to them ever on anything. They aren’t prepared for it and they are intolerant of it. So they squeal like stuck pigs, and they start talking about things they can’t possibly understand. Here. Grab sound bites 9 and 10. What we have here first is a media montage of the media saying the Pence walkout was a stunt.

RON CLAIBORNE: (outdoor noise) How much in taxpayer money was wasted on this stunt?

ANA CABRERA: Was this all just a political stunt?

JENNIFER RUBIN: Of course it was a political stunt.

VAN JONES: You’ve got now the president, the vice president pulling off a stunt to oppose a stunt protesting a protest.

ALISYN CAMEROTA: This was a quarter million dollar publicity stunt?

RICHARD LUI: What the vice president did here, was this a stunt?

JOE WATKINS: …sending the vice president to the game was a preplanned stunt.

But what they’re doing is not a stunt, you see. Any response to it is a stunt. You’re not allowed to respond to it. When they put a bakery out of business or a photo shop out of business, that’s not a stunt. That is justice as far as they’re concerned. If you defend the bakery or the photo shop, you also are a Christian bigot. Now, here is the player, 49ers player Eric Reid, who joined Pooperdink — Kaepernick when he first publicly took the knee as a member of the San Francisco 49ers. This is yesterday afternoon in Indianapolis at Lucas Oil Stadium, and this is what he said of the vice president.

REID: This looks like a PR stunt to me. He knew, um, our team has had the most players protest. He knew that we were probably going to do it again. And so this is what systemic oppression looks like. A man with power comes to the game, tweets a couple of things out and leaves the game with an attempt to – to thwart our efforts.

RUSH: See? In the first place it’s a publicity stunt, then it’s systematic oppression. He thinks that’s oppression? The vice president tweeting and leaving? That’s oppression? A man with power comes to the game, tweets a couple things out and leaves the game with an attempt to thwart our effort? You see, you dare not try to thwart their efforts. You dare not try to persuade anybody their efforts are not correct, right or what have you. That is systemic oppression.

That’s not oppression. Oppression? Are you kidding me? Did it stop you from doing what you wanted to do? No. It highlighted what you’re doing as foolish. It’s what push-back looks like, folks. That’s it.