RUSH: So we have the Bloomberg story — Fewest Jobless Claims Since 1973 Show Firm U.S. Job Market — and here is a companion story: “NBC Amazed by Stock Surge Despite ‘Chaos in Washington.'” Hey, NBC, you’re not supposed to be “amazed” by it. You’re just supposed to report it. Ah, but they can’t do that, because they are invested in it because NBC is helping to create the chaos. NBC is part of the cabal trying to undermine any of the good that might come out of the Trump administration.

“While covering the stock market milestone of the Dow surging past 23,000 on Tuesday, the cast of Wednesday’s NBC Today seemed surprised that the economy could be doing so well despite all the ‘chaos in Washington’ being created by President Trump. ‘What’s driving it?’ co-host Matt Lauer wondered at the top of the segment…” Who’s driving the stock market race? Did he ever ask this question when it was going up under Obama? I mean, back then they’re praising Obama for this. They’re praising the Federal Reserve.

They’re praising anybody and everybody they could find in government in order to credit the stock market going up. But now that it is continuing to go up and reaching records, it can’t be the government because they aren’t in charge of it now, Trump is. So it can’t be that. So who’s driving it? Of course, it can’t be the American people because you people are a bunch of dunderhead idiots. So they can’t figure out, with all the chaos they have created in Washington… They’re trying to create chaos in your life, but you are probably doing a good job of withstanding it.

They can’t figure out how anything is functioning given the chaos they’ve created. They’re not saying they created the chaos; I am. Let’s see. NBC infobabe Stephanie Ruhle, who used to work at CNBC, also said, “Listen, it’s a big positive. The economy is humming along. It’s about corporate earnings. Corporate America is doing well. Interest rates are low. President Trump has a pro-business agenda.” Matt Lauer couldn’t think of that, and nobody else in “the cast,” as they say, of the Today show could.

RUSH: Okay. So the economy’s doing well. I’m not gonna say it’s roaring. You know, the economy’s geographical. There are parts that are doing well. There are parts that are not doing well. When some parts of the economy are booming, by definition, some are gonna hurt. Oil price, for example. It’s an old example. Oil prices fall and it’s great for consumers, bad for the producers. So good economic news for the consumer. That’s generally what we want. Washington’s not crazy about that. Washington looks for other definitions. The establishment, the swamp looks for other definitions. So NBC is sitting here, and they don’t understand this.

Folks, put yourselves in their shoes. For a year, they’ve had Donald Trump in the crosshairs. For a year, they have launched everything they’ve got — and in their minds, they think they’re succeeding. Even though Trump’s still there, they think they’re winning. They look at Trump’s approval numbers in the thirties and forties, and they think it’s working ’cause that’s how they judge everything is polling data. They believe their own polls, which told them that Hillary was gonna win in a landslide. So they believe all these things. They believe they’re succeeding. They create these narratives that Trump’s deranged, insane, lunatic, losing his mind.

RUSH: They believe all this stuff, and for a year, they think they have been destroying Trump, and the economy doing well in the chaos that they’ve created just doesn’t compute. Which renders them speechless or asking themselves questions.

“Gee, what’s causing this?” asks Matt Lauer and Savannah Guthrie with her question about the economy. “[D]oes it mean the economy likes President Trump?” (chuckling) So all these inanimate things that are literally… You know who makes the economy is the people who make this country work — and they’re not, for the most part, inside the Beltway. Now, is line…? Is Ed in Canton ready to go or no, you’ve moved the green line to somewhere else. So let’s go — okay. Well, let me go to Ed in Canton since it works with what I’m talking about. Ed, great to have you. I’m glad you called, sir. Welcome to EIB Network.

CALLER: Hey, Rush. It’s a true honor to speak with you.

CALLER: Oh, yes, sir. Hey, I just wanted to touch base. I’m in sales, and I work here in the Rust Belt in Ohio. I’m on the ground virtually every day, cover a lot of miles, and I commented to my wife a week or two ago that there’s just an unbelievable amount of help-wanted signs everywhere. Factories, milk-processing plants, gas stations. I don’t care where it is, everywhere you look — and I keep hearing stories of people looking to hire, and they can’t find enough people. This is blue-collar country. This is agriculture, this is steel mills, this is pipelines going through — and you’re seeing a huge upsurge, and we can’t find enough people to work. It’s crazy.

RUSH: You know what? You have just stumbled into something that is a relevant aspect of this economic activity that’s taking place out. You mentioned pipelines; you mentioned steel mills. By the way, that’s anecdotal evidence. He’s in sales, he’s driving around, he’s seeing all these help-wanted signs in Ohio. These are the kind of signs that were ignored during the campaign. Signs that there was a lot of support for Trump, they were ignored.

And they’re gonna be ignored here because this goes against what ought to be happening, and what ought to be happening is what’s treated as is happening. Why do you think…? What do you think the…? If you had to pick one thing, what is it that is driving economic activity? I’d maintain to you that so much of our current economic power is due to the fact that we are no longer paying through the nose for energy. Look at the gasoline price and how it has plunged. Despite the Democrats and Obama’s best efforts by advocating for climate change.

When all of the costs of these things decline significantly, it adds up to more disposable income for people, and then it reduces the cost of things. When transportation costs are reduced because energy costs are reduced. This is called trickle-down, by the way, folks. This is how trickle-down works. When energy costs less overall, it costs less for everybody who uses it, which means you get more out of it. I think there are probably a lot of other reasons, factors here, too, but it’s I think one of the primary drivers. And how many of you…? 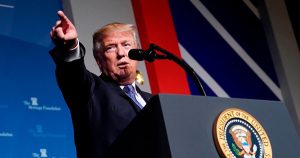 I asked you a moment ago, those of you who are old enough, “What kind of car were driving in ’73?” If you remembered, do you also remember the long lines at gas stations? Do you remember the panic every time your gas gauge went below 50% or half? Do you remember what a cost it was? I mean, in the late sixties, gasoline wars started at 25¢ a gallon. By 1973, they were up to 75¢. That percentage increase — a threefold increase in the cost of a gallon of gas — had more to do with changing lifestyles than anything else at the time.

And then OPEC came along and contrived this shortage so that the supply was limited, raising the price and panic. Jimmy Carter came along and said, “Well, you know, we got this energy crisis. You need to start wearing sweaters, keep the thermostat at 68,” and so forth, general malaise. If you remember what kind of car you were driving in ’73, you remember that. Now, look at the contrast. Energy prices. We’ve got more people using energy than we’ve ever had, certainly more than we had in 1973. What were we told in 1973?

“We have reached that moment where we have a finite amount of fossil fuel. We have only enough fossil fuel — raw crude oil — to last us X-number of years.” Panic set in. Now here we are something like 45 years later, and we have abundance in oil, in crude because of new technology to extract it. We are swimming in natural gas. We have more cheap energy than anybody — any expert — ever predicted back in those days in 1973, and it matters to overall economic activity and people’s attitudes about the economy.

So I’m telling you: In this atmosphere, in this market, if you tack on tax cuts to this and add even more disposable income to people — and if the Republicans are seen as getting credit for this — then the Democrats are buried. And they can keep trying to create all the chaos they want in the Drive-By Media, it isn’t gonna matter. Two more quick stories before the break. This one relates. TheHill.com, political Morning Consult poll. I’ve been citing Morning Consult a lot lately, and one of the reasons why is that they’re fairly accurate.

“Almost Half Think Media Fabricate Trump Reports — Nearly half of voters surveyed in a new poll think the media make up stories about President Trump and his administration.” The actual number is 46% think the media “fabricate” reports about Trump — and not just Trump, the whole administration. Thirty-seven percent do not think so, and 17% don’t know yet. They’re still trying to figure it out. Let’s add the 17% to the 46% because the 17% are not disagreeing. They’re saying they haven’t figured out.

That would put it at 63% of the American people either think the media is making it up or haven’t figured it out yet. Seventy-six percent of Republicans think so. Twenty percent of Democrats believe the media is making up stories but they still support it. Hee-hee-hee. Most of them on the Upper West Side. And 65% of Democrats disagree. “A majority of voters, 51%, disagree that the government should have the power to take away broadcast licenses.”

This is one of these things that the left is never gonna get. So Trump says in a tweet or whatever that he thinks these licenses for these networks ought to be rescinded. Now, I’m here to tell you that Donald Trump is not an idiot, and he knows nothing like that is ever going to happen. This is called he’s got a pile of excrement there and he wants to stir it up. So he throws that tweet out there just stirring it up, ’cause he can play these people; he knows how they’re gonna react to it. They take him literally, because they believe he’s an idiot and doesn’t know anything.

And then they launch with these stories: “Trump is an idiot! Trump doesn’t even know that networks aren’t licensed! This man is unfit: 25th Amendment,” which is what they’re off to now. The Drive-Bys had a meltdown over that (laughing), that Trump wanted to take away their license. They still don’t know when he’s tweaking them.