RUSH: Tom in Fayetteville, Arkansas. Welcome, sir. Great to have you here.

CALLER: Thank you, Rush. I wanted to talk to you about the way the media is weaponized against Trump. The story about the football league and how they’ve reacted? Trump was winning with his narrative about it was unpatriotic; it wasn’t the time to do it when the national anthem was played. So they had to figure out a way to make him look disrespectful, and that’s what this whole thing about this woman reporter was. “Did you call all those war heroes that were killed and talk to their widows?” I think this was set up. I’m not no (sic) conspiracy buff, but when you have a congresswoman who just happens to be in the car listening and that makes a narrative out of it —

RUSH: Let me interrupt you here, Tom, ’cause I wondered the same thing myself. I wonder back when a grandfather and grandmother were driving along looking for Christmas presents for their grandkids, and they had a cell phone-monitoring radio in their Cadillac back in the late nineties. They were able to monitor the cell phones of Newt Gingrich. You know, just practicing citizenship here. Like everybody has a cell phone scanner in their Cadillac, and what they heard, they heard Newt talking to John Boehner about strategy.

They said, “Wow, we’re — we’re — we’re witnessing real democracy, here!” So they sent it off to the New York Times, and the New York Times reported on it. First of all, when I saw that the congresswoman was in the car and all this, you know, the first thing I think when these people are involved is setup. Your point, if I understand it, is, “Look at what the players are being accused of. They’re being accused of being anti-military, so what do they do? Try to turn it around so looks like Trump is anti-military and doesn’t care.” Is that your point?

CALLER: Yes, it is. Because he’s very strong with the military, and they know it, and they’re trying to weaken him in this point by saying he disrespected this dead soldier’s widow.

RUSH: Yeah. (sigh) From everything I’ve seen, it look like that congresswoman has modified her story a little. “Well, I didn’t hear the whole conversation,” because there have been steadfast denials coming out of the White House on this. But, you know, experience guided by intelligence and vice-versa. I mean, this is what people on the left do. They try to set things up and all that — and if anybody gets in cahoots anti-military, it’s those people.

RUSH: Okay. Here’s the latest on this kerfuffle with the Trump phone call. “Trump Says Congresswoman ‘Fabricated’ Comments to Widow of Sgt. La David Johnson — President Donald Trump said Wednesday morning on Twitter that he never told the widow of U.S. Army Sgt. La David Johnson that the soldier ‘knew what he signed up for … but when it happens, it hurts anyway.’ ‘Democrat Congresswoman totally fabricated what I said to the wife of a soldier who died in action (and I have proof),’ the tweet said. ‘Sad!'” 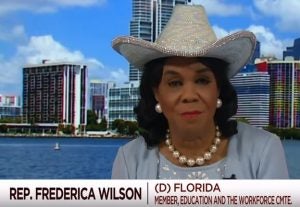 Now, we’re talking about U.S. representative Frederica Wilson, Democrat. She “told reporters that Trump made the ‘insensitive’ remark while speaking to Johnson’s widow during a telephone conversation. Wilson fired back at Trump, telling CNN that she had proof, too. ‘This man is a sick man,’ she said. ‘He’s cold-hearted and he feels no pity or sympathy for anyone.’ … The conversation between Trump and Myeisha Johnson took place Tuesday, before the soldier’s body arrived at Miami International Airport.

“‘When she actually hung up the phone, she looked at me and said, “He didn’t even know his name,”‘ Wilson said. ‘Now that’s the worst part.'” Now, I’m sorry, folks, I just don’t believe that. I don’t believe when they set these calls up for the president to make that he doesn’t have the name of the killed-in-action hero and the family right in front of him. I just don’t believe this. That would have been written out. That would have put before the president before any such call.

By the way, this congresswoman, this Wilson, she didn’t even know the name of the woman she claims to be so close to. She kept mispronouncing the name. In her tweet where she claimed Trump didn’t know the widow’s name, she called her “My-ash-uh,” where it’s actually Myeisha. Trump affirmed his position when speaking with reporters later on Wednesday.” There’s a companion story here: “Florida Dem Who Criticized Trump for Disrespecting Soldier’s Widow Has Terrible Record of Helping Vets —

“It turns out the Florida Democrat who criticized President Trump this week for making insensitive remarks toward the widow of a fallen U.S. soldier doesn’t exactly have a great track record herself when it comes to helping veterans. Congresswoman Frederica Wilson has repeatedly voted against bills that help veterans and their families, according to VoteSmart.org.” Now, if somebody on the Republican side similarly adorned with a sequin-encrusted cowboy hat and matching flower had started making up drivel about Obama, the left would have had a meltdown over that.

Had anybody — cowboy hat or not, sequin encrusted or not, flower in it or not. If they had started making up stuff about Obama, the media, the left would have had a meltdown and set out to destroy that person. But now that the congresswoman’s a Democrat, who’s no friend of the military anyway? But it’s all part of this ongoing effort to try to tell you, to convince you that Trump is so coarse, he’s just such a pig, he’s so insensitive, he doesn’t care about people — and I think our caller had a good point. What are these NFL protests all about?

Showing disrespect to the flag and the anthem, and so here’s a bit of a reversal to try to say, “Hey, look, you know, Trump’s a big hypocrite. Here he is standing up for the flag and the anthem and making a big deal about these players, and he doesn’t even respect individual soldiers who are dead, who die in action!” By the way, this is one of the soldiers killed in action in Niger, and he was there because of Obama. Lest anybody think this is a Trump deployment about which Trump doesn’t care, this was an Obama mission.