Flake Wasn’t on a Kamikaze Mission, He Miscalculated

RUSH: This Chris Cillizza story. I’m just gonna reference this one more. I referenced it earlier and I had to speed it up to get finished with it during the break.

“Jeff Flake Just Flew a Kamikaze Mission at Donald Trump.” This is Chris Cillizza. As I say, we like Cillizza. He’s a nice guy. He doesn’t know anything other than what the Drive-Bys say. Everything else is like foreign language, foreign country. So in his world, Jeff Flake standing up and taking on Donald Trump, knowing full well that his political career will end, is an act of bravery and courage unparalleled. 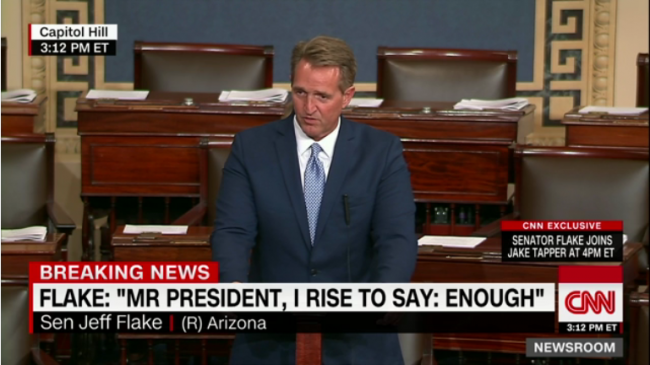 Jeff Flake thought he was going to become a national figure, a national hero because he was willing to stand up and say what needed to be said in order to save this country from this reprobate pig, Donald Trump. He thought, Chris, that he was gonna become, for lack of a better term, a big star. He thought he was going to gain national acclaim and be the toast of Washington, when the truth is he’s not even polling 18% in his reelection campaign, and he is an incumbent in Arizona.

His big effort at becoming a national star deeply courageous and brave for daring to take on the tyrant Trump has blown up in his face. Cillizza writes about it as Jeff Flake falling on his sword for the good of us all. What crap. That’s what you all want to see this as and that’s maybe what Flake thought he was doing. He was gonna be a martyr. He was gonna give up his career to save America. And instead what happens, he can’t even get 18% as an incumbent in his election bid in Arizona.