Halperin to Save Best Sexual Harassment Stories for the Book

RUSH: What do you mean, did I see the news about Mark Halperin’s sexual harassments? Of course, I saw that! It’s not like we’re gonna learn anything about it. He’s saving it all for his book. Isn’t that what he does? (interruption) Well, he writes all these columns about presidential campaigns and doesn’t tell us anything about it ’til after it’s all over, and the details that really matter are in the book.

RUSH: Five women have accused the journalist and political director for numerous TV networks, Mark Halperin, of sexual harassment. He’s also the author of a book called Game Change. Halperin and his buddy, he has a buddy named John Heilemann, and they have perfected a formula. They assign themselves the Democrat campaign for president every four years, and they cover that campaign every day, but they don’t report on that campaign every day.

They save most of it for a book that they publish after the election. And much of what they uncover would have been damaging to the Democrat, and they withhold it. And now it’s become a formula that other journalists have copied and use. Anyway, Halperin has been the political director at ABC News. He was a commentator at NBC and also on PMSNBC. He has been dismissed on the basis of these allegations.

Some of the allegations are that he would rub up against women while at ABC with a — let’s just say he was aroused, and he would rub up against them and make contact with the upper torso against their will. I’m trying to keep this family oriented. Snerdley is frowning. “What do you mean, upper torso?” Believe me, the little boys know what I’m talking about. I’m trying to protect the moms here from not knowing what their boys already do. 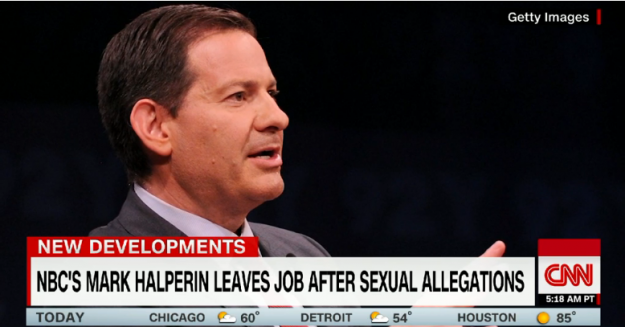 “Veteran journalist Mark Halperin sexually harassed women while he was in a powerful –” have you noticed, folks, all of these Democrats that do this? Oh, I know, you got a couple of shining examples on the right. But, for crying out loud, look at all of the sexual harassment going on in Hollywood. There’s not a conservative among ’em! You talk about hypocrisy. These are the people that preach to everybody about proper treatment and respect for women while casting them as sluts and whores.

I mean, they preach to everybody. They say they’re great feminists and they’re pro-abortion and they’re big-time supporters of Planned Parenthood. Look at this. Look at the way they treat women. Look at the way they see women. It seems like every day a new round of Democrat-leaning people are outed, led by Harvey Weinstein. I mean, to me, that is one of the most noteworthy things about it, because these are the people that preach.

These are the people that talk about how holier-than-thou they are. They are journalists, and they comment on everybody else’s moral failings as though they have never had any. Anyway, “MSNBC, where Halperin makes frequent appearances on ‘Morning Joe,’ said early Thursday that Halperin would leave his roles at that network and as an analyst at NBC News. ‘We find the story and the allegations very troubling,’ MSNBC said in a statement. ‘Mark Halperin is leaving his role as a contributor until the questions around his past conduct are fully understood.'” Halperin apologized, but the second page didn’t print. The wording of his apology was interesting. I’ll find it.

RUSH: One thing I remember about Mark Halperin. Mark Halperin was one of the biggest moral critics of Donald Trump about that Access Hollywood tape. He was just out there excoriating Trump for this kind of outrageously immature, boorish behavior. These guys gotta be careful. You start ragging on somebody like this and you’ve got your own stuff going on in your past, you’ve got to know, you have to plan on it coming out at some point.

RUSH: Back to Mark Halperin. Mark Halperin admitted to CNN that his “behavior was inappropriate.” He denied the allegations that he had “grabbed a woman’s breasts without consent,” and he “denied that he had pressed his fully clothed, erect [self] against three of his coworkers.” He denied that, but he said, “During this period, I did pursue relationships with women that I worked with, including some junior to me. I now understand from these accounts that my behavior was inappropriate and caused others pain.

“For that, I am deeply sorry and I apologize. Under the circumstances, I’m going to take a step back from my day-to-day work while I properly deal with this situation.” Well, he knew last year enough to rip Trump to shreds over the Access Hollywood video, but he only now realizes that his behavior was inappropriate? What was inappropriate about it if he was “pursuing relationships”? But this business (summarized), “I now understand that what I did was horribly, terribly wrong. It was inappropriate, and it caused others pain. I’m deeply sorry, and I apologize.” I don’t know.