Trump Is Dismantling Big Government — and the Media Hates It

RUSH: There is a story here from our old buddy Ben Shapiro, his website The Daily Wire. Headline: “Trump Promised to Cut Job-Killing Regulations, and so Far He’s Outpacing Reagan.” The story is actually written by James Barrett. “On the campaign trail, Donald Trump made a lot of promises, and while some of them, like the Big, Beautiful Wall, have thus far proven elusive, he’s managed to keep several that aren’t getting much airtime in the unprecedentedly negative coverage of him. One thing he’s doing quite well at following through on is his promise to get the government out of the way of businesses.

“In fact, he’s doing it better than any president going back to Jimmy Carter — and, yes, that includes Ronald Reagan. Peter Boyer…” We know Peter Boyer. Peter Boyer did a profile on me back when Vanity Fair was worth reading. (interruption) No, no, no, no, no. That’s Steve Roberts. Steve Roberts is the husband of Cokie Roberts of ABC News.

Peter Boyer was a writer for Vanity Fair, and they assigned him to do a profile of me. And he said, “You know, when this is over you’re gonna start getting invitations to parties at the Hamptons.” I said, “No way. I don’t care what you write, it isn’t ever gonna happen.” He said, “You watch. You watch.” And I think I got two.

“Peter Boyer at The Weekly Standard provides an analysis of just how well Trump is doing on slashing ‘job-killing red tape all across our economy,’ as Trump put it in a speech a few weeks ago. ‘We have stopped or eliminated more regulations in the last eight months than any president has done during an entire term.'” It’s kind of like Rush Limbaugh who says more in one show than most guys say in a year. That’s how I’m cutting regulations. “It’s not even close,” Trump said. 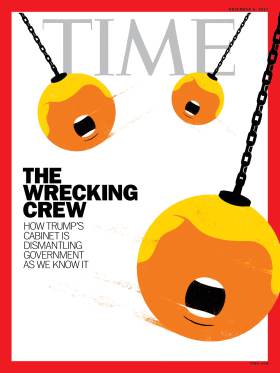 Well, you want some evidence of this? I have here the latest TIME magazine cover, and I want to show those of you watching on the Dittocam the latest TIME magazine cover. If you could switch to that, Brian, there it is. It is a series of three wrecking balls. And each wrecking ball is the face of Donald Trump with the orange hair. Actually, the yellow hair and the orange face. And the headline is, “The Wrecking Crew,” and the subhead, “How Trump’s cabinet is dismantling government as we know it.” And that’s the latest cover if you’re watching on the Dittocam, that is it. Thereby saving you the trouble of buying the magazine or looking it up on your own.

But if TIME magazine — you know, this is obviously very alarming to them, to make a cover story out of this, “The wrecking crew: Trump’s cabinet is dismantling government as we know it.” And I think there’s so many things happening in the Trump administration that aren’t being covered. I find it a little curious that the media isn’t focusing on this, from this point of view.

The media loves government. The establishment loves government. Government is the citadel around which all of them work and are organized. So government is innately good, and it must constantly grow. There must never be any limits on it. And Trump is wreaking havoc all through the government: judicial nominations, economic policy, executive orders, the regulations that he has canceled and prevented from being implemented just at the EPA alone have the left nearly bat crazy.