RUSH: Senator John McCain will not say whether he knew he was handing a Clinton-funded Russia dossier to the FBI. So McCain’s trying to say (imitating McCain), “I didn’t know who paid for it. I thought it was real. ‘Cause Trump’s a reprobate. Everybody knows it. Urinating on beds? Yeah, I can buy it. So, yeah, I passed it on.”

Greetings, my friends (laughing) welcome back. Great to have you. Rush Limbaugh, having more fun than a human being should be allowed to have. Your phone calls are coming up. I’m greatly appreciative, all of you who try to call each day and those of you who get through and stay on hold. We’ll get to you el quicko. 800-282-2882 if you want to be on the program.

McCain heard about it and he’s got an unrelenting hatred, a personal hatred for Trump. So he heard about this. You know the story. He was so excited to get it, he sent somebody overseas. He dispatched somebody on an airline: Go over there and get this damn thing and bring it back to me. And he did. And he gave it to Comey. But it was already widely known by everybody involved.

Now, the question that he’s being asked, “Did you know that this was effectively made up and paid for by Hillary Clinton?” And McCain will not say. In fact, last week McCain denied providing the dossier to BuzzFeed, said he only gave it to the FBI. “I gave it to no one except to the director of the FBI. I don’t know why you’re digging this up now,” McCain told The Daily Caller. I hope he’s asked about this every day. I hope he’s asked, “What did you know and when did you know it?”

He denied being the guy that gave it to BuzzFeed. The Clinton campaign got this thing to everybody. It was floating all over Washington. All the news agencies had it. Why’s everybody trying to act now like they didn’t know it was there. It was everywhere. In fact, one of my theories has been echoed or validated by Mollie Hemingway at The Federalist. Yesterday she did a whole timeline on how the fact that it was shown to Trump is what literally made it news and allowed all the news agencies to report it, and that was courtesy of Mr. Comey. I’ve made this point on prior occasions. She puts it on paper at The Federalist and walks through a timeline for this. 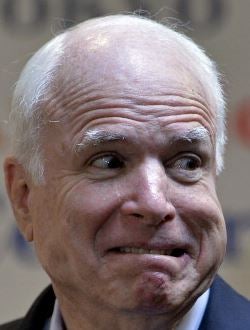 But essentially the Drive-Bys knew it’s out there. They’re salivating to use it, but there’s nothing in it that’s true. But that’s not what’s stopping them. They’re gonna use it. They’re just waiting for something to trigger that makes it newsworthy to cover it. They can’t cover the specifics because nobody really believes it. But the Drive-Bys who saw it knew how damaging they could all make it if it could just get out there. That’s why BuzzFeed decided to take the header for everybody and publish the thing. BuzzFeed took the arrow.

I am convinced that BuzzFeed was assured — and I don’t mean maybe directly by voice or phone message or instant message, but I’m sure the people at BuzzFeed were told, “Don’t worry. We’ll cover for you. We will not write how irresponsible you’ve been. We’ll cover for you on the journalism side.” And so BuzzFeed went into gear. And after months and months of this thing floating around, BuzzFeed published it. This is long after Comey’s had it, long after McCain gave it to Comey, long after it has shown up with John Brennan.

It’s already being used, probably to secure FISA warrants. Probably to gin up phony investigations of completely innocent people in furtherance of this objective to get rid of Trump. They all know what’s in it, and it’s like the Access Hollywood video: They want it out there. They think it will destroy Trump. The golden showers part of. If they could just get it out there that he hired some prostitutes to urinate on Obama’s bed in Moscow. The golden showers aspect. But nobody will touch it because none of it’s been corroborated.

BuzzFeed took the plunge. They published the whole thing on their website with caveats galore. None of this has been verified. None of this has been confirmed. We’re working diligently try to confirm it. So far we can’t, but it’s so important, we think you have to right to know it’s out there. And, bang, there it is. That made it news, and then Comey showing it to Trump. That triggered it being covered. And that’s how you and I, me, everybody learned about it.

The whole thing’s a scam and everybody on the left is in on this. And now it’s laughable today to listen to Clapper and Erin Burnett try to say the Republicans started this? The Republicans paid for it and handed it off to Fusion GPS and the Democrats? And Devin Nunes is now adamant that he’s gonna find out if this thing has been used to secure FISA warrants or otherwise begin counterintelligence investigations of otherwise innocent Americans.