“Flirty Business” Could Come Back to Bite Geraldo

RUSH: Geraldo Rivera wanted to get in on the action here on the Matt Lauer story. Greetings, my friends, welcome back, Rush Limbaugh and the EIB Network. Limbaugh Institute for Advanced Conservative Studies. Telephone number, 800-282-2882.

So when the news broke that Matt Lauer had been fired for the reasons that he was fired, Geraldo tweeted or somehow said in the public domain that this sounded a bit extreme to him because the news business is “flirty.” He said the sexual harassment issue “is so red hot right now there is no room for any thought or opinion but hang em high. If news wasn’t a flirty biz then how do we explain so many newsroom courtships that have led to happy marriages?” 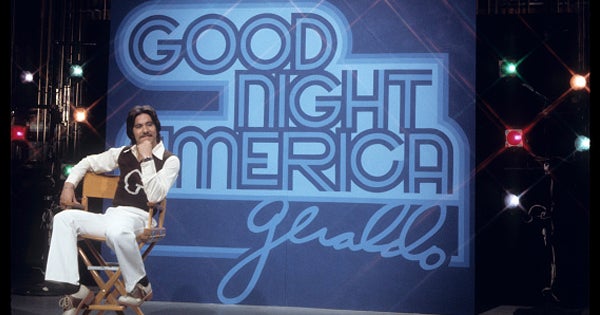 And he alluded to the fact that much of what goes on in newsrooms isn’t sexual harassment; it’s just normal flirtiness and seduction and courtship. He said there’s a slight chance that those making allegations were motivated by big money settlements, but he didn’t think that that was what was driving it.

Well, there was a predicted outcry on social media and Geraldo apologized hours later saying he “didn’t sufficiently explain that this is a horrendous problem, long hidden, and harassers are deviants who deserve what is coming to them.” He didn’t say that at first. He didn’t call them deviants. He didn’t even call ’em harassers, and he did not say that this is a horrendous problem. He said this is overblown. I mean, the news business is a flirty business.

Geraldo may not look it, but Geraldo’s in his seventies, and so Geraldo has a different generational take on all of this stuff. Let me put it to you this way. Geraldo comes from the era and generation that wanted you to think they were banging each other left and right every night. That was how their success in the business was measured in one way, not totally. But it was considered a feather in your cap if you were constantly hanging with babes in the news biz.

It’s undergone a massive transformation now. And part of it is due to the chickification of the news. And by that I mean more and more women in executive positions as well as reporting and producer and on-air talent positions. But it certainly is not the old boys club that it used to be. And I’m talking a generation or two ago, not last year, not ten years ago.

The chickification of America is when men stop being men and acquiesce or subordinate themselves. And men do that all the time to get to first base and second base with women, and hopefully to third base and home. But the chickification of America is a specific thing, and it’s basically the emasculation of men. It is not, in my definition, women taking over industries by force, by numbers or what have you.

RUSH: Speaking of Geraldo, we’re gonna go back here, audio sound bites, 1991 a Barbara Walters special interviewing the actress-singer Bette Midler, and Barbara Walters says, “Bette, speaking of taste, what do you think of Geraldo Rivera’s autobiography in which he said that you and he had a torrid sexual affair and that you were insatiable when it came to him?”

MIDLER: I’m gonna get in trouble. It was very — it was very unpleasant.

WALTERS: Get in a little trouble.

MIDLER: Okay, get in a little trouble. Well, Geraldo and his producer came to do an interview with me in the seventies, the early seventies. And this was when he was very sort of hot. And he and his producer left the crew in the other room, they pushed me into my bathroom, they broke two poppers and pushed them under my nose and proceeded to grope me. And I didn’t have any —

MIDLER: Grope me. I did not offer myself up on the altar of Geraldo Rivera. He was unseemly. His behavior was unseemly.

But Geraldo writes that she couldn’t take her hands off of him, that Bette Midler found him insatiable, and she, on Barbara Walters — this is 1991, folks. Twenty-six years ago? I guess it just got flirty, you know, in there, in the Bette Midler dressing room.