And here’s another thing to consider. You cannot ask the black guy to step down and not the white guy. That’s Franken. It’s exactly right, Mr. Snerdley. She’s not calling on Franken to resign. She’s probably saying, “Well, he’s in the Senate; I don’t have anything to say about what happens in the Senate. I’m in the House.”

So Pelosi says Conyers gotta go and Al Franken stays even though there is a fifth accuser that has surfaced on Franken. Here is Nancy Pelosi from her press briefing just this morning. A reporter said, “A fourth woman has come out accusing Congressman Conyers, and more in your caucus are calling on him to resign. How come you haven’t called on him to resign?”

RUSH: There you have it. White woman of privilege telling hospitalized black guy to scram.

RUSH: I tell you what, John Conyers’ lawyer just made a statement. He looks like he’s from Nation of Islam, by the way. That’s not a cut. I’m just advising you on his appearance if you haven’t yet seen him. John Conyers’ attorney said that Conyers will sure as hell not be pressured by a white woman of privilege to leave the House of Representatives. Well, he didn’t say that. He said Pelosi. But we all know what they’re thinking. John Conyers’ attorney said Conyers will sure as hell not be pressured by Nancy Pelosi into resigning. Here’s Pelosi, 23 sound bite. She had one other thing to say.

PELOSI: There’s a new day. And the courage of the women coming forward is something that is making a big difference. But also the attitude in the country, which I think some of it springs from the election of Donald Trump as president.

RUSH: The attorney for John Conyers. We now have the audio. This was moments ago. He held a press conference defiantly suggesting that Conyers isn’t gonna quit. 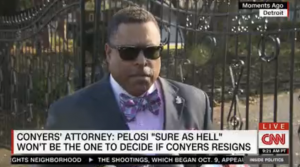 RUSH: So the attorney for the ill African-American member of Congress told a white woman of privilege to cram it. She didn’t elect him, and she’s not gonna have any say-so in whether or not he leaves Congress. And there are people saying that it really ought to be up to the voters. The voters put these people there. It ought to be up to the voters to determine what happens to them. But that’s only something suggested when the people in trouble are Democrats.

When it’s Republicans that are caught in the crosshairs, we don’t want to wait for the voters to decide. We already gonna blame the voters for sending this person there in the first place. And then the left comes forward with its deep devotion to ethics, morality, and for the good of the country, for the good of whatever else, the named Republican has to go.

RUSH: Congressman James Clyburn of the Congressional Black Caucasians is now denying that he ever said anything about Conyers shouldn’t resign because his accusers are white women. He says he didn’t say it. (interruption) What, he’s now suggesting Conyers should quit? So he’s agreeing with the white woman of privilege in the House that the black guy in the hospital should go. Man, these Democrats are tough.

I thought they cared about race. But the white woman of privilege, Pelosi, Pocahontas, whatever they say, everybody snaps to, tries to make it happen. (interruption) Oh, he found the accusers credible now? Clyburn found the accusers — wow.