RUSH: So I get a note the other day from my old buddy Cindy Adams at the New York Post. (interruption) I knew that would get Snerdley’s attention. If you’re a New Yorker, the name Cindy Adams makes you perk up for any number of reasons. I first met Cindy Adams shortly after arriving. It was one night at dinner at Patsy’s, and she had her husband with her who did not like me and half the night did not remember who I was. But kept cracking jokes about things, and she kept pooh-poohing. 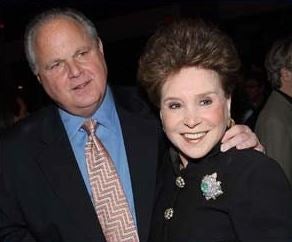 “Just shut up, Joey. Just shut up,” and Joey’d go back to the rigatoni, and she was trying to learn who I am. Joey and the gang at Patsy’s had set it up, and one of the most famous nights I ever had with Cindy Adams was she invited me to be her guest at a private HBO screening of some television movie. I don’t even remember what it was. But it was everybody in the HBO liberal establishment that showed up, and she wanted to walk in with me — and they could not believe it. It was so much fun. I saw Joy Behar, who I hadn’t seen in 20 years, and I went up and gave her a hug, and she reacted like I was Matt Lauer, and she turned around.

“Get your hands off of me,” and she turned around and saw me. “What are you doing here? Why are you here? How did he get in here?” She’s looking around. It was like a foreign invader had gotten into their party. I remember I walked up to Bob Balaban, who had something to do with producing the movie. He produced one of my all-time favorite movies called Gosford Park, and I walked up to him and I started complimenting him on Gosford Park and all he could do was stare at me like (laughing), “What is he doing here? And why does he like what I did?”

During the screening of this movie, Cindy Adams and I are seated right in front of Susan Sarandon, who leans forward during the movie and says to Cindy, “Cindy, do you realize what a photo-op you’ve put together here? Nobody would believe it.” So, anyway, it was fun. We went to dinner after that. Tina Brown and Sir Harry Evans. Literally, folks, the entire New York entertainment glitterati were at this thing, and she had the guts to take me — and, of course, I had the guts to go. But they’re all looking around, “Why are you here? How did you get in?”

She’s aware that 700 animals with their parents she says will be “jamming the church,” but anybody and everybody is welcome, and she wanted to remind me of this. There will be pigs and llamas and alpacas and — as I say — some will no doubt bring gerbils, dogs, cats, birds, turtles, fish in bowls. It’s the ninth one. She does this because she’s an animal lover and she thinks the animals need to have their own worship service during the holidays. Obviously, it’s for the pet owners, but it’s also for the animals too.

In fact, the headline of her piece is about prayers for animals. So Christ Church… Can you imagine the church agreeing to this? So it’s December 3rd, just a couple days away, this weekend. It’s 60th and Park, which is, hey, folks… I mean, 60th and Park? That’s right in the heart of what you would call the elite. (chuckling) It’s one of their churches where this is gonna happen.