“Embarrassingly, Keillor’s column the day before his Wednesday firing defended Minnesota Senator Al Franken from similar sexual harassment allegations, calling it ‘pure absurdity’ to demand the senator resign.” We’re supposed to have a press conference, by the way. That’s right. Conyers was supposed to get out of his hospital bed to do a press conference right around now. But, you know, Conyers is probably saying, “Why should I do this? Everybody’s focusing on Flynn. I can just hide behind this.

“Why should I come out and do this now?” I am looking at two networks, and I don’t see even a crawl or banner headline referring to, “Waiting for momentary Conyers press conference” at all. They’re all wall-to-wall on the Flynn guilty plea. “Garrison Keillor Firing Prompts Backlash From his Fans — . Meanwhile, MPR News reported that many people were angered at Keillor’s dismissal and dozens planned to cancel their memberships.” 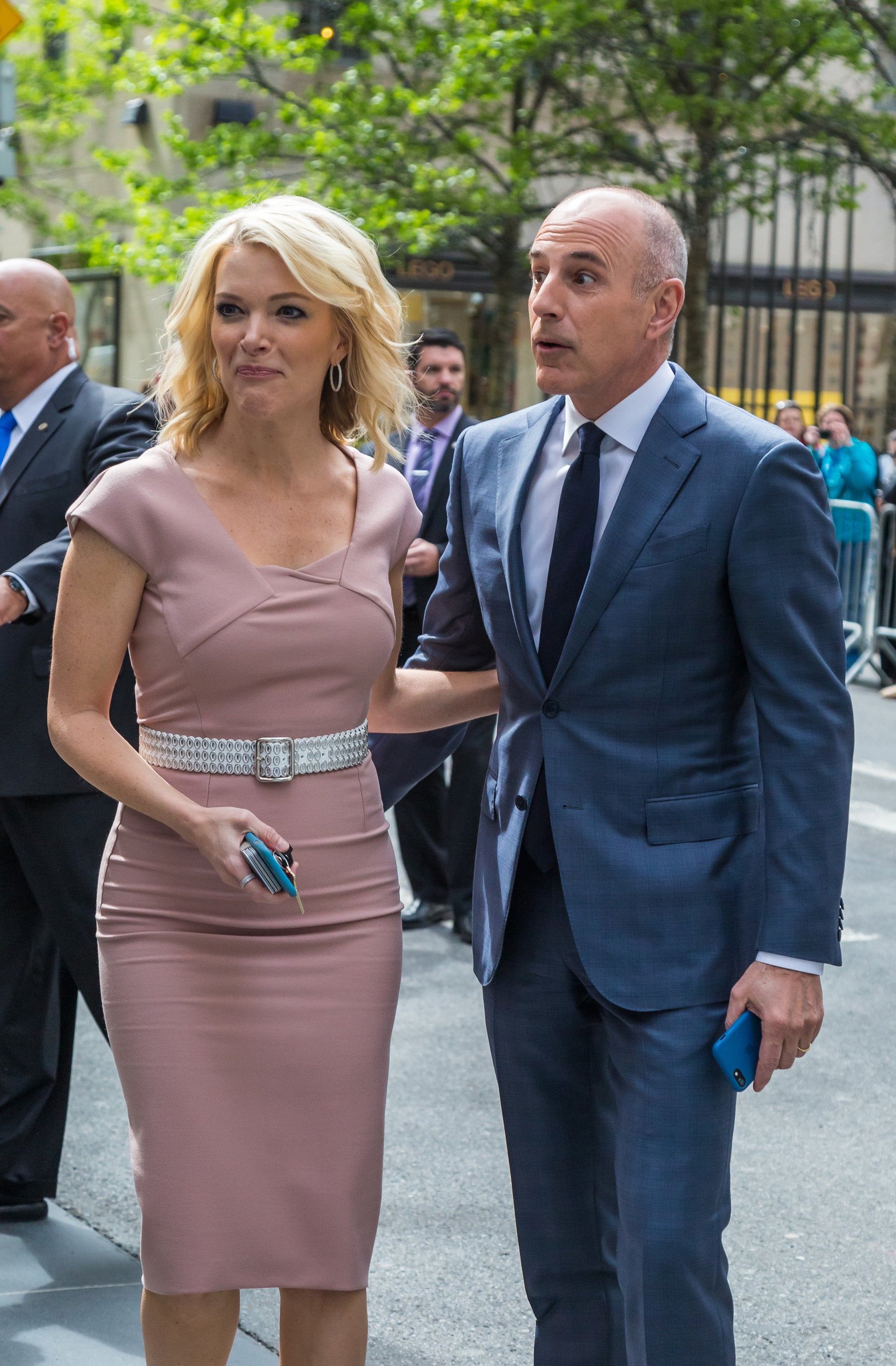 Bill O’Reilly probably had a lot of disappointed fans, too, but I don’t recall the AP shedding any tears over ’em. AP is worried about Garrison Keillor’s fans. Snerdley, what are your thoughts on Franken with all this? Will Franken survive this, do you think, or not? Will Franken eventually be forced out of this or not? (interruption) You think so? Well, in Franken’s case, there are additional women that keep surfacing.

“NBC: Matt Lauer’s Sexual Harassment Accusers Could Number ‘as Many as Eight’ Women — As the number of women claiming Matt Lauer was sexually inappropriate has grown to ‘as many as eight,’ NBC is denying that its execs knew” any of this. “NBC’s Stephanie Gosk revealed to Megyn Kelly during the 9 a.m. hour of Today that there could be up to eight accusers, as details surfaced about the star’s alleged lewd behavior and old video clips back in circulation raised eyebrows.

“‘We have reached out to New York City police; we have reached out to police departments in Long Island. We know of no open criminal investigation against Matt Lauer,’ Gosk said.” Now, Stephanie Gosk is the NBC… She is a proud lesbian. She and her wife, the former weekend today news anchor Jenna Wolfe, have two daughters. Ms. Wolfe is a woman of color. Stephanie Gosk says there’s eight more women out there ready to drop the boom on Matt Lauer.

Megyn Kelly, by the way… Have you seen the Daily Mail piece? I mean, they hate this woman at NBC. They despise her. There is a whole Daily Mail story on how the people at NBC — the Today show people on camera and off — just literally hate Megyn Kelly for the way she is trying to take advantage of this, that she’s acting like she’s a member of the NBC family and she isn’t. I’m just gonna tell you, folks, it’s a little odd. I have to tell you.

Matt Lauer is the guy who has genuinely mistreated women, and they’re not one-tenth as mad at him as they are at Megyn Kelly. All Megyn Kelly did was get hired! This is what ticked ’em off in the first place. That whole Megyn Kelly-at-NBC dynamic, it’s a classic of the insider-outsider mentality. It’s a classic of outside the establishment, inside the establishment. She was at cable. That’s bad enough. People at broadcast news think cable news is the minor leagues, if not worse, and Fox News is despised. It’s hated!

And then all of a sudden NBC hires this intruder, and this intruder has the audacity to show up and act like she belongs? (snorts) And the long knives are out for her like you can’t believe. And it’s classic insider versus outsider. It’s classic, “We’re in the clique, and you’re not,” and the fact that they now think she may be trying to maneuver things so that she gets Lauer’s job? They’re just… They’re beside themselves, and they’re talking to the Daily Mail, and they’re saying vicious things.

I thought I had the thing in front of me. I thought I’d printed it out. But apparently not. Well, I know I did. I think I just probably misplaced it here. But, I mean, you get the idea. You get the drift. It is vicious. (sigh) Some of it’s cat fight ’cause, you know, it’s girl-on-girl — I’m sorry — female criticism of another female. And the rest of it is just pure, unadulterated hatred, anger, some cases jealousy, what have you. “NBC’s Shifting Statements on Lauer Draw Scrutiny —

“Lawyers for Matt Lauer are working on landing the shamed anchor a $30 million golden” condom as opposed to “parachute following his NBC firing. Sources close to the disgraced newsman say his team is working on a plan to get him paid through the remainder of his $20 million-a-year contract — which still has a year-and-a-half to run. A source close to Lauer’s team said, ‘They are currently looking at his contract and determining whether the claims against him, which clearly would affect any moral clause in his contract and his ensuing termination, would cut off his contractual rights to be paid through to the end of his contract.'”

What leverage does the guy have? Why would they have to pay him off? What could he possibly have to say that could damage them any more than what he’s already done? If they do have a morals clause in the contract, he’s already violated that. I don’t even know where… (interruption) Well, yeah, that’s true. He could say that they knew and that all of this is not sincere just because the pressure was brought to bear. “They’ve known for years what I was doing and they sought not to do anything about it.

Now, why would he buy a place in New Zealand? (interruption) He knew? (laughing) No. I’ll tell you why. (interruption) It has nothing to do with sheep! (groans) The reason Matt Lauer — and I don’t know. I’m just speculating. Why does anybody buy a place in New Zealand? ‘Cause you think the United States is going belly up. You think they’re gonna take the money of the wealthy. You think that the United States is gonna go belly up or that it’s gonna be taken over by illegal immigrants or whatever.

New Zealand is one of those places that people who think this have been buying property for a while in case there is an emergency need to take the family and get out of America, New Zealand — and, in fact, because of this, New Zealand is really tightening down on foreigners buying property there at all. But for a while, my friends — I know this because I was pitched to join this parade. Since I don’t harbor those kinds of panicked, paranoid feelings, I of course was not the interested.

But I’m telling you, New Zealand… Singapore is another place. If you figure you’re not gonna do anything to get caned, Singapore is a good place to go. (interruption) Freedom…? (interruption) The question is been asked: “Do you think we’ll ever find out the executives knew about the push button under Matt Lauer’s desk that allowed him to lock the door?” You think they had to know about that? (interruption)

Somebody had to put it in! I guarantee you, Matt Lauer didn’t run the wires and all this. Of course they knew about it! Somebody had to know about it! You’re not gonna put a button… If Matt Lauer had tried to put that in by himself, the union guys would have run him out of the building for doing it on his own. There’s no way that he could gotten away with it without anybody knowing.

RUSH: Here’s the Daily Mail piece on Megyn Kelly. Just listen to some of this. “No One Wanted…” This is the headline: “‘No One Wanted Megyn Here! She Was Forced Upon Us and Today Reinforced Why She Will NEVER Be Part of the Today Family.’ Staff Are Outraged at ‘Smug’ Kelly and Her Insensitivity to Colleagues Over Matt Lauer Firing.” Apparently, she wasn’t appropriately tearful or shocked when Matt Lauer was let go.

“Megyn Kelly used her platform to describe Matt Lauer’s firing as a ‘sign of progress’ on Wednesday.” Even these infobabes and anchorettes at NBC supposedly knew he was doing this! Can you imagine Megyn Kelly saying, “This is a sign of progress. We got rid of another predator,” and the women at NBC are mad at her? Well, yeah, it makes total sense in certain, you know, human ways. But it doesn’t make sense logically.

I mean, the person to be mad at here if you’re gonna blow your lunch would be Matt Lauer. Next little bullet point: Megyn Kelly “said she had no ‘official knowledge’ of Lauer’s alleged misconduct but knew ‘people were sniffing around the issue.'” They’re mad at her for trying to insert herself in this story as somebody who knew who was going on when she’s a dork that didn’t know anything. “‘Megyn saw this as an opportunity to mark her territory — but she failed and has lost the support of EVERYONE at NBC,’ an NBC insider” said.

Another NBC malcontent said, “‘We now have the highest paid person at NBC News hosting one of the lowest rated shows and rather than being humble, she takes the first opportunity to take the spotlight and make it all about her.'” So? Isn’t that what every diva in TV does? It seems to me to be perfectly normal behavior. Another bullet point: “‘And here’s something we’d like to say about her — she’s terrible on morning television! Her show is terrible. Her staff think she is terrible.'” This is high school cafeteria stuff, or high school teen town stuff. But they don’t like her. They don’t like her at all. It is so patently obvious.