NFL to Purloin Money from Breast Cancer Research and Redirect It to Social Justice Cases in the ‘Hood!

RUSH: We’re gonna start in Findlay, Ohio. This is Randy. Great to have you, sir. How you doing?

CALLER: I wanted to talk mainly about the football situation.

CALLER: I was a Cleveland fan and especially a Steeler fan, and I lost interest in Browns when Isaiah Crowell posted that head of a severed head of a police officer. So I quit rooting for them at that point. But I’ve been a Steeler fan for a lot longer, and with all the garbage with people kneeling and everything? Even if they were bribed into all standing from now on, I won’t watch NFL anymore. I thought it would be a lot harder than it actually is to not watch them, but I haven’t watched a game this year except part of one on Thanksgiving when I was at someone else’s home and they had it on.

RUSH: Okay. So even if the players decided to no longer kneel, it wouldn’t bring you back?

CALLER: No. Because I know how they really feel now.

CALLER: And I wouldn’t want to waste my time.

RUSH: This is one of those things, you know, where the damage has been done. But let me bring you up to speed here on… (laughing) I love this, folks. I’ll bring you up to speed here on the latest. The latest was from yesterday where we learned… Get this! Now, we mentioned this to you. The NFL has offered somewhere between 90 and a hundred million dollars to causes in local communities that African-American NFL players care deeply about over 12 years. Ninety to a hundred million dollars over 12 years.

It’s $225,000 to this agency, $225,000 here, and it will take, I don’t know, 10 or 12 years for the payouts to happen (long beyond when any of the players today are still playing, by the way). What’s interesting about it is that the league got nothing for it! These are supposedly the smartest businessmen in the world. These are some of the craftiest negotiators in the world. They didn’t even get a promise from the players to stop kneeling!

They didn’t even make the offer to the full players union! They made the offer to a subset of players called the players initiative or some such thing, which is headed up by a guy from the 49ers and a guy from the Philadelphia Eagles, and there’s already discord in this group. Anquan Boldin is part of the group. There’s already discord in this group, and it’s only about 40 or 50 players. But the NFL is gonna go ahead with this even though they are not getting anything for it.

They are hoping that this show of solidarity and support for social justice warrior cases will, in fact, inspire the players to stop protesting and stand for the anthem. Now supposedly at next year’s owners meetings there’s going to be a revision of an NFL rule that was authored in 2009. That rule requires… Ready for this? (laughing) That rule requires all players to be on the sideline when the anthem is played, but it does not require them to stand.

I am given to understand the rule revision will eliminate the requirement the players be on the field during the anthem and allow them — and maybe require them — to stay in the locker room during the anthem. So in that way, they won’t even roll the dice. There won’t even be a chance the players could sit for the anthem or kneel ’cause they won’t on the field. What a gutless way of dealing with this! So you offer a hundred million dollars over 10 or 12 years, whatever it is, to social justice warrior causes. 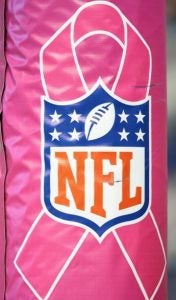 You don’t get anything for it; then you plot a rules change that keeps the players in the locker room during the anthem, so during the anthem, the players — the whole reason everybody’s there — (laughing) are not on the sideline. But, but, my friends, there is more. We have learned just now where this hundred million gonna come from! (laughing) Oh, Lordy! I love Open Line Friday. The money to pay for African-American social justice warrior causes would come from money already allocated to breast cancer awareness and salute to military service!

San Francisco 49ers safety Eric Reid said, “So it would really be no skin off the owners’ backs. They’re just gonna move the money from those programs to this one? Well, don’t do us any favors.” You might say, “Not so dumb after all.” But here they are… How do you think this is gonna sit with the NAGs and the NOW gang and everybody else (laughing) to learn that the NFL’s gonna be taking money already promised and committed to breast cancer research.

There is precedent for this in the Democrat Party, on the American left, black guys rank higher than women — particularly white women. Hillary running for president 2008, was pretty much told by the party it’s hers. It’s her turn. “We’re paying you back. We appreciate all you’ve done,” and all it took was the arrival on the scene of a young, good-looking, young, clean — according to Joe Biden — black guy. And they threw Hillary overboard as fast as they could.

They threw under the bus, over the bus, and Obama became the star of the Democrat Party, and Hillary to this day is wondering what hit her. So the Democrat Party has shown that in their hierarchy, black guys do take precedence over women — and here we’re seeing it again. We are seeing it again now with the purloining of money from existing breast cancer charities and redirecting it to social justice cases in the ‘hood.

RUSH: So Nancy Pelosi — white woman of privilege — tells the black guy, John Conyers, to quit, and the NFL says to white women of privilege, “We’re taking your breast cancer money, and we’re giving it to the African-American players for social justice warrior causes in the ‘hood.” It kind of balances itself out. I don’t know if that was intended, but it does.