RUSH: Here is Ricardo in McAllen, Texas, we head back to the phones. Hi, Ricardo. Great to have you here.

RUSH: Well, it’s great to have you, Ricardo. Glad you took the time to try to get through today.

CALLER: You bet. My pleasure. Listen, if it can be concluded that Mueller is no longer doing the Russian collusion investigation, if this is the case, then Sessions should start doing his job, as he is no longer precluded —

CALLER: — from the investigation.

RUSH: You’re thinking that Sessions should un-recuse himself.

CALLER: Okay. Well, let me give you another angle. With everything that’s been discovered and what the previous FBI director overlooked, Sessions should assign his own special investigator, then proceed on that.

RUSH: So you don’t think that this investigation should be shut down?

CALLER: Because whatever is going to come out of this investigation, Mueller has had to have looked the other way on many other things that they discovered in order to proceed against Trump. And this other special investigator is going to find that out. And that being the case, everybody, including Mueller —

CALLER: — the Clintons, Comey, are coming down.

CALLER: Exactly. Because things have come out of this that were overlooked from previous administrations, previous directors, and this needs to be resolved. This is a country of laws.

RUSH: Look, I agree with that. I don’t know how you get there. I think these investigations, the longer they go, you wear people out. The thing about an investigation is — Andy McCarthy made this point yesterday in the interview. Ken Starr blew it, because during the investigation of Clinton-Lewinsky, the Clintons controlled it because every day James Carville was out there accusing Starr of being a sex pervert and selling cigarettes to teenagers and kids while he was investigating Clinton and may even have had contact with aliens.

And, meanwhile, the Starr team is saying nothing. Well, the Mueller team’s controlling this one. The Mueller team’s doing the leaking, the Mueller team’s filing the charge against Flynn. If there’s something new that is leaked or released every day or every other day, then you can avoid the fatigue of it, because ideally an investigation nobody would know diddly-squat ’til it’s over and they announce their actions.

But that’s not what happened, ’cause this thing is purely political. An investigation of the investigation, I don’t know. But I get your point. You think that the elements of this investigation that are fraudulent need to be exposed, the American people need to be told. And I agree with you about that.

But I’m gonna tell you something, Ricardo, you and I on this know 90% more than the American people. What you and I are talking about, the American people who get their news from the Drive-By Media haven’t heard a word of any of this. They don’t know. They’re not being reported.

RUSH: Mary, Cedar Rapids, Iowa, great to have you with us. How are you doing today?

CALLER: Thank you so much for taking my call, Rush.

CALLER: Now, the first part of a my question was already asked by the prior gentleman about the un-recusion. And the second part is, can the funding of the investigation be stopped? They have already spent $7 million. And my husband’s comment was, he would like Jeff Sessions to reach into his wife’s purse, get out his gonads, and reattach themselves and get some work done.

RUSH: (laughing) Such a mild-mannered caller from Cedar Rapids, Iowa, and then blindsided by the idea that the attorney general’s balls are in his wife’s purse. Well — (laughing) — you ought to meet Al Franken. The idea of funding for this investigation, this is such a convoluted thing. We went through the history of it yesterday in my post-show interview with Andy McCarthy, which is coming up in the next issue of my newsletter, The Limbaugh Letter, and it was a good reminder of how all of this began, not just the Sessions recusal, but the fact there’s no underlying crime that’s being investigated.

It’s open-ended, the funding is open-ended, and this investigation is so tainted now that you would think the people behind it would want to do something to clean it up, including Rod Rosenstein, who’s the deputy attorney general acting for Sessions, whose testicles were in his wife’s purse after he had recused. Somebody needs to step in here and try to get this back because we know of the tainted investigators. Now with all of the anti-Trump bias and even hatred that they have for Donald Trump, there’s no way this investigation would ever be called objective now. And, of course, I think it’s bogus in the first place.

We’ve had a suggestion that we aired earlier from a former CIA analyst who says that, in his estimation, Trump should just pardon everybody and end this just because there’s no “there” there. There’s no crime. There was no collusion. Everything that’s being done is a trap. This whole thing — it really is, folks. The Trump dossier — I’m not kidding you — the Trump dossier was written to cause just this. They wrote a phony and false document that was designed to be used by coconspirators at the CIA and the Obama administration as legitimate intelligence that was earth-shattering in its consequences and needs to be pursued. 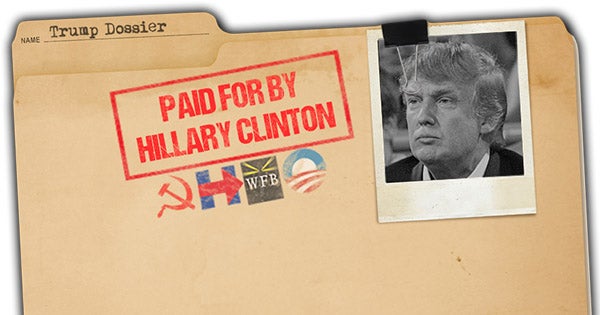 It’s all BS. There’s not a shred of truth in it. But it’s the framework and the foundation, the basis for the investigation. Comey has said so, and John Brennan, CIA, has said so. And it’s nothing more than a trap. If you pardon everybody, then the investigation is over. And if you do this with a president explaining why he’s doing it and walk people through this — The danger, of course, is public opinion.

And if Trump does this — remember, the Drive-By Media has not reported much of what I just told you. They reported some of it. But your average, ordinary news consumers do not know probably 75% of the stuff we have revealed and that we all talk about here, folks. The Drive-By Media does not report this stuff, or most of it. As such, it would be out of the blue to a lot of people that Trump’s shutting it down.

The first thought they would have is, “Ah! The investigation must be getting close, and Trump’s doing a Nixon,” and that’s the last thing that Trump wants is anybody to think Nixon revisited. But, look, something is gonna have to give here because this is bogus, and it has now been discovered. Whether the Drive-Bys are reporting it or not, they know it and everybody that’s paying attention to this knows it. This is not a legitimate investigation.

It’s not a legitimate premise. But it still has the power of the Justice Department behind it. This guy can still go to court and get indictments if he wants to impanel a grand jury. He can still lean on people to get plea agreements to avoid them going broke and having their families ruined. Even though the whole thing is a bogus trap. Sessions un-recusing himself and conducting another investigation? You know, it’s not a far-out idea. Andy, in fact, had an idea. Trump can appointed an independent counsel.

In fact, Sessions. Sessions is only recused from this stupid Russia thing. Sessions appoints — get this — an independent counsel to investigate the Iranian nuclear deal. There were pallets of cash delivered for release of hostages. Does the Iranian nuclear deal really let Iran get a nuclear weapon in 10 years? You know, or how about special counsel into some of the odd, really odd vagaries of Obamacare. The point is turn the tables on these people!

Start looking at them with the power of the DOJ that they’re looking at Trump. I think what we’re looking at here in this whole investigation as I have characterized it the last two days — and I’m not gonna start yelling about it again. But it frosts me that this whole thing is bogus on a false premise, that it’s a pure trap, that there’s no collusion, and that everything happening to people here is process crimes: Obstruction of justice or lying to investigators.

None of this should be happening because the premise of this investigation didn’t happen. There is no collusion. This investigation is, in my estimation, one of the biggest news stories in generations. This investigation and the bogus nature of it — the political nature of it, the origins of it — is waiting for a Woodward-Bernstein to come along and expose this for what it really is, because Trump is a chump player compared to what this is.

I’ll detail it when I get back from the break. I’ll tell you what I’m talking about. Don’t go away.

RUSH: Look, I don’t have time to detail this, but let me run through this real quick, ’cause to me, this is a Woodward and Bernstein story that surrounds us every day. I think it’s the biggest story in generations. I think it’s bigger than Watergate, and the Drive-Bys are sitting around ignoring it because they’re part of it. They really are — in this case — acting as opposition to the people. We have a corrupt bunch of Democrats who are attempting to overthrow a president. That is such a huge story. But they’re in on it. They’re helping.

So they’re trying to cover that up. Imagine if a real journalist wanted to do this story. We have top FBI officials working for Hillary Clinton, the campaign loser. They are abusing their powers to try to find out garbage about an incoming Republican transition team. We have James Comey, the FBI director, exonerating Hillary Clinton of all crimes before even interviewing her. We have massive leaks from every branch of the government that are all lies.

Those come from every aspect of the executive branch, the deep state. We have a guy who changed wording to a non-crime to protect Hillary, who is working on the investigative team of Trump. We have Comey — a Mueller butt-lick for years — leaking information illegally to the New York Times. That’s just half the list of things going on here. I see now by looking at the clock that I’m gonna have to finish this tomorrow. This, to me, is big. But they’re in on it!