Instant See, I Told You So! NYC Terror Attack Blamed on Trump Recognition of Jerusalem as Israel’s Capital

RUSH: I’m gonna make a prediction. I have not heard this yet. And I must confess the last 20 minutes I have been off the grid in terms of paying attention to any news. I’m just gonna predict to you by 3 o’clock today, by the end of this program today, this terrorist bombing in New York will be said to be due to the rage in the Islamic world of Trump moving the U.S. embassy in Israel to Jerusalem. That’s what I am predicting they will chalk this up to. I’m surprised it hasn’t happened — Snerdley, have you heard — has anybody — you haven’t heard it yet? Okay, good. So I want to be on record making that prediction. I’m surprised it’s taken them this long.

But, you know, one of the problems, they really don’t want to admit this is terrorism. And they don’t have much of a choice here. So they’re trying to down-sell it by talking about how the device was cheap and not very good and the guy was this or that. They can’t deny it’s a terror attack, and they’re not. But when they get their wits back up, maybe when they talk to a couple of CNN’s blind sources, they will conclude here that this terror attack was the result of Trump moving our embassy to Jerusalem in Israel.

Yeah, the terror attack itself, every time these things happen and they are inexorably tied to militant Islamists, you can see the disappointment on the faces of the Drive-Bys. They would much rather be able to report that this was part of Trump collusion with Russia or that it was part of the Trump dossier or that it had something to do with anything other than what it has to do with. You can just see they’re disappointed about this.

I watched this today. I’m sorry. I have trouble taking this seriously. It’s so predictable. There’s a formula here, okay? An event happens — it doesn’t matter where it happens — this event happened in New York. There’s a scrum, there is a press conference featuring about 20 people, one microphone, 20 people. They all share and rotate going to the microphone. I also happened to notice that this one today, it was all white guys. There wasn’t a woman, there wasn’t an African-American, and there wasn’t anybody under 70!

Cuomo, I mean, here he is, everybody’s focused attention on this, and the governor of New York is saying (imitating Cuomo), “We are a target. You know why we’re a target? Because the Statue of Liberty is in our harbor, and the statue stands for freedom. So yes, we’re gonna be targets.” This justified a press conference?

And then de Blasio went on to say, “Use this as a lesson. The best defense is if you see something, say something.” Okay, what was there to see in this attack? Are New Yorkers supposed to report every suspicious-looking Muslim man in their twenties with a beard?

What was there to see here? Because from everything I have been able to deduce, the guy was wearing the bomb underneath a jacket. Everything I’ve been able to gather, there didn’t seem to be anything else obviously suspicious about the perp today, or even the perp back in — there was another event back in November, and there wasn’t anything particularly standout about that perp.

Now, if you’re in New York, who is willing to risk being charged with a hate crime for calling attention to some innocent Muslim man? It could be a two-year sentence in political correctness prison. You know, profiling and all of that. The reports today say that today’s perp is from Bangladesh, has been in the United States for seven years, and lives in Brooklyn. That raises the question: How did he get here? I wonder if this guy’s part of the diversity visa lottery like the guy in November was. (interruption)

Well, I mean, what are you laughing about? These are legitimate, logical questions that a curious person would have. But I’m really serious. I mean, de Blasio is praising New Yorkers, “If you see something, say something.” What was there to see here? Bangladesh is where the guy’s from. If the guy’s from Bangladesh, if that holds up, the media is gonna be very, very disappointed. It would have been better if the guy were from Palestinian so they could blame the attack on Trump — and they still might, because a terrorist is a terrorist because Trump exists.

Trump is creating terrorists. He’s angering them and so forth. So whether the guy’s Bangladeshi, whether he’s Middle Eastern/Palestinian, it doesn’t really matter. It happened at rush hour. They say they’re gonna have everything back to normal by the afternoon rush hour today. So let’s just see. Let’s just see how long it takes for the Drive-By Media to blame this on Trump and his moving of our embassy from Tel Aviv to Jerusalem. 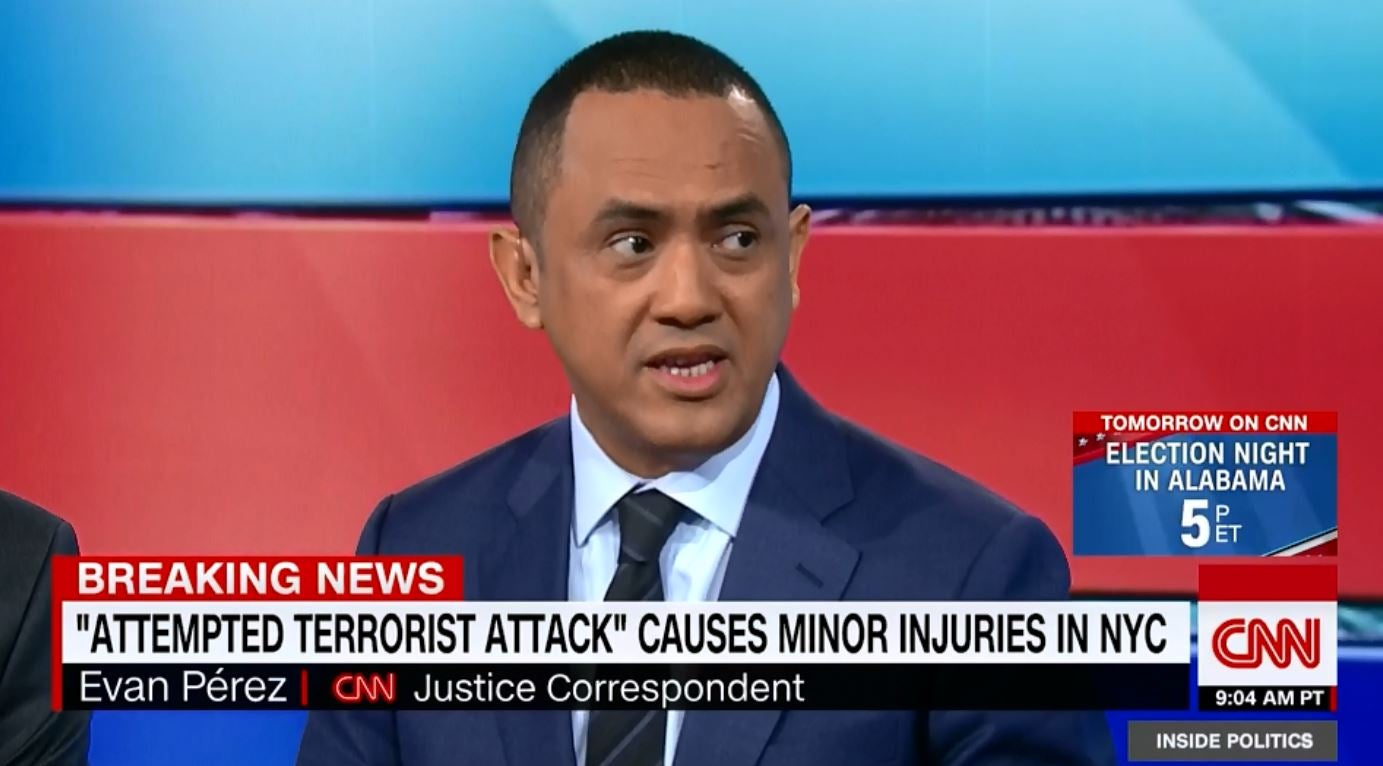 PEREZ: One of the things I — I was talking to counterterrorism officials over the weekend even [then there], uh, was this fear, uhhh, that because of the decision by the Trump administration to recognize the Israel, the capital as Jerusalem, that there would be an uptick in this type of activity. They were certainly looking for that over the weekend. They were looking to see if there was anybody who they already had in mind uhhh, might be animated to — to — to carry something out. They didn’t have that at this point.

RUSH: Weeeeeeeeell! (laughing) Do I know these people or do I know these people? So let me parse this for you. Evan Perez, CNN: “One of the things I — I was talking to counterterrorism officials over the weekend…” Even before the attack, folks, this guy just happened to be talking to counterterrorism sources over the weekend. And these counterterrorism sources told old Evan Perez that they had this fear that there might be a terrorist attack because of the Trump to recognize Jerusalem as the capital of Israel that there would be “an uptick in this type of activity.”

“Over the weekend, we’re thinking about this. We’re thinking the next terror attack might actually be because Trump moved the embassy to Jerusalem. Capital of Israel.” And, bammo! (interruption) No, no, no, don’t misunderstand. I’m not saying that somebody made the attack happen so they could say this. No, no, no. Don’t put words in my mouth. Oh, look at this! Source: “New York City Suspect Cites Israeli Actions in Gaza as Motive.” Bingo! Close the loop. The perp has now said that he did it because Trump moved the embassy to Jerusalem.

This guy is Bangladeshi. (laughing) Folks, I’m telling you.

RUSH: Before we get back to the phones, grab sound bite number… Let’s see. Da-da-da-da. Yeah, grab 3 and 4. I want you to hear Governor “Cooomo” (as pronounced by the Reverend Jackson) and Mayor de Blasio today following the terrorist attack in New York. Sound bites 3 and 4. Here’s Cuomo…

CUOMO: This is New York, and we all pitch together, and we are a savvy people, and we keep our eyes open, and that’s what, “See something, say something” is all about.

RUSH: Right. Okay. (impression) “See something, say something! New Yorkers are great at recognizing guys with bombs around their waists. New Yorkers are very savvy! It’s like they see the Statue of Liberty, and they know that it stands for freedom. You see it; you say it.” Up next was the mayor, Bill de Blasio…

DE BLASIO: This was an attempted terrorist attack. Thank God the perpetrator did not achieve his ultimate goals. The governor invoked this phrase — we can’t say it enough times — “When you see something, say something.” This is the difference maker. We see it time and again. When an everyday New Yorker sees something that doesn’t make sense, hears something, sees a package, gets a feeling that something’s wrong, don’t hold it to yourself. Tell a police officer.

RUSH: You notice these people are relieved that it was “only” a pipe bomb? These are the people that live with this “new normal.” A declining economy. Obama said, “We gotta adjust. The new normal is a declining economy, a nation in decline.” How about Governor Moonbeam? Did you hear this guy? Jerry Brown said over the weekend, “We’re just gonna have to adapt. This is the new normal. Wildfires destroying our state is the new normal because of climate change.” If you’re a California resident, how would that make you feel?

(interruption) Like moving is right. This is normal? You mean this it? There’s nothing we can do. It’s climate change? So the climate change advocates, can you imagine the dichotomy here? They’re supposed to be happy that somebody acknowledges, but then the result is all these fires? So how do you be happy about that? But how about having a governor who is so hapless that forest fires burning down your state is the new normal because of climate change? And back to de Blasio and Governor Cuomo here.

RUSH:  I love this.  Sarah Huckabee Sanders is doing the White House press briefing and said that the terror suspect in New York came to America due to chain migration.  She is one smart cookie, Sarah Huckabee Sanders.  Of course, the press is being driven bananas with that.  I mean, they want the story to be that this is an innocent young man living his life as a dutiful American in Brooklyn and then Trump decided to make Jerusalem the capital, and the guy freaked out and tried to blow up whatever, Times Square, and it didn’t happen that way.  No, obviously he’s here because of chain migration.

Meaning: We need to fix this.

He shouldn’t have been here in the first place.

The media wants to present him as a totally justified person and we should understand the rage.