RUSH: Jackie Speier, Democrat, California, had a press conference today along with Lois Frankel to demand a congressional investigation into Trump.

During the Q&A, Jackie Speier talked about the reasons behind the call for an investigation.

SPEIER: As you’re all aware, House Rule Ten gives the Congress of the United States, and particularly the House of Representatives, the authority to investigate anything at any time. And it is under that House rule that we are calling on the Government Oversight Committee to do the investigation. But what took place this morning when the president tweeted about our colleague, Senator Kirsten Gillibrand, is grotesque. It took my breath away. And it represents the conduct of a person who is ill equipped to be the president of the United States.

RUSH: Oh, come on. Nobody believes you! Except your other insane leftists. Come on. Is Kirsten Gillibrand really made up of the flimsiest balsa wood that she can’t even handle a strong gust of wind? This is what our first caller was talking about. Why do you want us to believe that Senator Kirsten Gillibrand is so helpless and so frightened and so fragile and can’t handle the president saying something about her? For crying out loud!

Here’s Trump’s tweet. Now, Gillibrand had tweeted something about Trump. I mean, he didn’t start it. She starts something, so he responds. “Lightweight Senator Kirsten Gillibrand, a total flunky for Chuck Schumer and someone who would come to my office ‘begging’ for campaign contributions not so long ago (and would do anything for them), is now in the ring fighting against Trump. Very disloyal to Bill & Crooked-USED!”

Now, let me ask you a question. And, by the way, Gillibrand responded: “You cannot silence me or the millions of women who have gotten off the sidelines to speak out about the unfitness and shame you have brought to the Oval Office.” Now, if Trump had tweeted, “Chuck Schumer came to my office and he would do anything for campaign contributions,” what would people think Trump meant? Would somebody have thought he meant a Lewinsky? Well, that’s what they thought when he was talking about Kirsten Gillibrand.

What would they have thought if Trump said, “Chuck Schumer would do anything for campaign contributtions”? Would they have thought something sexual about that? What would men do to get money that’s not sexual? Pass laws favoring the contributor? Remove a regulation, grease a wheel, get an invite to the White House? Could be anything. And that could have been what Trump meant. She would have done anything for this.

So now here is Kirsten Gillibrand with Christiane Amanpour sitting in for whoever on CNN International, says, “This is an unprecedented time in American politics. The world is gripped by this saga. Here it now takes aim squarely at Trump and this whole #MeToo movement gains momentum. Should the White House be worried, Senator?”

GILLIBRAND: President Trump should resign. These allegations are credible. They are numerous. I’ve heard these women’s testimony, and many of them are heartbreaking, and President Trump should resign his position. Whether he will ever hold himself accountable is something you really can’t hold your breath for, and so Congress should have hearings. They should do their investigation. They should have appropriate investigations of his behavior and hold him accountable. This is a very powerful moment in America’s history, and not only —

GILLIBRAND: — should they be heard, but they should be believed.

RUSH: Stop the tape. It’s fake! All of this is ginned up! It is a political opposition research strategy! All of this is fake. You have been building up to this. Everything these people do is fake. It’s all structured. It is all manufactured. And the voters saw it during the election and the Access Hollywood video release. And they’re seeing it in the same kind of orchestrated campaign that appears to be genuine and of the moment with Roy Moore, but it’s all planned, scripted, written out, timelined, as this is.

Now, all of a sudden when Franken’s gone and some others, now Congress needs to investigate Trump? And who’s out there digging up information for this? None other than the greatest reputation in all of Washington, Robert Mueller. The whole thing is ginned up, folks.

RUSH: Stand by sound bite number 25. So Kirsten Gillibrand, for the last 20 years, madam, you supported, you endorsed, you hobnobbed, you took money from and God knows what else from the likes of Bill Clinton and Harvey Weinstein. You’re right in there with ’em. You’re defending Clinton, didn’t do anything wrong, nothing to keep you at your distance from him, he was a hero of yours just like he was the rest of the Democratic Party. 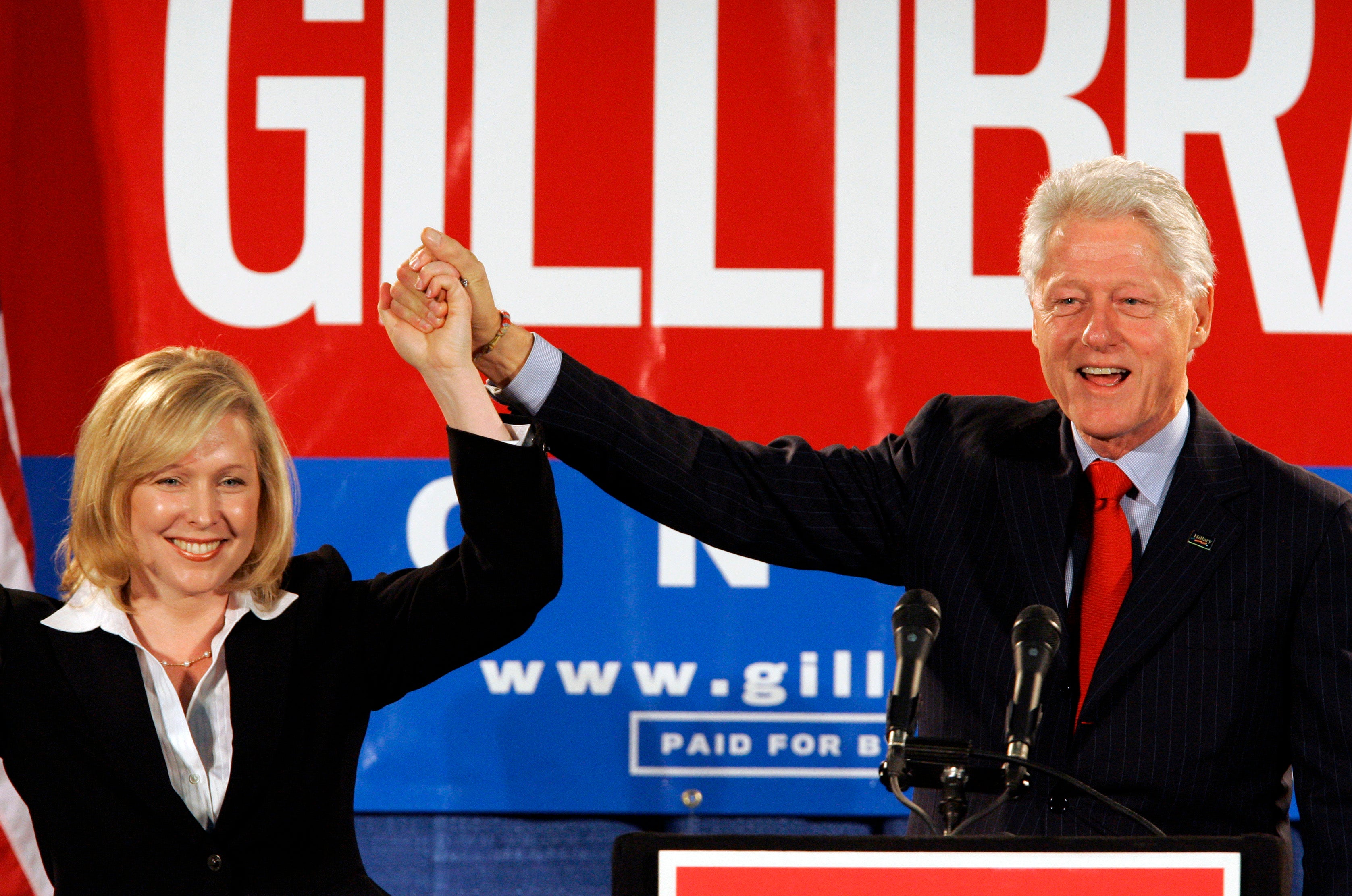 Well, Trump is right. You are a hypocrite, and more. You are the one not genuine. You’re the one perhaps who should be ashamed. You are the lightweight here, Ms. Gillibrand, Senator Gillibrand. The selective outrage so obviously part of an opposition research campaign.

And there you are, dependable as ever, willing to be the biggest hypocrite on earth, now that others, including you, have decided to throw Bill Clinton overboard which you probably don’t even really mean ’cause you didn’t do it when it mattered. You just did it to clear the decks for going after Trump. Here is Kirsten Gillibrand, now a victim, a helpless snowflake victim of Donald Trump’s tweets, words in the ether. Here’s what she said.

GILLIBRAND: It was a sexist smear attempting to silence my voice. And I will not be silenced on this issue. Neither will the women who stood up to the president yesterday, and neither will the millions of women who have been marching since the women’s march to stand up against policies they do not agree with.

RUSH: She’s a victim. She’s a victim of Trump’s tweets. So mean. It’s so unfair. But she’s not gonna be silenced, and neither are the other women wearing those vagina hats ever since the inauguration. Not a bit.