Insane Liberals Make Fools of Themselves Over Net Neutrality

RUSH: They’re voting on net neutrality today. Ajit Pai running the FCC and man, folks, the panic is all over the place. Do you remember — some of you might remember this name. Some of you might not. Does the name Sandra Fluke ring a bell? Well, Sandra Fluke apparently has been recruited to help the anti-net neutrality forces marshal their action today to protest the vote, which is gonna happen, and the Obama era net neutrality regulations are gonna be relaxed, which is good for an open internet.

Sandra Fluke has tweeted that killing net neutrality would kill access to abortion information. “Before tomorrow’s vote, take action with @NARAL to demand the @FCC keep internet open for #ReproFreedom.”

If you’ve ever had any doubts about what this is, this ought to end them. Net neutrality is nothing but another one of these uber-left-wing socialist, slash, communist causes that expands the government and gives it total regulatory power over the internet. There are other tweets today claiming climate change depends on net neutrality. If the net neutrality rules and regulations are relaxed today, that that’s bad for climate change.

You want a little irony or hypocrisy? From The Daily Wire: “Hollywood Celebrities Throw Christmas Fundraiser — For Planned Parenthood.” Now, you might thinking, “So what, Rush. So what.” Well, what is Christmas? It’s celebrating the birth, b-i-r-t-h, virgin in front of it, celebrating the birth of Jesus Christ. And now you have a variety show fundraiser for the organization that ends the lives of so many babies before they’re born.

And they are Hollywood. What is it, 1.3 million abortions a year at the peak. I don’t know what it is now. So abortion celebrated all over the left today, net neutrality, even have some audio sound bites on this.

Let me find where they are, ’cause I didn’t know I was gonna lead with net neutrality. So bear with me here, folks, while I find out where this stuff is. As of the first page, I don’t know where it is. So I’m sorry. Page 1, cut 3. Da-da-da-da-da-da-da-da. Okay. Mignon Clyburn. She’s the daughter of James Clyburn of the Congressional Black Caucasians. She is a Democrat member of the Federal Communications Commission, and this morning outside the FCC during a protest over the ending of net neutrality Mignon Clyburn (her nickname here is “Steak,” Steak Clyburn) had this to say…

CLYBURN: This is about internet equality!

CLYBURN: Internet equality, net neutrality! We will win at the end of the day!

RUSH: Very got confused there. Internet! Internet? What is that, “internet newquality”? She meant to say “internet net neutrality.” (sigh) Never has there been a more misnamed, fraudulent, phony issue than net neutrality. They want you to think that putting the government in charge of it and regulating it is gonna keep everybody on it equal and the same. (chuckling) It’s the exact opposite! They want to turn the internet into a utility, is what they mean. They want it regulated like the power company is and like the phone company is. 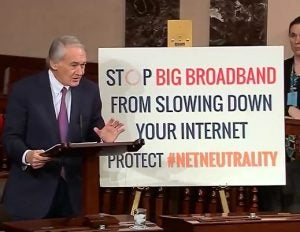 MARKEY: (haltingly shouting) This is a fundamental issue of equality! This is about insuring that people without fear that they will be cut off can say, “Black! Lives! Matter!”

MARKEY: That they can say, “Yes (sic), she persisted,” that it is possible for any voice, no matter how small, to be online. That any company, no matter how small, can get online without fear of having themselves tipped upside down and having money shaken out of their pockets by the big broadband barons.

RUSH: (impression) “So! We! Must! Have! “Net! Newquality! So! That! We! Can! Have! Black! Lives! Matter! And! So! That! She! Can! Say! She! Persisted! And! So! That! We! Can! Make! Fools! Of! Ourselves!” And then you go back to Sandra Fluke: We need net neutrality or women are not gonna be able to find out how to get abortions. It’s like magic, folks. When the FCC votes to roll back Obama-era, oppressive regulation of the internet, immediately women are gonna be walking around dazed and confused!

Here Chuck You Schumer in Washington on the Senate floor…

SCHUMER: If net neutrality is eliminated, the internet may resemble a toll road with the highest bidders cruising lining private, fast lines, while rest of us inch along on a single traffic-choked public lane. We could be forced to purchase internet packages much like cable packages, paying for more popular sites. It’s hard to imagine an entrepreneur building the world’s next revolutionary billion-dollar company while she (sic) sits in a bumper-to-bumper traffic online.

They are seething at this massive thing which is getting everybody involved. There was more free speech on the internet when it first started and for the next 15 years than there’s ever been anywhere. There was more access to information the first 15 years of the internet when it was unregulated than anything ever in human history. New companies were born, large and small. Some succeeded; some failed. But it was a… Look at what happened to the tech industry with a free and open internet for the first 15 years before Obama and his crowd figures out, “You know, we don’t have any control over this! We want to get our mitts in it.”

Think back 10, 15 years. How bad was the internet? Look at all that was there, and it was free. You want the New York Times? It was free. You want anything; it was free, because they didn’t know how to monetize it at first. Then they started doing paywalls, but that had nothing to do with internet regulation. That had to do with profit. So if you wanted to read the New York Times on the internet and you didn’t have a subscription, lo and behold, you had to pay for it. Why would that be? Well, it costs them to produce it, or anything else.

My point is for the first 15 years of the internet, you could do anything you wanted on it. You could access anything you wanted on it. It was wide open. It grew and it created multibillionaires left and right. There was nothing wrong with it except the left didn’t have their hands on it. Here comes Obama, net neutrality, some… You know, net neutrality is the same as affordable health care for all Americans. There wasn’t nothing affordable about Obamacare, was there? You remember, “You get to keep your doctor and keep your plan if you like it”? They’re doing the same lying technique here with net neutrality.

RUSH: You know, we’ve only had net neutrality for a couple of years. What did women do to find out where to go to get abortions before that? Does anybody know? How did it happen? It must have been really tough, must have been really arduous. Because you go back three, four, five, as far back as many years as you want, we didn’t have net neutrality, and yet abortions happened. How?