RUSH: John Solomon, Alison Spann had at TheHill.com: “A well-known women’s rights lawyer” Lisa Bloom, the daughter of Gloria Allred “sought to arrange compensation from donors and tabloid media outlets for women who made or considered making sexual misconduct allegations against Donald Trump during the final months of the 2016 presidential race, according to documents and interviews.” 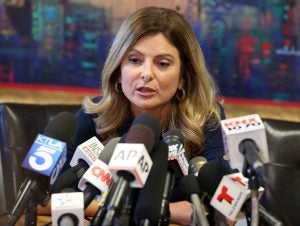 Now, let’s be clear what this story says. The story says that Lisa Bloom “sought to arrange … for women who” would come forward and accuse Trump of sexual harassment, to be paid by either tabloid media or donors, in order to get them to come forward. She offered “to sell alleged victims’ stories to TV outlets in return for a commission for herself, arranging a donor to pay off one Trump accuser’s mortgage and attempting to secure a six-figure payment for another woman who ultimately declined to come forward after being offered as much as $750,000…”

Now, wait. This story does not say the women were lying. It doesn’t go that far. The story makes it seem as though these women were women who had legitimate, alleged complaints, and Lisa Bloom was finding ’em and, to get ’em to come forward, was offering money. The payment of a mortgage, 750 grand. The money would come from donors, presumably Democrat donors, and tabloid media would pay for it. Now, as I say, the story does not allege that the women were making it up.

But with this story, how far away from that are we? With this story — with an anti-Trump female lawyer offering to pay women to come forward with stories about being harassed or abused by Trump — how far are we away from somebody offering women to make up such stories and be paid for it? Seems to me we’re not far from that if we at least know that this happened.