The Tax Bill Will Pass

RUSH: Folks, this is funny. During the break, I checked the email. I’ve got an email from a friend that says, “Hey, Rush, I’m in D.C. I’m listening to you right now. I’m heading back to Israel in a few hours, would love your take on the tax bill’s prospects.”

Now, want me to translate this for you? “Hey, Rush, I’m in the airport getting ready to fly to Israel. What the heck are you doing wasting our time on net neutrality? Don’t you know that the tax bill is gonna be presented in five –” 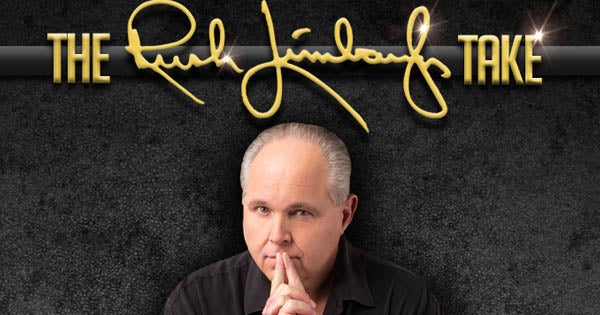 This guy is very gently trying to tell me that I had better get this show back on track, back on things that really matter, like the tax bill’s prospects. Okay, Joel, I hear you. Tax bill. It’s gonna pass. They’re gonna present it at 5:30 today. The showboating senators got their time on camera with their concerns. They’ve obviously been addressed. Democrats can’t stop it. They’re not gonna seat this clown, Jones, next week. McCain will vote for it. Cochran will vote for it. Corker probably won’t, but with Pence, it’s gonna pass. I don’t have any doubt.

To me it’s such a fait accompli, that’s why I’m not talking about it. I don’t think, folks, that there is anybody in broadcasting who has explained more about taxes and this bill than I have. But you know me. I follow my passions. I told you how this all got started. I got out of bed today, I was ready to go and I saw these two things on net neutrality, it ticked me off. It got me launched on a whole other subject matter.

But that’s my take on the tax bill. He asked me about the prospects. He’s not asking me about the contents. And I think that it’s gonna pass. “Why, why is it gonna pass?” Because the Republicans can’t afford for it not to. Not after what happened in Alabama. And not after what happened in Virginia. They’ve gotta do something that is on the agenda of the guy who won the presidential election. Plus it’s a good deal for the most part. The Democrats have their usual caterwauling about it. “Well, it’s a sop to the rich. The middle class is gonna –” whatever.

You could eliminate the tax code, you could have a piece of legislation that gets rid of taxes and the left would say it’s hurting women and the poor more than anybody else. They would find a way to criticize it the same way they always do. The fireworks may not be over on it, and the Democrats gonna do what they can to kill it, of course, but I think it’s gonna pass. Is that okay? Can I move on now back to what I care about?