They listed climate change as an element that needed to be considered in strategizing training missions and so forth. And I remember the first time I saw this, I threw my hands up in total frustration and said, “How in the name of Sam Hill can anybody with a brain actually believe this?” And I asked myself about a lot of stuff, how can anybody really believe it? Of course the answer is they don’t. They feel it. And then that takes you into the entire labyrinth of psychology, trying to understand it.

And then you realize, to hell with that, just defeat them. We don’t need to get down in the weeds here and let them establish some premise and debate them on the premise. They just need to be defeated. The notion that climate change poses a threat to national security. Look, it’s a hoax. Climate change is a hoax. It’s absurd that it’s even a story, but that it becomes a genuine threat to national security in the Obama administration. We can’t even predict the weather!

No, wait. Climate change isn’t happening yet. You advocates forget, it’s not gonna happen for 30 years. So you can’t say that they’re coming because it’s getting warmer, because it isn’t! You’re telling us the damage is not for 30 years or 40 or 50. So Trump is taking away the designation. Climate change will no longer be listed as a national security threat. Common sense big time returning to the federal government here and there, and this causes an insane reaction from people on the left.

Now, as you know, we have a ban here on the network MSNBC. The reason for the ban is that I finally that figured out by constantly calling attention to what was happening on that network, I was creating curiosity about it. And this was leading to more and more people tuning in and watching it, which of course is not the idea. It’s counterproductive. We do not want to create an audience for this bunch.

And I said, “I am willing to broom some of the admittedly entertaining aspects of the program for the larger cause of not helping this network grow. This has been a source of great frustration to production assistants who search for sound bites because that’s a very rich mine that I have closed off. But occasionally, as is the case with all bans, we lift it. And I heard of an interview that happened late last week on MSNBC with Ali Velshi.

This guy is a former CNN reporter. He’s an economic dunderhead, but he thinks he is an expert on everything. And he literally doesn’t know 90% of what he claims to be an expert on. He interviewed a man by the name of Robert McDowell, who is a former FCC commissioner. And it’s about the net neutrality vote.

First sound bite, Ali Velshi. “The internet, as we know it today, and the things most people consume, Facebook, Netflix, Amazon, those companies came about because small startups had access to this fantastic internet. And if we were to impose the ability to slow down some parts of the internet or speed it up for money, we may end up freezing the internet in time and that these big companies exist as big companies, there will be no competition to Facebook or Google or Amazon because startups are gonna be denied access to the internet.” Here’s Mr. McDowell.

MCDOWELL: What the FCC did in February of 2015 was put a 1934 law, the Communications Act of 1934, a part of it called Title II on to broadband internet networks. But before that that’s when all those companies you just cited were actually started in dorm rooms and then became some of the world’s largest corporations. The question is before February 2015, what worked? You have the Federal Trade Commission Act, you have the Clayton Act and the Sherman Act, those are three very powerful federal statutes that kept the internet open and free prior to February 2015. To hear some people talk today you’d think the internet started in February 2015.

RUSH: Okay so what this guy was telling Ali, “Ali, the thing you’re afraid of actually happened from the day the internet was invented until 2015 when Obama put net neutrality laws on it. Exactly what you want was what the internet was. It’s Obama who has changed access to the internet in the last two years.” But Ali Velshi doesn’t get this. He thinks that there has never been a free and open internet until Obama came along and made it free and open two years ago.

Next question: “But if Facebook wants to say that they’ll spend a billion to subsidize your internet plan so that you pay less for your monthly fee, but Facebook gets preferential treatment, if a startup tries to launch a competitor to Facebook and if I don’t have that money to pay, I could get slow speed and people will say, why would you ever use my service as opposed to existing one that paid for the fast one?” 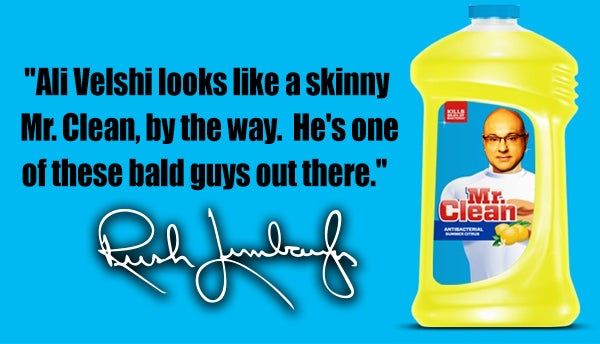 What he’s wanting, his question, why can’t we get Facebook, a rich guy, to subsidize a startup? They have so much more money, it isn’t fair. So he wants Facebook and existing big guys to subsidize startups because he thinks this new internet law, net neutrality, will eliminate startups, which he’s dead wrong about, but here’s the answer.

MCDOWELL: Section 1 and section 2 of Sherman Act and section 3 of Clayton Act, you just triggered all three of those sections, that would be an anti-trust violation. Federal Trade Commission could go after ’em also under section 5 of the Federal Trade Commission Act. That was against the law before February 2015, and it will be against the law as of today.

VELSHI: Look, I don’t feel like we’re having a really, a really fair conversation here.

VELSHI: I’m trying to have a conversation on the — on the merits of the principle of unintended consequences of reversing net neutrality, and you’re dropping a lot of legalese.

VELSHI: We know full well that the Federal Trade Commission —

MCDOWELL: The legalese are the merits, though, Ali. That’s what’s at play here, and maybe you haven’t read these laws, you don’t understand them —

MCDOWELL: In Section 1 and 2 of the Sherman Act —

VELSHI: I’m really not that familiar with being condescended on.

RUSH: So this guy, Ali Velshi, was suggesting what is against the law. It’s against the law for these big guys to subsidize certain people they choose over others, and it would trigger anti-trust legislation before net neutrality and after it. And Velshi (imitating Velshi), “I’m sensing you’re dropping a lot of legalese on me, and I don’t feel like we’re having a fair conversation,” because he’s getting his ass creamed because he doesn’t know what he’s talking about.

RUSH: I’ve got one more example of Ali Velshi — he looks like a skinny Mr. Clean, by the way, one of these bald guys out there. He’s interviewing Robert McDowell on PMSNBC, the former FCC commissioner, who is just making mincemeat of this guy Velshi. Velshi knows it but he doesn’t think anybody else does, and so he’s trying to cover up for that. More in a moment.

Back to the internet. Ali Velshi trying to save face in the midst of a common sense onslaught by former FCC commissioner Robert McDowell. This is on MSNBC, it was last Thursday. After Ali Velshi, ex-CNN, tells McDowell he doesn’t like his condescending tone, he said, “I feel like you’re condescending me with no reason whatsoever. I don’t think we’re really having a fair conversation here. I’m trying to have a conversation about the merits of unprincipled, unintended consequences, and you’re just dropping legalese on me.”

And McDowell said (paraphrasing), “Well, legalese is the issue here, Ali baby, and you don’t know what you’re talking about.” So here we pick it up. That’s the final bite coming here.

VELSHI: We’re not in a court of law. There’s no judge in front of us.

MCDOWELL: I understand. But to your point, which is you’re saying consumers aren’t protected. That’s just not true.

VELSHI: I did not make that argument once. I didn’t say consumers. You’ve come to this show ready for an argument that I’m not giving you. I’m saying —

VELSHI: — that if someone has an advantage in streaming their content over the internet, an established player has an advantage because they’ve got the money to be able to buy better, faster, quicker access or prevent somebody else from getting it, the incumbent is favored over the startup. That’s the only point I wanted to make. That’s the only point.

MCDOWELL: And that would be illegal. That’s the point I’m making. What you just said is already illegal. I know it’s good clickbait to say the internet’s being destroyed, but it’s not.

RUSH: It’s already illegal! The point about net neutrality is from the beginning of its interception to two years ago was exactly when it grew and expanded and offered freedom. It was only the last two years we’ve had net neutrality. Ali Velshi is sitting here worried that the big guys are gonna eat the little guys and deny the little guys. And what McDowell was telling him, everything you’re afraid of has been against the law and still is against the law. There are three different antitrust laws that all would have impact here.

But these people live under the mistaken impression their starting point is that Obama fixed because Obama could do no wrong. Obama let Hezbollah keep trafficking cocaine to make sure his Iran deal happened so that Iran would get nuclear weapons. Obama presides over a declining economy and calls it the new normal, said, get used to it. Obama says if you like your doctor, you like your program, you can keep ’em, lying through his teeth 18 different lies on health care alone! Obama destroyed the American health care system.

They think Obama fixed the internet from the unfair advantages of the rich and the wealthy and the big people. Obama fixed it. And the last two years is the best the internet’s ever been, and now Ajit Pai came along and just erased what Obama did. Now the internet’s back to what it was for the first time first 15 years, illegal and a playground for the rich.

These folks are so dense and so stupid but arrogant about their ignorance, it is stunning! (imitating Velshi) “I didn’t come here, I did not once come here for a conversation about consumers. And don’t you ever –” He thinks he knows so much about this, he doesn’t know half of anything. Of course, he’s a liberal and everything they know is propaganda and lies that’s presented and received in hatred.

That’s why I say, folks, it makes no sense to get in the weeds with these people and start debating the merits of things. Just beat ’em. Just defeat ’em. Whenever the chance comes up, like this, get rid of Obama’s heavy-handed regulation of the internet of the last two years, take it back to what it was when it grew and you could get anything you wanted on it. Nobody complained about anything, until the last two years.