RUSH: President Trump just concluded a speech on national security, and he had a very interesting thing to say. It inspired a realization in me. He said, “Our past leaders built up nations overseas at the expense of America.” He had one name in mind, and that’s Barack Hussein Obama. But there are others. “Past leaders did not protect our borders.” He said, “By expanding our wealth, we become a great nation which can help spread wealth around the world.” He said, “Americans have lost their belief in American greatness.”

I don’t think that’s… It’s a fine point. This speech, apparently — the excerpts that I am seeing. Apparently, this was a home run. This speech, it sounds to me — just on these little one-line excerpts I’m seeing — was just fabulous. He said, “We’re leaving an unfair climate accord. We’re not getting into bad trade deals.” But he focused on the great things that happen as a result of America getting wealthier, in terms of worldwide leadership and inspiration. Remember not long ago there was a day that was particularly disruptive? 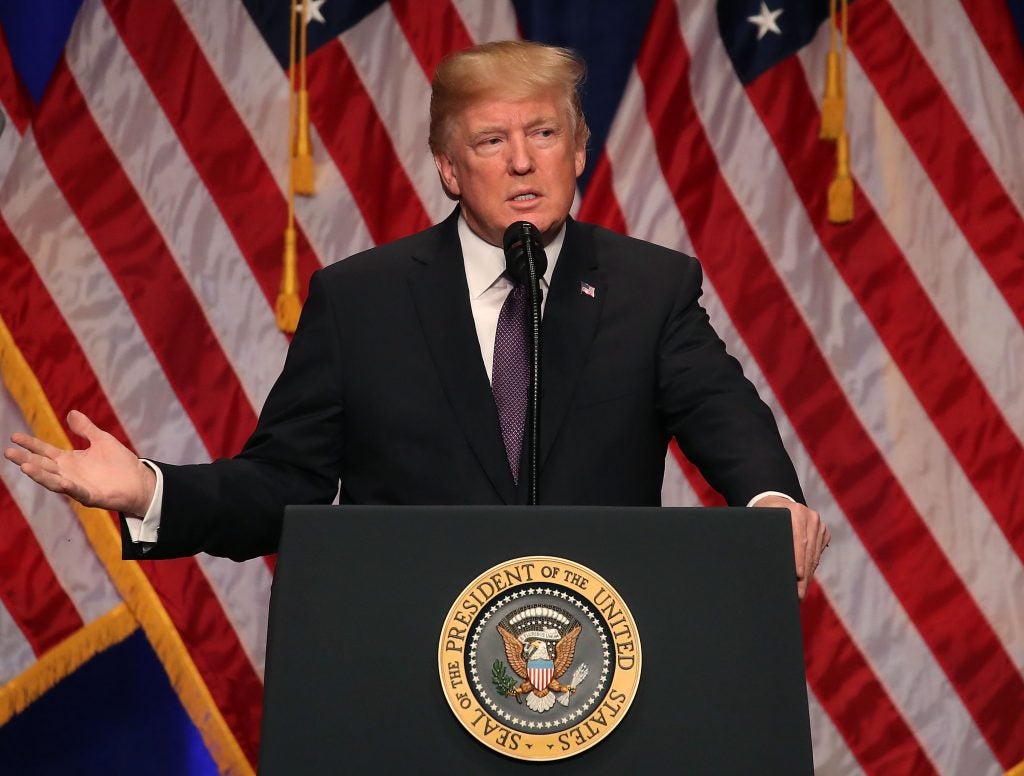 I don’t remember what the particular event was, but one of the rejoinders we all had was, “What do we as Americans have in common anymore? What is it that binds us?” You go back to World War II, and we were bound together. We were a single nation. Yeah, we had some malcontents. But, I mean, for the most part this country was united around victory and defeating evil in Japan, in Europe. We were focused on the concept of American victory and American greatness. And we don’t have that now.

There are people… When Trump talks about expanding American wealth, there is a sizable number of Americans who do not want that to happen. That’s immoral. That’s unjust. America shouldn’t be wealthier than any other nation. But Trump’s not talking about wealth that’s acquired by stealing from others. He’s talking about a renewed focus. “Make America Great Again.” Make America grow. Make America rich! Make it wealthy in all ways, in all areas. Make people proud to be Americans again.

We’ve got way too many Americans who aren’t proud of America and will never be, and that’s a shame, and that’s the result of a liberal onslaught that has been going on since before I was a kid. I just saw that one little line, that excerpt about the great things that can happen from growing American wealth, as a nation. He’s not talking about individuals getting richer. He’s talking about the country as a whole expanding its wealth — its economic wealth, individual wealth — and with that comes power to inspire.

And it used to be that these were the kinds of things that we as Americans were proud of. We were actively proud to be Americans at one time. It was something that we carried around with us. It wasn’t spoken often, but it was a constantly felt reality — and it wasn’t at the expense of our people. It wasn’t that we were better. It was that we were winning. We were on a winning team. America was a winning team doing good, and we were proud to be on that team.

And that’s gone now! After eight years of Obama, but even before that, the universities are teaching people that that kind of thinking is morally, that it’s unfair. “There is no ‘better than.’ There is no ‘wealthier than.’ All of that is unjust and immoral, and it’s typical of the American founding, and it need not be. It shouldn’t be.” So today there are Americans who don’t like their country, ashamed of their country for silly, illogical reasons. There are people that want their country continue to be torn down in size because somehow that’s fairer and more equitable.

Those people do not see the benefit to the world of a great and wealthy and growing America. They see America as somehow — and it defies logic — oppressive and as imperialistic. And as I’m look at these one-line excerpts from his speech — and we’ll have it in detail tomorrow. I’m not gonna start getting into it today. I’m just promise you tomorrow. I can guarantee you (chuckles) it’s gonna be a bang-up segment. This speech apparently is where Trump really, for the first time since his campaign, articulated and spelled out his encompassing vision for this country and what it can again be.

He said that the greatness of this country has always been its people. Now, that you may think, “Well, that stands to reason. What is a country but its people?” He means it’s not the government. He means it’s not some series of programs. What has made this country great is the people, and what has enable their greatness has been freedom, liberty. The Declaration of Independence: “We are all endowed by our Creator with certain inalienable rights: life, liberty, and the pursuit of happiness.”

And when Americans pursue those things and achieve them, greatness happens, growth happens. Growth is not a dirty word. Economic growth is not a dirty word or dirty principle. It’s not exclusive. It’s not exclusionary. But apparently we had today an articulation of what this country once was when everybody loved it and was proud of it and actively adored being an American and being part of this team that made America what it is. It was proud to be an American when you traveled internationally.

But this is how they’ve been trained. It’s how they’ve been educated and taught. They see no benefit to a great America. They see no benefit to American exceptionalism. They see only injustice and racism and sexism and all the other isms. They’re delusional. They’re sick. They’re wrong. They dominate education, academia. They dominate media. They are negative, they are pessimistic, and they are fatalistic. And that is not who we are, and those are not our values.

I don’t care how often they cite what they claim are our values. Our values are not pessimism, negativism, fatalism, defeatism, none of that. Our values do not include, “We deserve second-rate. We deserve to lose! We deserve it, because we have unjustly and unfairly succeeded.” I could be dead wrong; the speech could have been a total bomb. But from the one-line excerpts I’ve seen I’ve been able to at least put this much together about it.