RUSH: Trump was explaining to people in the cabinet meeting when this is all gonna go into effect and how it’s gonna happen and here’s the first of the three bites.

THE PRESIDENT: The heart of our bill is a tremendous amount of relief for the middle-class, including a doubling of the child tax credit and the nearly doubling of the standard deduction. That’s going to be tremendous to people. They’re going to start seeing the results in February. This bill means more take-home pay. It will be an incredible Christmas gift for hard-working Americans. I said I wanted to have it done before Christmas. We got it done.

RUSH: Now, as I said in the previous hour, the Drive-Bys are trying to say that since this thing just got done, this is gonna lead to a big hangover. Got so much done that they’re gonna not be able to replicate this. Don’t look for anything of any major importance. Next year’s an election year. Trump can’t afford to take any chances. So this is pretty much all you’re gonna get. The lying, the distortions, the mischaracterizations know no end. Well, contrast that to Trump’s next sound bite here. 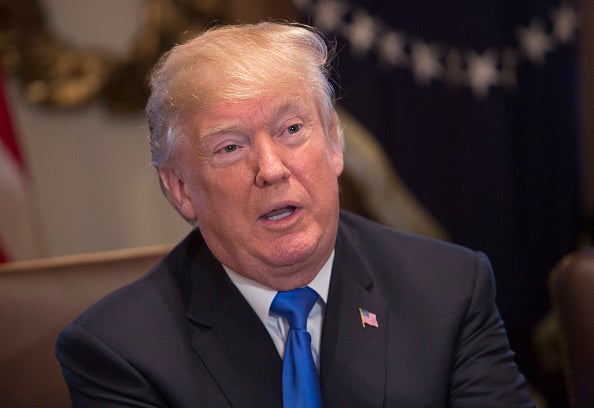 THE PRESIDENT: We’re restoring immigration enforcement at levels that our country has never seen before and taking the fight to the criminal gangs like MS-13 where we’re decimating those animals. They’re animals. What they do is horrible. Horrible. And we’re making the immigration system work for Americans. But we’re cleaning out towns of those MS-13 gangsters. That’s why we’re calling on Congress to fund the border wall which we’re getting very close to.

RUSH: Uh, uh, uh, uh, uh, border wall, oh, no, they forgot about that. Trump’s gonna move on to the border wall. But what about the hangover? What about taking time off? What about reveling in the achievement here? They’re not gonna be able to keep up. You know one thing I keep remembering from the campaign? It’s one of the things that Trump said frequently that always hit me and registered with me, and I think Trump voters heard it, too. And it was nothing that he made a major point of saying. When he said this, it was almost as an afterthought or continuation of a major point that he had made.

And it was nothing more than, “We are going to work so hard for you.” He was talking about whoever he put in his cabinet and his entire administration. He would make a major point about some achievement that he was gonna do. And he’d follow it up as the applause was deafening. “We are gonna work so hard for you.” And I don’t know how many of the opposition paid any mind to it, paid any attention to it, even noticed it, but I did.

Because it was in those kind of off-the-cuff, off-hand moments that you get the unbridled, unprotected honesty. And it was the way Trump was telling these people at the rally how he was different and who he was. “We are going to work so hard for you.” This would come after an explanation of doing the wall or fixing trade deals or something.

And he would say it realizing that he had just laid out an enormous agenda. I mean, every rally contained pretty much every agenda item. And before long, it occurred that this is a lot. This guy is gonna cut taxes, he’s gonna repeal Obamacare, he’s going to build a wall, he’s going to reinforce the borders, gonna do new trade deals, gonna get us out of the U.N., all this — I mean, a massive amount of stuff.

And as he would go through it at each rally, occasionally he would say — while the applause is ringing out and deafening, “We are gonna work so hard for you.” And this is an example of it. Makes a promise to not forget about doing the wall while the left is thinking, “Oh, my God. How do we stop this? How do we change people’s minds on this?” ‘Cause, folks, do not doubt me. They’re in a state of panic over this.

They’ve been through this, the left has, we all have in the 1980s. They know this works. They know this illustrates the lies that they tell. They know this illustrates the folly of socialism and their beliefs. They have to try to destroy it in your mind. They have to try mischaracterize it. And that’s why they’re in a state of panic. And now not one of them can say they voted for it while we’re in the midst of booming economy next year, not one of them can claim any credit for it. ‘Cause every one of the Democrats voted “no” on this. Here is Trump making a point, serious point here of something that is included in this tax reform.

He hasn’t changed a bit. The agenda is the agenda. He’s moving forward on it. He’s had a greater first year in moving an agenda against more odds than have ever been arrayed against a sitting president, he’s had more success than any Republican you can name. You’d have to throw Reagan in that conversation. But it is astounding, it’s phenomenal, and I’m gonna go back to that speech that he gave on Monday that I wanted to get to yesterday and didn’t. I’ve got the bites here, we’re gonna go back to it, ’cause all of this flows together. All of it just flows together.

Now, not all of Obamacare. When I say “the guts,” the mechanisms that actually make it work. It’s going to lead to an even more rapid implosion of Obamacare, what with the mandate vanishing.

Now, Nancy Pelosi. Wasn’t it just a month or so ago Nancy Pelosi and the Democrats were all saying that all of the Founding Fathers were racist slave owners and all of their beliefs mirrored their era and they’re not relevant today and that we shouldn’t be paying any attention to the Founding Fathers and taking down some of these statues that we’re taking down is perfectly fine? Anybody remember this?

Pelosi and the left all during last year, I mean, it wasn’t just a month ago, yeah, but even further back than that, all the way back to Charlottesville, any of the things that the left thinks are seminal identification moments. “Our Founding Fathers, they’re a bunch of racist slave owners. They’re not worth being idolized today. I mean, yeah, they were good for their time and good for their day, but their beliefs only mirrored their era, and they’re not relevant today,” which is part of the argument that the Constitution should live and breathe and change. Meaning we should be able to get rid of the Second Amendment because we want to and all of that.

Now the morning after the tax cuts bill passes, she says that it does violence to the vision of our founders. Nancy Pelosi, Chuck You Schumer, the Democrats wouldn’t know a founding vision if it hit ’em upside the head. “This GOP tax scam is simply theft — monumental, brazen theft from the American middle class and from every person who aspires to reach it,” Pelosi said.

“The GOP tax scam is not a vote for an investment in growth or jobs. It is a vote to install a permanent plutocracy in our nation. They’ll be cheering that later. It does violence to the vision of our Founders. It disrespects the sacrifice of our men and women in uniform.”

Folks, do you believe the degree of panic over this? Not to mention the lies.
Fauxcahontas, Elizabeth Warren, called the tax bill a heist. Now Pelosi, “The GOP tax scam is simply theft, monumental, brazen theft from the American middle class.” So you know what they’re back to saying? This is a tax cut for the rich. It’s a tax increase for the middle class, and it’s a tax cut to the rich.

The Democrats have been out there my whole life trying convince people the rich got rich by stealing money from the poor. And I have never understood the mathematics on that. But here’s Pelosi continuing it. Eighty percent of the American people are going to get a tax cut. Now, when Pelosi utters these lies and these insane inanities, there’s not a single question raised by the Drive-By Media. She’s not asked to explain it.

What happens is that the Drive-Bys go to the nearest Republican they can find and they ask questions using Pelosi’s talking points. They don’t say, “Well, Nancy Pelosi says that this is theft.” The Drive-Bys say, “Well, this looks like theft to us. It looks like your tax cut is actually stealing money from the poor and the middle class and giving it to the rich.” They just start reflecting and repeating Democrat talking points as their questions.