Conservatism, Not Populism, Wins for Trump

RUSH: There’s another thing here that I need to… Not get off my chest. It hasn’t been that big a deal. This whole idea that Trump and Bannon are some sort of massive populist movement, and, therefore, that is bad and it’s nationalistic?

That’s not what has been going on here. Populism has not been what’s going on. This is sour grapes losers using this term to describe it. Now, maybe Bannon, some of his people picked it up and ran with it because, “If that’s what people thought it was, then fine. We’ll give ’em what they think we’re doing.” But really, you’d have to look far and wide to find a more conservative administration than this one, and you know when Trump gets in the least trouble is when he does conservative things.

In fact, “replace” should never even be part of that conversation anyway. Repeal, period! Now, you move forward to the Trump tax cut. Now, that is something, and that’s legitimate and that’s real, and the benefits of that tax cut are already being experienced, and they have yet to really kick in. We’ve had company after company after company announce hiring, announce bonuses. We have American corporations with a lot of money parked overseas. They’ve announced they’re gonna repatriate it for a one-time, 10% tax.

This economy is on the verge of booming like we talked about right before my last couple of days here. This economy is poised to just take off, and it makes it even stranger to look at how the Democrats are setting up 2018. They think they’ve already won 2018. They think it’s over. They think they have succeeded in dredging up all this Trump hatred, Trump incompetence, Trump this, Trump that. And they believe everybody hates Trump like they hate Trump and they think it’s widespread.

They are ignoring the real things happening on the ground in terms of the economy that affect real people. We all remember CBS News when it went out and actually got visas to go into some Midwestern states where CBS normally doesn’t go. They wanted to find average, ordinary American families and apply the Trump tax cut to their income circumstances to prove that Trump’s tax cut was not gonna cut their taxes. In every instance, CBS found — this family, that family, this family over there — their taxes indeed are going to be cut.

It quickly was discovered that over 80% of American taxpayers are going to experience a tax cut. Millions of Americans are already feeling the benefits, even though it has not been fully implemented. Even though the withholding tables do not reflect more take-home pay (that’s not gonna happen until February), the effects of this tax cut on American business, on the American psyche is already being felt. That is something real, and that was practically top-to-bottom conservatism. There wasn’t any populism in this tax cut.

And in fact, if there were populism in this tax cut, there would not have been a reduction in corporate rates because populism requires that corporations/big businesses are the enemy. Populism is devoted to the idea that the little guy is being set upon by major, big institutions in government and business every day, and the populists come along and they’re gonna defend the little guy against the encroachment of Big Business, mean-spirited employers that don’t pay fair wages — all this kind of stuff — and encroaching government.

Well, there isn’t any populism in this tax cut because (chuckles) the biggest tax cut went to corporations, and that’s going to prove beneficial. I actually saw a story when I was doing show prep today. Some leftist… I forget the website. I’ll find it here in a minute. Doesn’t really matter. I mean, they’re one and the same. He’s now claiming that the U.S. economy from last year didn’t grow nearly as widely, strongly, bigly as other economies around the world, that all this talk about Trump’s great economy is a bunch of hoo-ha.

No, that’s the hoo-ha! There wasn’t any economic growth in the eight years of Barack Obama. There was very little economic growth in the last two to three years of George W. Bush. They were occupied by the media and the Democrats trying to lose the War on Terror and the war in Iraq. The economic change of fortune in this country in 11 months is striking. It is impossible to ignore, and it’s very difficult to rewrite, although they’re trying to. What worldwide economy did better? ChiComs? Vietnamese? Europe?

I mean, getting rid of the individual mandate of Obamacare in the tax cut? I can’t tell you… There is more damage done to the life span of Obamacare in that one move than anything they were contemplating in their big time repeal-and-replace Obamacare bill.

RUSH: Now, they’re sitting there thinking that they’re scoring home runs each and every day with all of their anti-Trump rhetoric in the media and Trump’s incompetent and Trump this. Then this book comes out, the excerpt from this book, the Michael Wolff book, and so they’re sitting on top of the world. They’re thinking that everything they have said about Trump and his uncouth personality and his unfitness for office and his barbaric attitude towards women, all of this is now being confirmed. 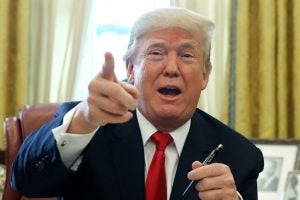 Bill Kristol is one of the happiest guys in Washington. He’s all over CNN thinking this book confirms everything he’s ever thought about Trump. And that is that Trump has lousy taste, that Trump is offensive, that Trump is not fit to be in polite company. And they’re all missing what’s actually happening in the country. They’re missing the revival, the near revival that the country’s on the verge of locking down. Anything could happen to derail it. But they’re all missing it because of their blind hatred and their commitment to getting rid of Trump.

Now, all of these distractions, which is what they are, they don’t seem to have stopped Trump, do they? We got tax reform. Trump is downsizing the federal bureaucracy in ways that people still haven’t been told. Trump has done so much within the federal bureaucracy of getting rid of regulations and getting rid of people to the extent that people on the progressive left know it.

It’s understandable why they would be outraged because Donald Trump is literally dismantling the decades old mansion that they have built that is the federal bureaucracy. He is literally tearing it apart. He is unraveling things that Obama implemented. He is unraveling years and decades-old regulations on such things that matter to them as climate change and immigration.

None of these things are getting any coverage in the media. The newspaper story that recounts these, the blog site story takes 18 pages to print out. So there is all kinds of substantive stuff happening, much of it not being reported and pretty much all of it, if you had to tag it ideologically, pretty much all of it is far more conservative than populist and certainly far more conservative than moderate or liberal.

And I find it fascinating that as more and more, quote, unquote, conservatism is finding its way back into, say, the American economy, the happier and more robust the American people are. And, remember, we’re just in the first stages of the uptick. Of course, anything that we can’t foresee could happen, but as things sit now, this year is set to take off economically.