Dems to 2020 Hopefuls: Stand Aside for The Oprah

RUSH: We have word, ladies and gentlemen, of what President Obama thinks the potential presidential run of Oprah Winfrey. 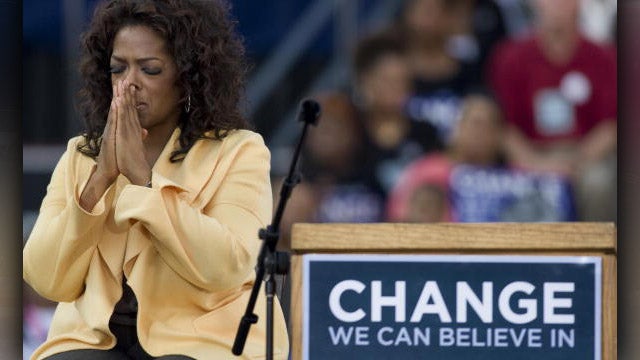 Are they gonna stand aside again? When we get to 2020 are the Democrats gonna say to all of their proven electoral heavyweights, ahem, stand aside for Oprah?  I’m not so sure.  But, at any rate, white comedian Paul Shanklin has put together here a little ditty on Barack Obama and — well, wait a minute.  Is this Obama on this or not?  I’m confusing my O’s.  Let’s just listen.

ANNOUNCER:  It’s time for another O in the White House.  Oprah’s not only a global media superstar, but also the heaviest health spokesman since George Foreman to tell us how to eat.

OPRAH:  On my plan you can eat anything!

ANNOUNCER:  She’s the perfect choice as the Democratic nominee, with even greater skill than Obama at giving away stuff to build her base.

OPRAH:  Everyone gets a new car!

DR. OZ:  We just rub some Jamba Juice on it and your cancer is cured.

DR. PHIL:  Kim, buddy, you just never had any kind of boundaries growing up.  Isn’t that right?

ANNOUNCER:  Yes.  Oprah will tell you what books to read and what ointments to use to reduce the bags under your eyes, as you watch her all day, every day for eight long years.  And as a close friend of Harvey Weinstein, she —

OPRAH:  Johnny gets a new car!

RUSH:  Can’t remind them about the Harvey Weinstein relationship.  Sorry, I saw the O’s in here and I thought maybe it was Obama weighing in, but it wasn’t.

RUSH: Ray in Fayetteville, Arkansas.  Welcome, sir.  Great to have you here.

CALLER:  Hey, I just wanted to talk to you about this The Oprah for president garbage.  If you remember, back in the summer — I believe it was early summer — of 2016, The Oprah fully endorsed Hillary Clinton for president.

CALLER:  Hillary Clinton, the same woman who knew her husband had sexual assaulted women while in the White House, and then went on national TV to disparage and undermine these same women who made these allegations against her husband, Bill Clinton.

CALLER:  Where has Oprah been for the last 18, 20 years?  Did she just finally pull her head out of the sand?

RUSH:  No, I… (sigh)  I don’t think that if Oprah’s even thinking about this, that she thinks Bill Clinton or Hillary would be a factor if she runs.

CALLER:  Well, I’m just saying, you know, ’cause less than two years Hillary was endorsing a woman who basically disparaged women for creating allegations against her husband.  And now she wants to stand with all these other women?

RUSH:  Well, remember, these people do not… They’re not accustomed to hypocrisy attaching itself to them.  They never get caught up in it.  I mean, they’re never held to account on hypocrisy.  She’s got a bigger problem than Hillary, I think, with all the pictures that she’s got of kissing and snuggling up to Harvey Weinstein.

CALLER:  Exactly.  I saw all those too, and how she didn’t know all this was going on in Hollywood for the length of time she was there?  Oh, come on! Give me a break.  She knew full well it was going.

RUSH:  Well, let me ask quickly.  I don’t have much.  Do you have any thoughts on the president’s meeting with the Democrats and Republicans on immigration?

CALLER:  Well, you know, my only thought on this whole DACA, DREAMer act thing is that the American children have dreams too.  My children have dreams.  It should have been never done.  I feel sorry for these kids, but I also feel sorry for the immigrants who came into this country legally and now are being put on the back burner while the DREAMers get a front row pass.  That’s not okay with me.

RUSH:  Not yet.  Not yet they haven’t.  That’s what this is all about.