RUSH: Have you seen the latest news? Trump is gonna go to Davos.  Can I tell you what kind of an excrement storm that could end up being?  This World Economic Forum in Davos.  Who goes to Davos?  Every left-wing powerbroker you can think of from Hollywood to Big Business to entertainment, you name it.

It’s just an adjunct of the Socialist International, and they get together and they find and discuss ways to fleece the United States using issues like climate change.  Trump is gonna go and park himself right in the middle of this bunch.  It is going to be culture shock.  This may be one of the few times I pay attention to Davos.  “President Trump is expected to attend the World Economic Forum at Davos…” It’s in Switzerland, for those of you in Rio Linda.

“Sarah Huckabee Sanders … said the president was looking forward to attending the gathering of world leaders and business executives. ‘The president welcomes opportunities to advance his America First agenda with world leaders,’ Ms. Sanders said.”  They don’t want any part of America first.  At the World Economic Forum in Davos, America is always the problem. Guaranteed 80% of the attendees at this thing think Trump is sick and deranged and deluded and needs to be thrown out of office.

And he’s gonna show up and throw himself right in their midst.  This is wonderful! (laughing) He’s just continuing to take it to ’em.  If he does things like this, if he continues to do things like that, he’s going to continue to succeed.  Jamie Dimon. Grab audio sound bite number 15, I believe it is.  Nope.  It is on the next page.  Grab sound bite number 20.  Actually, it’s 18.  Jamie Dimon, CEO, JPMorgan Chase.  In the past six months, Jamie Dimon has been expressing his total dissatisfaction with Trump, his concern with Trump.

The word has been out that Jamie Dimon has been considering running for president because things are so messed up.  But he’s been very cautious in the things that he has said.  It’s been difficult to ascertain: Is he really ripping Trump or is he ripping other elements?  It hasn’t been that easily determined.  So most people have assumed because he’s a Democrat that he’s also ripping Trump.  But JPMorgan Chase and the CEO from Quest Diagnostics are now the latest to come on board and consider giving bonuses to their employees because of the Trump tax cut plan. 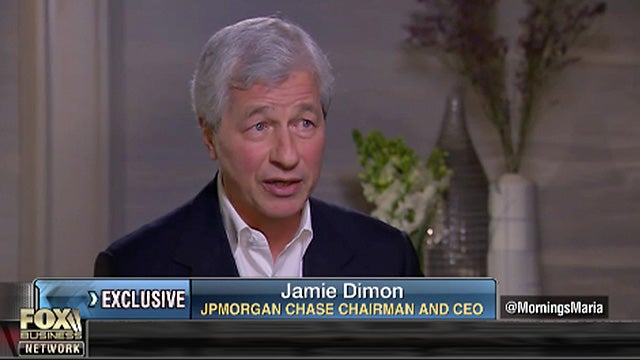 DIMON:  You’re gonna see companies doing things in the short run like increasing wages and, uhh, bunch of stuff like that, one-time bonuses, and we’re — we may do something.  We’re gonna announce it sometime later.  But over time, that retained capital will be used to grow businesses — R&D, hire people, wages, competition — and over time, it will be very good for America.

RUSH:  You never heard this type of talk the last eight years, folks.  You never heard CEOs talking like this.  In the last eight years the Obama administration, these CEOs, instead of talking about expanding within the free market and the open realm of competition were trying to find ways to get close to Obama and engage in what we call crony capitalism or (if you want) crony socialism.  But these people figured out that Obama had an enemies list. The Democrat Party has an enemies list.

It’s largely American businesses, corporations, industries, and the way to protect your industry was to become an Obama donor and to get side by side and be one of his enablers, and that’s how you protected your business.  I mean, they were all jockeying for this.  GE and Jeffrey Immelt were doing everything they could to get close to Obama because these people instinctively know. Even though they might have voted for him and fundraised for him the reason for that is they were afraid of him.

There’s a guy who was promising to transform America, a guy who believed that America’s best days were behind us, a guy who believed that America’s founding was unjust and immoral and that America had no moral authority to tell the Iranians, for example, “You can’t do nukes.”  “Who are we?” Obama said.  And like the people at Davos Obama believed and his cronies that the United States was largely the problem in the world.  So these guys to protect their industries had to sidle up and get close to him.  Now there’s no need to get close to Trump.

There’s no nice day to sidle up to protect yourself business.  All you have to do to grow your business is take advantage of the Trump agenda that is being implemented, and the tax cuts are the first bet here.  Here’s Jamie Dimon again.  This was on the Fox Business Channel today with Maria Bartiromo, and she said, “Trump is the first business president… I remember you were asked recently what you thought his tenure would be.  You said another 3-1/2 years provided the Democrats have a real candidate to push forward.  Do you still think he’s a one-termer?

DIMON:  The thing about the Democrats is, you know, they — they will not have a chance, in my opinion if they don’t have a strong centrist, pro-business, pro-free enterprise person.  Y’know, the American public is not clamoring for more government.

I’m talking about official, elected, office-holding Democrat. Member of the House, member of the Senate. (interruption)  No.  Not unless we think about it.  Jamie Dimon is also predicting 4% economic growth.  My point is if Trump continues to succeed and the Republicans stick with him — which they will as this Russia collusion things fades — the Democrats, rather than thinking they’ve automatically won the House back in 2018, are going to enter this dystopian world of total, permanent political irrelevance if they’re not careful.

I’ve been telling people this for months, and everybody thinks I’m nuts.  But I don’t pay attention to the Drive-By Media.  The Drive-By Media’s soap opera each day is not reality to me.  The reality is that Trump is kicking butt.  And everything they have tried to take him out has bombed, big time.  And this latest thing, this Wolff book, is bombing big time in its mission of taking Trump out.