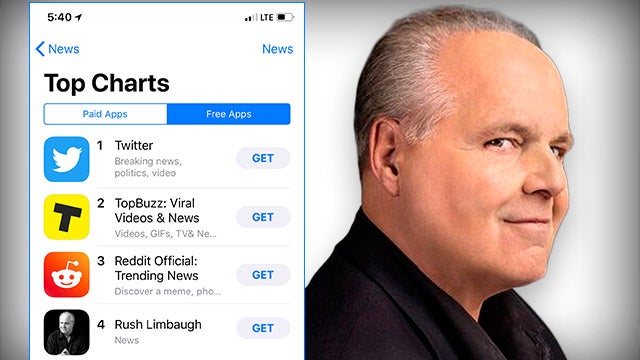 And the RushLimbaugh.com app has been in the top seven for the last 24 hours. It’s floating there between No. 3 and No. 5, and I have been blown away by it! And I took a screenshot of that last night ’cause I was so proud and I sent it to my brother, David. He said, “Do you mind if I tweet this out?”

I said, “No, go ahead.” I worried a little bit. I don’t want people thinking there’s hucksterism here. He said, “They won’t.” So he tweeted it out, and the reaction he got — I was telling Snerdley today, he got tons of reaction from people who didn’t know that we had an app. There were some people who were subscribers at RushLimbaugh.com who didn’t know we had an app and they were ecstatic and excited, they downloaded it and they thought it was great.

And David said to me, “See? You really don’t do enough self-promotion.” And I said, “That’s because it makes me nervous.” But he said, “No, these are people that already listen to you and you are offering them an additional service and an easier way to follow what happens on your program.” He’s exactly right.

So let me run through this again, because we’ve redesigned the app. It is just the best. It is sharp. It is functional. It has been streamlined. It no longer looks like some pennysaver newspaper that you find on the sidewalk outside a 7-Eleven. I mean, it really is top drawer. And I got an email yesterday from somebody who wanted to know if you have to be a subscriber, in other words, do you have to be a paid member to use the app. And you don’t.

The app has all kinds of things that are free. And you know what the biggest one is to me? You may disagree once you get the app. The app is free, you download it. The transcripts of everything I say are available every day and in an archive. And everything is sharable. There’s now a share sheet where you can message, you can message text or links, you can email them.

The things I say here, the monologs and comments are transcribed, and those transcriptions are preserved, both on the website and in the app. And it is in that way that what I say ends up being written or published. And you can reference that day’s transcripts, and if you heard something you really like and you want to share it with somebody, you can. You can search the archive that goes way, way back. You can keyword search. In addition to the transcripts of everything said on the program, there are backup sources and links that I use to create what I said, the facts and so forth.

And, as I say, all of this can be shared. Social media sharing, email, messages, what have you. So whatever you find that’s especially likable or brilliant that you want to pass on, it’s easily shared. You can “favorite” your favorite transcripts within the app for future reference too so that you don’t have to find them constantly from the get-go each time.

Now, you don’t get the Dittocam, and you don’t get live audio streaming unless you become a member, but you do get a free video-on-demand channel. We’ve started posting some short Dittocam clips for nonmembers, and there’s an extensive archive of TV appearances, my old television show from 1992 to 1996. It goes back years. And that’s all free and sharable.

And we’ve added AirPlay to the app so that if you have Apple TV and you’re watching your iPad, something on video, you can throw it onto your Apple TV with AirPlay, which is really cool. And, again, this is all free stuff. And then there’s a station finder. Now, the station finder works two ways. You can search by city, or you can use the location services if you have them turned on. You can ask for stations nearby your current location that are carrying the Rush Limbaugh program.

And there are gonna be frequent updates to the app as it goes on. And it’s simply RushLimbaugh.com. The fast way to find it now is to go to the search icon on your iPhone in the App Store, and you’ll see Rush Limbaugh, just tap on it and it will take you right to the app. And of course there’s even more if you want to become a member. But that’s optional. There is no requirement that you pay anything. And the great thing about it, you know, people say “Rush, you say a lot of stuff, but it’s gone, it’s in the ether once you say it.” Yeah, but it’s transcribed, folks.

Think of it as a massive number of columns or blog posts published each day after the program’s over. We also have — you know, everybody talks about podcasts. We were the first to do podcasts. We’ve been doing podcasts for I don’t know how many years. Now, that’s on the member side too. But the podcasts are available 30 minutes after the program ends every day, and they are each hour of the program, each hour is a podcast and they’re commercial free. And you can get them on iTunes, you can get ’em directly from the RushLimbaugh.com website. But we’ve been trendsetting here for I can’t tell you. Everybody’s getting into the podcasts now.

Now, the podcast is not a separate thing, it’s just a recording of the radio program, but that’s the best I have to offer. So all of these things are there and optional. Again, the Dittocam and the audio, video streaming, you have to be a member for that, but, as I say, it’s totally optional.

The amount of information is encyclopedic that is free on the brand-new RushLimbaugh.com app. And it’s one of the best looking apps. It’s been redesigned, and it’s really, really sharp, and it’s taken the App Store by storm. I’m ecstatic about it. I owe the gratitude to all of you who are downloading it and learning to use it. And my brother said, “You need to talk about this more because you never do and people don’t know.” So he’s right. He’s right. And that’s it for today.

RUSH: Now, I was in the process of saying something when the program ended one minute early in the last hour. And it was something important. It was a follow-up on the new app. And it’s not gonna take long, folks. Bear with me. You know, people tell me — and this isn’t news — people say, “Rush, you need to do more than radio. I mean, there’s so much more you could be doing. You need to be on TV.”

“And, Rush, you need to write newspaper columns. What you say needs to be written down. I mean, there’s all kinds of websites that would love to take you, blog posts, magazines. Rush, you need to start a blog on your website. Rush, you need to –” da-da-da-da. “Rush, you should do a podcast.” We were the first to do podcasts. We were among the first. We are the technological leaders in all of broadcasting.

I’ve been using the internet since before it existed to communicate with listeners and to acquire information, do show prep and so forth. With one radio program, we have blog posts and the equivalent of newspaper columns, and here’s why. Everything I say is transcribed. Now, if you visit RushLimbaugh.com, the website, you know this. But now with the new app, everything I say is transcribed. Therefore, written down. This program produces encyclopedic quantity and quality every day. 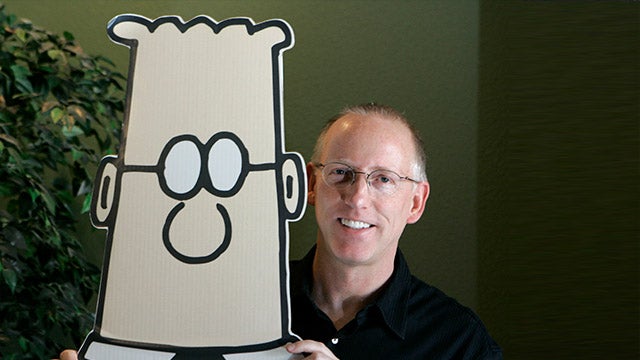 For example, yesterday I cited some work by the Dilbert cartoonist, Scott Adams. Well, if Scott Adams had the app, he could find out what I said, he could share it to himself on his app, and then tweet it out to his followers. You can take anything you hear that I say, it’s now written down. I don’t have to do a blog post. I already do it. I don’t have to write a column; I do it, every day, three hours a day. What happens on this radio show gets converted into all of those formats, television with the Dittocam, podcasts of the radio show without commercials.

All of the transcripts equal — talk about blog posts, columns. It would be like writing five a day. And every one of them you can access and see, and if you particularly like it, share it to all your friends, spread the word, all from the app. And all of that is on the free side. Same thing at the website, RushLimbaugh.com.