THE PRESIDENT: The cutting of the regulations was every bit as important as what we did with the tax cuts. But you put ’em both together, and we have a dynamic country again. I mean, everybody’s talking. I just came out and some really wonderful people said, “Davos has never been like this.” This is like walking into the Academy Awards, except we have more photographers.

RUSH: “We have more… It’s just like Academy Awards. The Academy Awards? That’s nothing compared to when I come to Davos. Look at all the photographers out there.” In case you missed it, the head honcho — the founder — of the World Economic Forum actually defended Trump against media attacks and said that Trump was right to react the way he did, and it was unfair for the media to be treating him the way they are (I’m paraphrasing) and this caused Jim Acosta at CNN to have a meltdown. 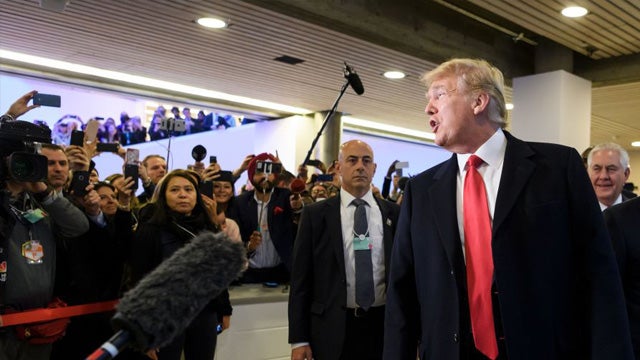 And we’ve had Christiane Amanpour and Jim Acosta and there’s somebody else just not believing what they’ve seen. And I’m tell, folks, they’re actually being truthful. Christiane Amanpour actually said (summarized), “Trumpets? We’ve had trumpets? We’ve trumpet fanfare, we have a trumpet orchestra. We’ve had — we’ve had parties. We’ve had celebration. We’re never, never had this with Obama.” Of course, Obama never showed up. “But we never, we never had this with Clinton!”

I wonder why they’re having it with Trump? And she said… You could just hear in her voice the begrudging acknowledgment that it was the tax cuts and the resulting booming economy that had them all excited at Davos. For those of us on this side of the aisle, do you see how simple this has been and how frustrated we’ve been with eight years of Obama and the Democrats summarily rejecting this kind of thing? The fact that this is what happens after major tax cuts is not a surprise to us, is it, folks?