Hillary: Women Will Bear the Brunt of Climate Change

RUSH: “Hillary Clinton Predicts Women Will ‘Bear the Brunt’ of Climate Change.”  Okay, now, to you and me, this is preposterous.  This is literally insane, that climate change has any way of knowing who it’s going to hurt most.  This is all part of a long-existing media meme: “Women and children hardest hit.  Women and minorities hardest hit.  Women and the poor hardest hit.” It’s something to be pasted into every story of disaster, every story of damage. 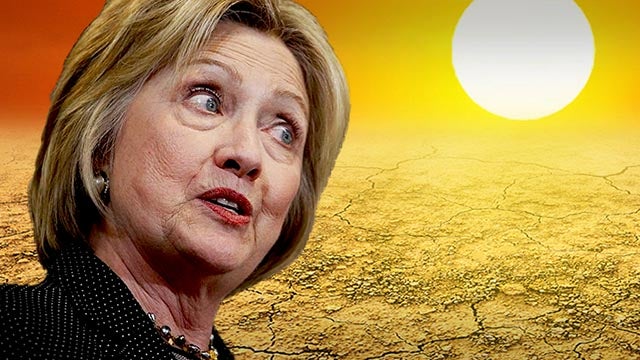 “Such migration won’t be led by men, she maintained, but rather by women ‘when all of the grass is finally gone as the desertification moves south and you have to keep moving your livestock or your crops are no longer growing.'” (laughing) Now, what is she talking about?  This woman wouldn’t know a farm if an alien snatched her up and deposited her on one!  What is it…? Let me read this again.  In fact, we have a sound bite.  The sound bite… Yeah, we have it.  This is actually her saying this at Georgetown University yesterday…

HILLARY: They will bear the brunt of looking for the food, looking for the firewood, uh, looking for the place to migrate to when all of the grass is finally gone as the, uhh, desertification moves south and you have to keep moving your livestock or your crops are no longer growing; they’re burning up in the, uh, intense heat that we’re now seeing, uh, reported across North Africa, into the Middle East, and into India.  So, yes, women once again will be primarily burdened with the problems of climate change.

RUSH: I’m at a loss to how to deal with this in any meaningfully different way than I have been dealing with.  This is insane.  This is moronic.  In the first place, the climate change predictors tell us it’s 30 to 50 years away and that we have to act now if we’re to have a chance at preventing it.  They’re not telling us it’s happening now.  They try to claim we’re in a warming period but that the warming is not… This is never going to happen in our lifetimes.

If that happens, it will blow their whole plan.  It cannot happen in our lifetimes, because it isn’t happening.  Therefore, they never predict it to happen our lifetimes because that way they would be proven wrong.  They’ll never predict it within 30 to 50 years.  It’s always that or a little longer.  But they can’t… Now, they’re getting caught up in their own passion, because whenever they think there is, shall we say, an extraordinarily hot week, “Why, it must be climate change!”

And they point to it. But the rejoinder is, “Wait a minute.  You people yourselves say that this isn’t gonna happen for 30 to 40 years and in some cases the worst isn’t gonna happen until 2100.”  But… (laughing) The Sahara Desert is already a desert, Hillary! (laughing) There aren’t any crops in the Sahara Desert.  It is already… (laughing) She said, “[T]hey’re burning up in the intense heat that we’re now seeing reported across North Africa.”  North Africa, aside from cities on the coastal shelf there in the Mediterranean, it’s the Sahara Desert!

It’s already a desert.  “…into the Middle East and into India.”  So now climate change is happening.  I guess the forecast predictions for years out are off the books now. (interruption) Oh, it is.  It’s happening everywhere.  It’s happening here, it’s happening everywhere — and you can’t judge freezing cold weather as a sign that it isn’t getting warmer, they say. That’s stupid!  My tech bloggers, they say it’s stupid.  You can’t take subzero-day after day after day and say that it doesn’t mean the climate is getting warmer — and people that do that are stupid and don’t know the science.  If it’s cold… (interruption)

Well, if it’s cold and freezing abnormally below normal cold does not mean that climate change, global warming is not happening.  Anyway, look, there’s so many ways to cut this to shreds.  “Women will bear the brunt of looking for the food.” Notice this apocalyptic picture.  She’s talking to people that are being charged $30,000 to $50,000 a year to attend Georgetown University, their parents are scrimping and scraping, coming up with that money to send them there, and this is the kind of apocalyptic instruction that they’re getting.

And here is Hillary Clinton, a presidential candidate, who has… I don’t think she means this for a minute.  I can’t believe that even a reasonably intelligent person actually believes this.  I have to think they know that they are promulgating a scam.  It defies intellectual acuity to believe that this scenario is going to happen.  “They will bear the brunt of looking for the food.”  She’s on college campus, and she’s trying to mobilize a bunch of college-age women to become her army, and they’re using fear and fright and fatalism.

“Women will bear the brunt of looking for the food, looking for the firewood.”  Of course, see, there won’t be any furnaces.  Why would you need firewood if it’s this damn hot?  If it’s this hot that crops won’t grow — if it’s this hot that the Sahara Desert is becoming an even bigger desert, if the grass is gone because of the burning heat, if North America is becoming a desert — why would you need firewood?  Cooking?  You won’t have any food because the crops are gone.

The crops have literally been burned away! That’s why you’re migrating to the south.  Then what happens when you get to the Gulf of Mexico?  Are women then gonna have to build the ships on which everybody boards and heads wherever to stay ahead of the desertification of North America?  And where are the men?  Are the men to be left behind because they have already proven themselves to be utterly and totally worthless when it comes to survival?

Can Hillary and the women not get them out of their man caves to even help?  Are they still using shortwave radios to try to find NFL broadcasts while in their man caves, and they refuse to come out and help the women and children survive?  Men are that selfish, that lazy, and that ambivalent about this? (interruption) Oh, no, they’re gonna be doing something if they’re not watching NFL broadcasts by then.  Of course, the NFL probably won’t be playing because it would be too hot to play; the players would literally expire.

I mean, if the desertification’s going on out there. Unless everybody’s in a domed stadium, but then you’re gonna have to air-condition the place, and that causes climate change. So you gotta turn off the air-conditioning. But then there isn’t gonna be anybody at home to watch ’cause there’s not gonna be any homes because it’s becoming a desert and people are migrating to the Gulf of Mexico in order to stay alive, but the men are not helping.

And there are women in this audience that are eating this up. They’re buying into it full-fledged, hook, line, and sinker. Play the bite again. I want you to listen to this. You know, I have to dissect this the way I — we laugh at it. We’ve proven that laughing at it is the wrong way to go, but we have laughed at it, we have fun; but it’s not going to change anybody’s opinion of it. They’ve been saying crazy stuff like this for 30 years and we’ve been laughing at it for 25 years. We find out to our utter shock and dismay that the left believes this stuff! Here it is again.

HILLARY: They will bear the brunt of looking for the food, looking for the firewood, uh, looking for the place to migrate to when all of the grass is finally gone as the, uhh, desertification moves south and you have to keep moving your livestock or your crops are no longer growing; they’re burning up in the, uh, intense heat that we’re now seeing, uh, reported across North Africa, into the Middle East, and into India. So, yes, women once again will be primarily burdened with the problems of climate change.

RUSH: She was asked about the impacts of climate change on women. She actually got the question. There was some woman in this audience of students that literally asked her, and that’s the answer she came up with. Can you believe this? Even those of you who believe in climate change, don’t tell me you believe this! That you’re gonna be migrating because New York and Illinois and Montana are gonna be deserts, and you’re all gonna be dressed up like farm women, and you’re gonna be driving the herd down south, and the herd’s gonna die because the intense heat, the grass is gonna burn up.

The men are nowhere to be found because they’re worthless to begin with. The women gotta find the firewood. The women gotta find the food. There’s no crops. You really buy this? So, yes, women once again will be primarily burdened. The lengths to which these literal idiots go to promulgate the idea that women are being discriminated against is mind-boggling. All of this is said in service of the idea that women remain discriminated against and unappreciated. And yet the burden of survival and life always falls to women, but they are never appreciated for it, and they’re never compensated for it.

I swear. I want to see the movie! I want Tom Steyer to get — I want this movie on Netflix. It can be a double feature with The Handmaid’s Tale part 2. Because part of this also is that the women are being made to dress up like milkmaids. They have to wear chastity belts. They’re only permitted sex with men who don’t want to become fathers. 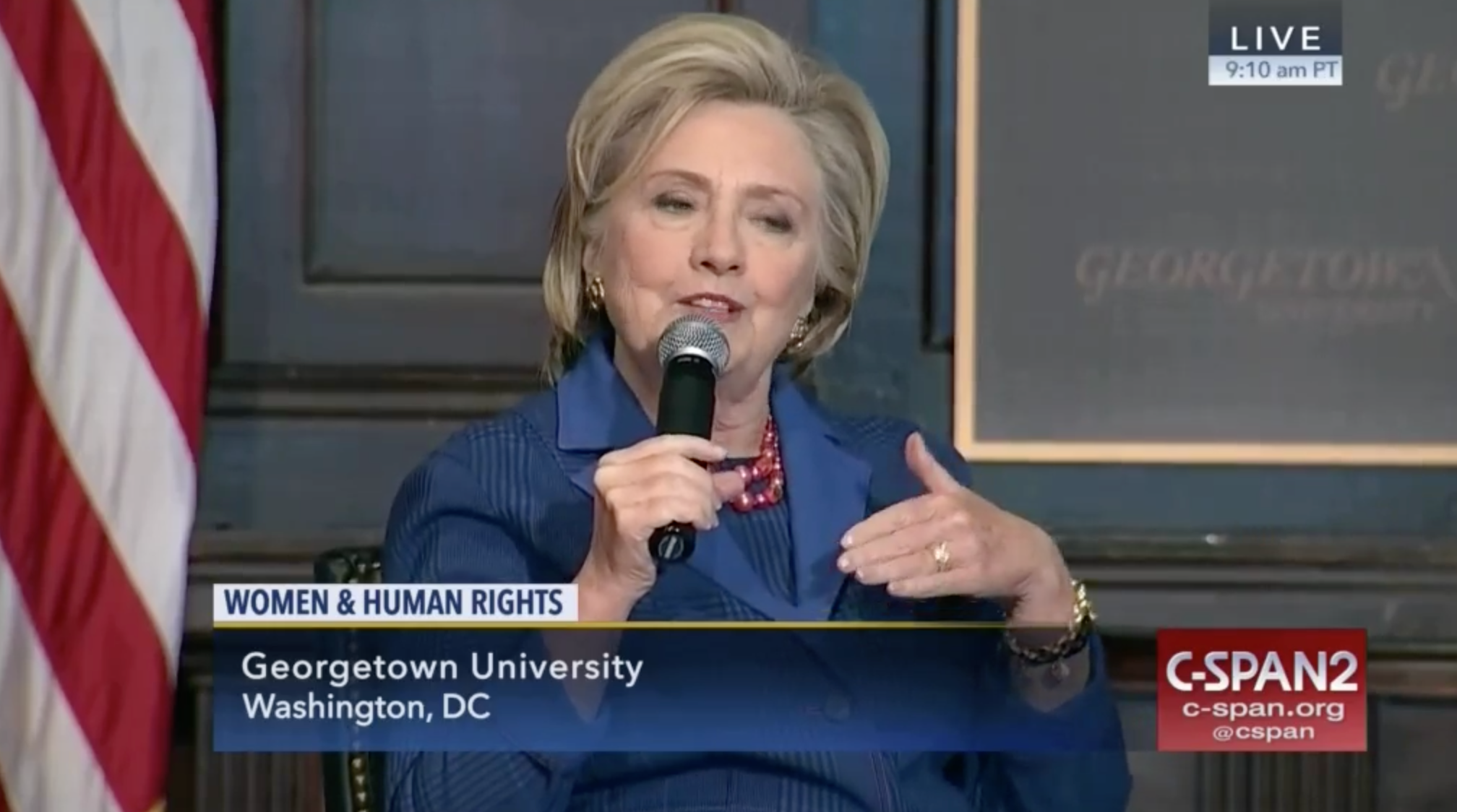 All of this is gonna happen on the cattle drive, and the men only show up for sex, and then they vanish and go back to wherever they are when the women are carrying this lonely burden. Georgetown University! A lecture from the Democrat candidate for president. And people wonder why this woman lost? And people wonder why this woman was defeated. Really?

I’m trying to dial it back a little here, folks, so as not to scare. It’s been pointed out to me that people that listen to NPR could think you’re yelling if you just speak like this. Yep, the migration will not be led by men. The Georgetown Institute for Women, Peace, and Security is where this grand lecture took place. She said, “I mean, I think everyone has to purge themselves of prejudicial thoughts, of worries about who’s on top and who isn’t in the world, as it is today.”

“When asked how she would handle the ‘backlash’ against women, Clinton said some people react negatively to feminism and women’s rights because they feel ‘insecure’ or ‘frightened’ by those women.”

Where is the backlash against women? Is there one? Am I missing it?