RUSH: One other point that I need to make on this Jane Mayer 15,000-word piece. If you’re just joining us, the left has decided they need to rehabilitate Christopher Steele, and the effort has begun with a 15,000-word article in The New Yorker by Jane Mayer, who has written books trying to do great damage to Clarence Thomas. She has tried to do great damage to the TV show 24 and its creators for inspiring torture at Club Gitmo and Abu Ghraib. She also did a seek-and-destroy book on the Koch brothers. And now she’s out with this massive article rehabbing Christopher Steele. 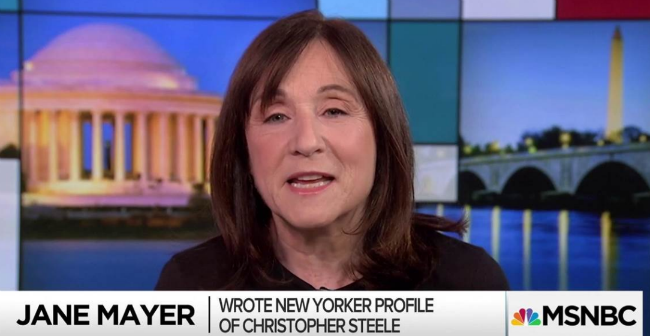 And she makes an assertion in this story that Donald Trump wanted Mitt Romney as his secretary of state but that Vladimir Putin put the kibosh on it because Putin has blackmailable data on Trump. In other words, she is claiming that Trump is essentially a sleeper agent for Putin, for Russia. Or that he is under Putin’s thumb. That Putin helped Trump get elected, Putin has blackmailable information, and that Putin didn’t want Romney anywhere near the secretary of state position. As though Trump was ever gonna pick Romney. But, anyway, that’s beside the point.

The way to kind of nuke this, the story lays claim to the fact that Putin’s real concern with Romney was that he was going to slap sanctions on Ukraine and other related Russian satellites and that Putin wanted no part of that. And so Putin insisted that Trump not put Romney in that position so as to avoid these sanctions.

Well, okay. Let’s look at Trump administration policy in that regard. Are you aware that Donald Trump has kept the Russian sanctions over what they did in Ukraine? Trump has not lifted the sanctions on Russia over Putin’s mistreatment of Ukraine. The sanctions are still there and Romney was never secretary of state. So if the story is true that Putin nixed Romney because he didn’t want any sanctions on Russia over Ukraine, then why are there still sanctions, and why hasn’t Putin released the blackmailable information on Trump? 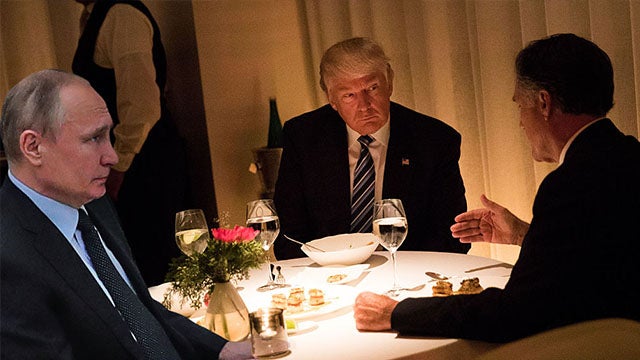 So this Jane Mayer piece gets heralded and celebrated all throughout the Drive-By Media. And a bunch of sponges all over the country soak it up and believe it to be true. It won’t be long before you’re gonna be able to take your camera out on the street and ask your average, ordinary college educated Millennial, “Do you think Trump did not name Romney because Putin warned him not to?”

“Oh, yeah. Absolutely. I saw it in the news.” Without any stopping to literally, critically think about it.

RUSH: Ralph’s in Tampa. Welcome to the program, sir. Hello.

CALLER: I’ve been listening since 2006. I had the pleasure of meeting you in 2008, and I’ve been raising two Rush Babies ever since. And I can’t tell you how much I want to thank you for everything you do for me, for our country.

CALLER: Yes, sir. Well, I was calling to see if you had the opportunity to watch this two-hour special on The History Channel called America’s Greatest Threat: Vladimir Putin.

CALLER: Well, I think they did a pretty good job of tying the two together. I turned this on with the intent of really getting to know Vladimir Putin, why he was our enemy number one. And within the first 15 minutes I just couldn’t believe it, but they had done a really good job of tying the entire election of Donald Trump to Putin. And at this point my wife kind of gave me one of these, “Oh, no” type deals. She knew I was gonna throw something at the TV, but I decided to stick with it and bear through for two reasons.

One, I really was interested to see who Vladimir Putin was and what made him tick; but, two, I figure you’re a busy guy and I was gonna try to do some show prep for you. So the next hour they did a really good job of identifying Putin and who he was, how he was raised, and kind of what made him tick. And then the last half hour they really brought it full circle, went back to the foreign intelligence and ex-employees of the intelligence agencies and they really tried to bring it back to Putin and Trump and the whole conspiracy theory that’s being pushed by the mainstream media. And I really had eight main takeaways from this. And if you have a second —

RUSH: I don’t have time for eight, but give me a couple.

CALLER: Yeah. They did a really good job of showing Bush W. after 9/11 and Trump and really showing them as friends of Putin, and I thought through innuendo they really did a stellar job of tying the Republican Party to Putin and Putin to the Republican Party. And unfortunately —

RUSH: Well, wait a minute, now, that happened. Bush invited Putin to a Texas barbecue in Texas, and Putin apparently had never eaten food like that. When it was over, he said, “I’ve never felt this way after eating. Can’t believe what they eat here.” He was not appreciative. Meanwhile, Bush said, “I think I saw the man’s soul.” So Bush wanted people to think that he had a good working relationship with Putin. That was not made up.

CALLER: No, no. Yeah. Yeah, they showed that twice, I believe, through that one hour. But really the innuendo was that Putin was a man who had great ability to trick humans and this was his KGB gift and the Republicans fall for it every time. And they went right from Bush to Trump and said this is why Trump has befriended him and Putin knew that he could do this to Trump and this is exactly why he wanted Trump to be president. He couldn’t fool Hillary. Hillary was too strong.

RUSH: This show actually said that?

CALLER: They did say that.

RUSH: This show said that Putin didn’t want Hillary ’cause she’s too strong?

CALLER: She was too strong. And again, the innuendo was always dumb Republicans, smart liberals.

RUSH: Yeah. Well, I mean, how do you want to combat that? The History Channel? The History Channel? None of that is history, and none of that is accurate. Here’s the thing, folks. I get so tired of having to repeat this. Vladimir Putin doesn’t really care who wins presidential elections. To portray Putin as that in the weeds with all this is to really misunderstand him.

If the Russians had their way, the Soviets, communists, they would wipe out religion, particularly Christianity, and they would totally take over American education. And in some people’s minds, they’ve succeeded in both. Saul Alinsky, all these community organizers, they’re all communists, folks. The Republicans are the bulwark and the lone opposition to all of that. They’re not complicit in it whatsoever.

But that show, if you’ve accurately described it, it’s just more propaganda, and it’s designed — the media got together with the Democrats, and they created a narrative shortly after Trump won that his election was illegitimate, just like they did with George W. Bush in 2001, after the Florida recount. Presidency, illegitimate. Bush cheated, Florida Supreme Court recount was stopped by the U.S. Supreme Court, Gore should have won, therefore everything Bush does is illegitimate thereafter.

It’s the same thing with Trump. Hillary should have won. Russians stole the election from her. It’s a pattern, it’s a theme, it’s a playbook page that the Democrats run. And they all pick it up. This is the value they have in owning pop culture. All it took is one week of “Trump stole election working with the Russians,” establish that mind-set, then run all these stories with supposed sources, anonymous sources, the intel community for a year and a half.

And then other places like the History Channel pick up and run ostensibly a profile of Vladimir Putin, which is really nothing more than a vehicle to show why Putin was really afraid of Hillary and feels much better with Trump in the White House, which just establishes further the original narrative here that Trump stole the election working with Putin.

So none of what you say when I stop and hear you say it, think about it, surprises me. I still remain surprised that this has been so easy a sale with the American people. But then that just dovetails, zeros back on what a pitiful condition American education is in and how easy it is to indoctrinate when you have succeeded in teaching people how not to think. I appreciate the call, Ralph. Thanks much.