History Professor on California and the Civil War

CALLER: I wanted to start out with one personal note. I’ve been listening to you since about 1990. My mother introduced me to you when I came back from the Gulf War, and she always compared you to my grandfather, who was one of the early conservative radio commentators, a guy named Fulton Lewis Jr.

RUSH: (chuckles) Is that right!

CALLER: When I talk to you, I feel like I’m talking to my family. 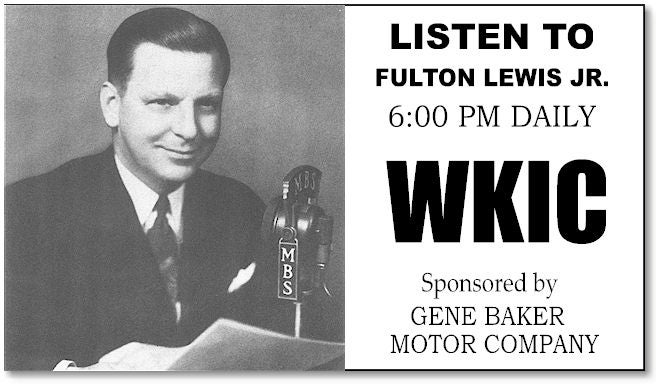 CALLER: She loved you. She died about 12 years ago, but she listened to you religiously.

RUSH: Well, you know, you yourself it sounds to me… Even though I’m deaf, the way I’m hooked up here, it’s reasonably good, and you to me sound like you have a broadcaster-type —

RUSH: — potential in your voice.

CALLER: I have the gift for gab, but I (laughing) don’t think I could compare to anyone like you, sir.

RUSH: Well, it’s great that you’re there. I’m flattered you’ve been part of the audience for so long. It blows me away. It really does. Thank you.

CALLER: Well, I’m a retired Marine and I’m a part-time history professor and rancher now, and I wanted to expand on the point that you made, ’cause I think it naturally is a brilliant point, and that’s a comparison between what’s going on here in California and what happened really in the 1850s on the eve of the Civil War. A lot of people don’t recognize that the spark that really caused secession by the Confederate states was the election of Lincoln. They hated Lincoln so much that they refused to be in the same country that he ruled. And you see the same thing now since the election in 2016. Whether it’s judges or states, everyone on the left has done their utmost to delegitimize Trump, and now that they’ve failed to do that, they’re beginning to defy him.

RUSH: The judges are defying. California is defying. The governor of California, the mayor of Oakland, some other state officials are in utter defiance of Trump, as is much of the left. And, you’re right; there was defiance of Lincoln as well among some states after he was elected. You know, for those of you that do not know or may disagree with this, Abraham Lincoln had to sneak into Washington, D.C., for his inauguration. Abraham Lincoln had to travel on a train from Illinois with just one compatriot.

And he was dressed in a complete, total disguise, in order to get there alive. And it was the Pinkerton Agency back then that actually became… Well, I don’t know if it still exists as a security force, but Lincoln’s experiences are what gave birth to much of presidential security today, because he literally was, by his enemies, reviled and despised, like Trump is. So I’ll give you that analogy. That one holds water. That’s good. What else? 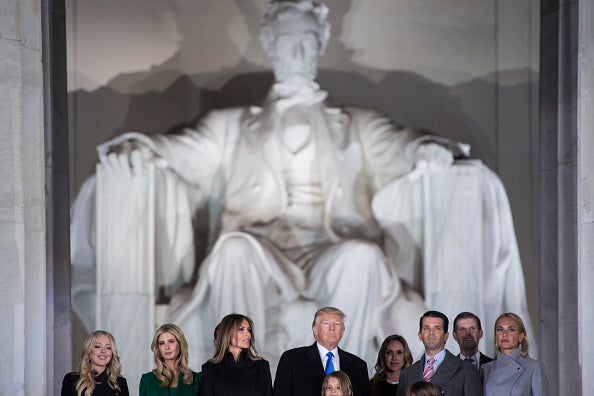 CALLER: Well, the other comparison is the hubris that you have in California. When you had this millionaire up in San Jose that has drawn up a ballot measure to have California secede from the United States, one of the justifications he puts in there that California brings in so much money to the national economy. That was the same argument that the planter class made in the South, because prior to the nineteen-teens, the primary source of income for the federal government was tariffs, and was trade.

So the cotton trade generated the vast majority of income for the federal government. That’s the same argument that the liberals up in San Jose and San Francisco are making, that, you know, the United States needs California more than California needs the United States. I think, you know, obviously the biggest mistake they’re making is the fact that… In my opinion the biggest mistake they’re making is they think the rest of us are gonna go along with this, that the rest of the state is.

RUSH: Well, now, wait a second. They’re not only thinking that. They’re thinking that… Look, there has been no other president that lifted a finger to stop them. Obama encouraged them. The Bush administration was all for granting amnesty.

RUSH: There has been no opposition to the sanctuaries movement until now.

RUSH: They’ve gotten used to people not caring about it, not stopping them. Now here comes somebody that wants to stop ’em, and look at the… I mean, the attraction they’re having is childlike immaturity. They can’t believe it. “How dare he!” and so forth. The similarities to me are eerie. That’s why I made the analogy in the beginning hour — and yours are great add-ons, I have to admit.

CALLER: Well, the other thing that a lot of people forget is when the South seceded, there were multiple votes that were taken, and not everybody in the South wanted to secede, just like not everybody in California is a nut job like they are up in San Francisco. You know, West Virginia broke away from Virginia because they did not agree with — they had no interest in — slavery up there. They had no interest in breaking away from the union. And the other movement that you’re starting to hear more and more about in California is dividing the state. You know, let San Francisco be itself, let Los Angeles be itself, and divide the rest of the state up.

RUSH: Really. Wait a minute? Three entities, California by itself, San Francisco by itself, and then the rest of the state would be…” So you take California into three states is what you say the movement is?

CALLER: Well, you know, personally if I had my way (chuckling), I’d divide it up into about six. But you have the State of Jefferson movement which has been going on for years up in Northern California. I’m not sure on the numbers, but I believe it’s about 27 counties. But they have one state senator that represents them, so they’re not equal represented in Sacramento.

CALLER: The greater Los Angeles area and the greater San Francisco area have the vast majority of the representatives. 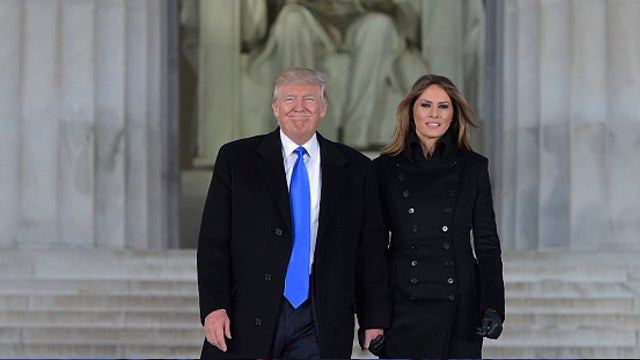 CALLER: Breaking the state up.

CALLER: It’s already in the state constitution. When the state was established in 1850, it was written into the state constitution that it could be divided into two states. If I recall, the federal rules for making a state is the state legislature has to been willing to go along with it, and then it has to be approved by Congress. West Virginia became a state because they are argued that the Virginia state assembly was illegitimate since they weren’t following federal law. I could make that same argument now. Sacramento’s not following state law. I would say, you know, obviously the United States is never gonna allow California to secede from the union. I just don’t see that.

RUSH: See, that’s the bottom line. They can’t; they won’t. Just like they didn’t permit the Southern states to secede, it will not be permitted.

What’s fascinating to me is the attitude of the people in California who want to do it.

RUSH: Totally. Totally. It’s like a childish tantrum in reaction to a guy being elected president they don’t care about.

CALLER: Well, the other thing that concerns me is if you jump your analogy of, you know, from the Civil War to Reconstruction. After the Civil War, Reconstruction, you had a period of time from 1865 to 1876, it was an effort to, you know, since slavery had been ended, it was an effort to basically change the entire social structure of the south. You had routinely congressmen and senators from the former Confederate states that were not seated by the House of Representatives or by the U.S. Senate.

And that brings me to my next point. It’s kind of a warning, I would say, to the rest of the 49 states. The only hope for California, in my opinion, is that either it hits rock bottom and the other 49 states stage an intervention or it breaks up. But in April in about three weeks there’s a court order that mandates that everybody that registers for a driver’s license will be registered to vote. Now, that includes illegal aliens in California. California already issues driver’s licenses.

RUSH: Well aware of that.

CALLER: How is that gonna affect, since we have 42 congressmen, how is that gonna affect the votes of the other citizens in the 49 states? ‘Cause there’s no proof at that point, if everybody’s being registered, there’s absolutely no proof that the state of California is following federal election laws. And obviously Becerra and the secretary of state, they’re not gonna investigate it. You know, I think you’re gonna get to another constitutional crisis. I honestly hope we do, unless California is willing to prove that they are not allowing illegals to vote in federal elections. I hope Congress says, “Sorry. We will not seat your representatives.”

RUSH: The whole reason for letting them register with a driver’s license is so they can vote in these elections. California is not gonna expose this as something that’s incorrect, illegal. This is what they intend. Anyway, before you go, I’ve got time for one more question for you and then I’m up against it on time. What are the odds that California bottoms out? You said that’s one of the possibilities here, but what are the real odds of that?

CALLER: I think it’s probably 60% or better. You know, everything that I’ve heard is, you know, they cook the books to make it look like the CalPERS and CalSTRS accounts are in black, but everything I’ve read says that they’re not.

RUSH: There’s no way. These are the two pension plans. There’s no way. The unfunded liabilities alone. There’s no way PERS and STRS are in the black. (laughing) But when you get to the actual point where it would actually happen, California imploding economically and financially, I always thought, frankly, I was wrong, I thought Obama would bail him out as one of his acts as president. That’s how bad it is in California.

You don’t see it because most people who’ve never been there see California as two places, maybe three. Hollywood, LA, San Francisco, and San Diego. And they don’t see anything else. The disparity of economic circumstances, the variants of the different income levels, it’s obscene. The Democrats, they run around and they talk about the rich have all the money and the poor don’t have any. The wealth gap.