Show Us Your Evidence, Pencil Neck

RUSH: The Democrats have a golden opportunity. Pencil Neck has a golden opportunity. The House Intelligence Committee… The Republicans run the committee; Devin Nunes is the chairman. They announce as a committee — with the Democrats dissenting, but they announce — that the committee is closing its investigation of the Trump-Russia collusion story because after 73 witnesses and 300,000 hours, pages, whatever the hell else, they haven’t got a shred of evidence.

Do you realize what a golden opportunity this is for Pencil Neck? (interruption) Why you shaking your head? All he’s gotta do is find one shred of evidence, and he’s blown them all out of the water! This with the Republican committee, the chairman making it official. They have shut down the investigation; it’s over because there’s nothing. They’ve interviewed 73 people. They’ve had this many hours, all this. They have failed to unearth a shred of evidence. Now, let me put this in perspective.

Despite a year of daily, numerous stories with anonymous sources from the intelligence community — foreign and domestic, deep state. Every day, the New York Times had one. Every day, the Washington Post had one. Every day, CNN talked about their own and in the newspaper, for a year! For an entire year. Remember all of the stories that led readers to believe that there had been collusion, despite a secret line in every story, “To date, no evidence has been found, but experts say it’s only a matter of time” or what have you.

So here comes Devin Nunes and the House Republicans shutting down the investigation, claiming. “There’s no reason to keep looking. We haven’t found anything.” All the Democrats have to do is find one bit of evidence. Do you realize the major political win and victory that could be? And yet they can’t! They can’t find a morsel. They can’t find anything. Now, despite what you may think, the House Intelligence Committee does not have trousers and the time that, say, Mueller has.

“What do you mean, Rush? The House committee’s big and Mueller’s only got 16…” Yeah, but Mueller’s got an unlimited about that be budget, and that’s all he’s doing. The House Intelligence Committee works at the same time other committees are working and the House is in order. It’s not the only thing that the House of Representatives is doing, but Mueller isn’t gonna find anything anyway. In fact… Let me see if I have this on top here. What Mueller has announced… Yeah. Get this. “Mueller Weighs Putting off Trump Obstruction Decision —

“Special Counsel Robert Mueller’s investigation into whether President Donald Trump obstructed justice is said to be close to completion, but he may set it aside while he finishes other key parts of his probe, such as possible collusion and the hacking of Democrats…” Now, why do we know this? How do we know? It means… (interruption) Yes, Mueller’s team leaking. Hell, it may be Mueller himself for all we know. But Mueller’s team is leaking. It’s the only way that… Bloomberg is reporting.

So this is the fallback.

So why announce this?

What is there to gain by leaking that they’re gonna delay the obstruction decision? My guess is… Well, look. What the story says here is, “Mueller may calculate that if he tries to bring charges in the obstruction case … witnesses may become less cooperative in other parts of the probe, or the president may move to shut it down altogether.” So they’re leaking that they’re doing this because if they bring charges now and it hits very close to Trump personally, then witnesses are gonna become less cooperative.

Everybody in Washington has their eggs in one basket now, folks, and that’s impeaching Trump! So the eggs in one basket are really about the Democrats taking control of the House in the November elections. That is what is on the plate. That is what the agenda is. And I think in service to that, they leak that they’re going to delay the obstruction charges while they continue to probe on collusion. But the problem is, there isn’t a crime that anybody has found here.

There isn’t a crime that Mueller was charged with investigating. They’ve got nothing. Nobody has anything, particularly on Trump, and I think Devin Nunes and the House Republican’s decision to shut down their investigation… I find it fascinating, because on one hand, it’s a huge roll of the dice. On the other hand, it’s pure common sense, and it makes all the sense in the world to boot because there isn’t any and it’s time to end this charade. It’s time to throw down this façade!

It’s time to get rid of this dog-and-pony show and get back to reality, which is what the House Intelligence Committee is doing. My point is, what a golden opportunity for Pencil Neck here. Pencil Neck’s been running around telling everybody that they’re close, right? He’s been running around for years saying, “We’re on the verge! We don’t have any evidence yet, but that’s because witnesses aren’t cooperating. That’s because we don’t know what we’re hearing. We don’t know what’s true or not. We need continue our investigation,” all this slap-happy gobbledygook. But what a golden political opportunity for Schiff!

Because now the Republicans are on record as saying, “There isn’t any evidence of collusion between Trump and Russia, period.” So, Pencil Neck, find some — and if you find it, you own it. If you can find if and it’s provable and it’s incontrovertible, then you guys are gonna win everything. I think, in fact, it’s almost incumbent on Pencil Neck to now go find some. Since the House Republicans have officially proclaimed there isn’t any to be found. There isn’t any. I’m sure Pencil Neck’s having heart palpitations. 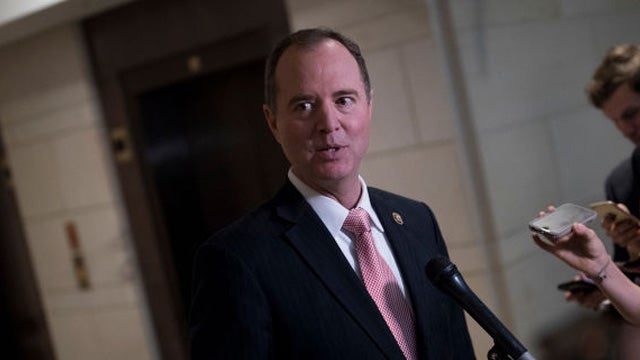 He’s probably going through a mixture of emotions about this, ’cause it could go one of two ways. It could totally shut him down and expose him for the fraud that he and the Democrats are, and he’s got that to worry about. On the other hand, he’s gotta be salivating over this piece of evidence that has to be there because everybody knows that Trump cheated; everybody knows that Trump colluded with Russia. Except they don’t know it because it didn’t happen.