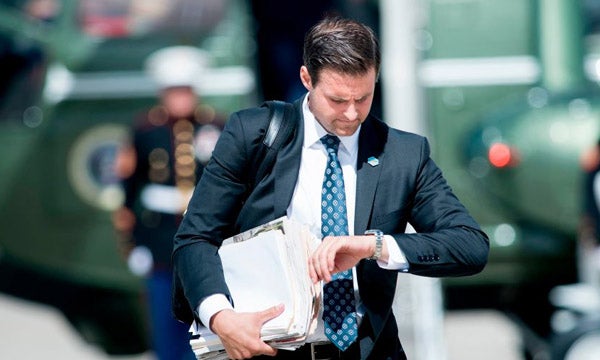 He was “one of the longest-serving aides to Mr. Trump, dating back to the earliest days of the campaign.” He was not allowed to clear out his desk or any belongings. They came and got him. They marched him out of the White House. John McEntee. So we never heard of Rob Porter, but we now know what he did. Do you know what this story says that John McEntee did? Let me read to you the very short paragraph.

“Mr. McEntee wasn’t as well known as the others, but had been a constant presence at Mr. Trump’s side for the past three years. He made sure Mr. Trump had markers to sign autographs,” i.e. he made sure Trump had Sharpies. “He delivered messages to him in the White House residence and, over the weekend, ensured that the clocks in the White House residence were adjusted for daylight-saving time.”

He was fired on Monday. That’s the job description?