Every Democrat Should Be Asked If They Agree with Miss Pathetic

RUSH: Yesterday, after the Hillary Clinton debacle in India, in Mumbai where she had the two slips coming down the steps and that stupid speech that she gave. We played the sound bites of Hillary’s speech yesterday, read some of it to you, in which she said that the reason white married women voted for Trump is because the men in their lives are telling them not to vote for Hillary. The women are afraid of their men. They’re bullied by their men. Their men and their bosses tell them what to do; the women are afraid to stand up for themselves. 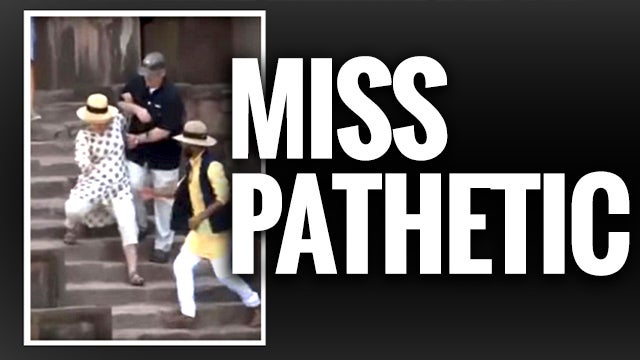 “Do you endorse what was said by such-and-such wacko over there?” They’re always put on the spot, even if they’ve never heard what the comments were. Well, it’s time to turn tail here and reverse things and start asking Democrats, “Do you support what Hillary said?” And here again… This is the second of three different stories today where I think we have evidence (Snerdley will back me up on this) that the Democrats are listening to this program and reacting to it. The big one…

The big one is the New York Times basically rephrasing my point about what the Tillerson firing really means in terms of Trump and his staffing and his administration and his agenda. It’s almost an exact copy of the point that I made yesterday rewritten in their own words. That’s coming up. But I asked that every Democrat be pinned down. “Do you agree with what Hillary Clinton said about white married women in America? Do you agree with Hillary as to the reason she lost the election?” They want to head that off at the pass. Here is Patti Solis Doyle. She’s on Headline News last night. She was Hillary’s campaign manager in 2016, and the question that was asked of Patti Solis Doyle, “This sounds really bad. I mean, what do you…? How are you all gonna deal with this? DOYLE: This is bad. You know, I can’t sugarcoat it. Uhhh, Democrats are gonna have to distance themselves from these remarks and distance themselves from her. It seems to me she’s still, y’know, struggling with coming to terms on how she lost and why she lost. Uhhh, which, you know, is human and normal, particularly this kind of level of loss. But I do wish she would stop doing it so publicly.

RUSH: Well, I’ll tell you, it’s obviously it’s affected her and she still hasn’t gotten over it — and I don’t think she ever will. If you put yourself in her shoes, when you’re in the middle of a slam dunk… I’m sure she believed like everybody else did in the Democrats in the media, “Okay, here’s Hillary. It’s her turn. She’s entitled to this.” In her world, by the way, she was born to be president. She was born to be. They told you that at Wellesley. She’s born to do this. She was born to be a political queen.

She had saved the Democrat Party from demolition by remaining with her husband and backing him up and defending him against all of his philandering and all the Lewinskys and the “back-alley Clintons” out there. She made it possible for him to remain in office, remain — made it possible for the Democrat Party now to be hers. She was owed. She felt entitled, and it was supposed to happen in 2008. But then Obama came along, and they abandoned her, and they cheated on her yet again, and they undermined her, and they gave the nomination to Obama.

They told her that this was her time. They even rigged the Democrat primary so that Crazy Bernie or anybody else didn’t have a chance. It was Hillary’s. It was her gift — and then the most amazing, wonderful thing happened: The Republicans chose Trump! Somebody against whom it would be impossible to lose. In their world, Donald Trump was the biggest SOB, the biggest ogre, the biggest boor to come around. It was a godsend! There was no way Donald Trump would ever be elected. So it was gonna happen.

Hillary Clinton was going to be in the Oval Office, and for two years she dreamed of it. She went to bed thinking about it. She got up thinking about it. She had measured the curtains all the way back in the nineties. She knew exactly what she was gonna do. It was just a matter of time. “Come on, calendar, keep moving! Faster, faster, faster. I want it! I want it! It’s mine.” Even at 8 o’clock on election night they thought it was a landslide win — and then we all know what happened.

The very life was sucked out of Hillary Clinton in one of the biggest royal screw jobs that had ever happened, something that was as close to a guarantee as there ever is in politics, and she still blew it. So, naturally, she can’t get over it — and naturally it can’t be her fault. So now we’ve got the Russians and Trump colluding and now we’ve got white married women who are nothing but a bunch of weak-minded bullies that are afraid to stand up to their men. She’s become a pathetic figure. A little montage here of Mrs. Clinton. Oops. I just saw the clock, but we have a montage of her blaming everybody but herself that we’ll get to when we get back.

RUSH: And here she is, Miss Pathetic, Hillary Clinton, a montage of her blaming everybody else for her defeat.

HILLARY: I inherit nothing from the Democratic Party. The tech revolution really weaponized. If you look at Facebook, news items posted were fake. The Russians … 1,000 Russian agents. The bots. Millions of bots. Citizens United. Then you’ve got Cambridge Analytica. The Mercers. Brexit. The Breitbart operation, Steve Bannon, Kellyanne Conway, the John Podesta emails, WikiLeaks, in bed with Guccifer, in bed with DCLeaks. That’s right. The conspiracy now, it’s a vast Russian conspiracy. Guys over in Macedonia. Go to Netflix.

Screeds against President Obama or me. You didn’t like black people getting rights. You don’t like women, you know, getting jobs. You don’t want to, you know, see that Indian-American succeeding more than you are. I was swimming against a historic tide. Media forces on the Republican side. You’ve got, obviously, Fox. Former Director Comey. The Comey letter, Scott Walker, voter suppression. Put yourself in the position of a low-information voter. Your Twitter account is saying, “Oh, my gosh, Hillary Clinton is running a child trafficking operation!” Some people stayed home and some people went third party — and, at some point, it sort of bleeds over into misogyny.

RUSH: And now Democrats are asking her to shut up. You know, if you’re gonna talk this way, do it at home where nobody can hear you, because she’s presenting them with problems. Because there isn’t a Democrat in the world that wants to sign on to this. Well, I take that back. There’s gotta be a Democrat somewhere that will, but the vast majority of them want to get away. They just want her gone. They want her off the stage; they want her to stop talking. Because they don’t want to be asked if they endorse what Hillary is saying.

The mighty Clintons. The mighty Clintons. Bill Clinton? You can’t find him. Where is Bill Clinton? With the Energizer Bunny up in Chappaqua? Where is Bill Clinton? He’s nowhere. The bloom is off of the rose, and there’s even a story in TheHill.com: “Democrats Angry Over Hillary Clinton’s Latest Comments.” Because they know this is really bad for them. And the Republicans thus need to keep talking about it, and they still need to ask. Whether Democrats don’t want to talk about it or not, they need to be asked: “Do you support Hillary? Do you agree with what she’s saying about why the Democrats are losing elections?”

Now they’re trying to smear Trump’s chosen selection to be the CIA director on the basis that she was a torturer.