RUSH: This is yesterday, Washington National Press Club. Jeff Flake, this is the guy, senator from Arizona, couldn’t even get renominated, lose his primary if he had to and is now thinking about running for president on the Republican side.

FLAKE: If my party is going to try to pass off the degradation of the United States and her values from the White House as normal, if we’re going to cloister ourselves in the alternative truth of an erratic leader, if we are going to refuse to live in a world that everyone else lives in and reckon with the daily reality that they face, including their very real and understandable anxiety that they feel, then my party might not deserve to lead. 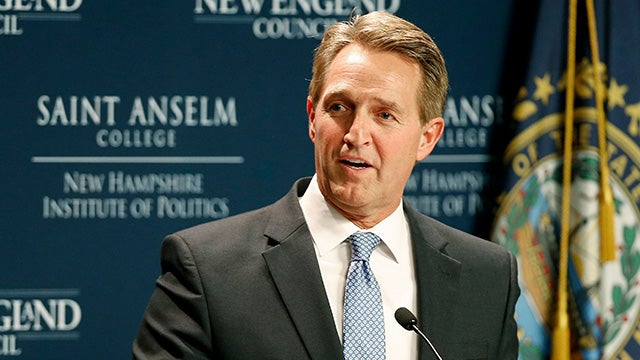 Now, on what basis does his party not deserve to lead? Well, “if this party is gonna try to pass off the degradation of the United States and her values as normal,” that is a criticism of Trump and I guess his behavior, Trump and the way he speaks. “If we’re going to cloister ourselves in the alternative truth of an erratic leader.” Again Trump. “If we are going to refuse to live in the world that everyone else lives in” — what world is that, that everyone else lives in?

If we don’t learn to reckon with the daily reality that they face, including their very real and understandable anxiety. Their real and understandable anxiety. So Senator Flake thinks the vagina hat crowd and the Hollywood left and all of these other Fruit Loops are legitimate, that their anxieties are legitimate and real and we had better say we get it and we had better join them if we want to win. Because if we don’t, we are never going to deserve to lead.

It sounds to me like what Flake is saying here is unless we disband the Republican Party, we don’t deserve to lead. Unless we simply abolish this silly conservative opposition to what is the mainstream, which is the resistance thing, we don’t deserve to lead. Any wonder this guy couldn’t win his reelection primary, and now thinks he’s gonna be elected president on the Republican side? 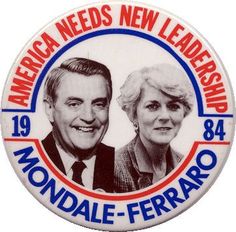 Remember Walter M. Mondull back in 1984 running against Ronaldus Magnus? Mondull, you know what his number one campaign promise was? “I am gonna raise your taxes. So is Reagan. The difference is he’s not gonna tell you and I just did.” And Mondull went down to a 49-state landslide defeat.

What is it about people on our team that think the key to victory is admitting that the resistance is right? “Yep. You know what? We really are a bunch of mean-spirited SOBs in this party. And I’ll be the first to tell you you’re right, and we gotta get rid of ’em, and I’m gonna lead the way in getting rid of ’em. In fact, we’re gonna get rid of as many of ’em as possible, and I am the guy to revive the Republican Party.”

Senator Flake, you think they’re going to welcome you with open arms? They’re still gonna be resisting you if you persist in opposing them in anything at any time. The ignorance, the inability to see history and not repeat it, is mind-boggling to me.

St. Anselm College. It’s in Manchester, New Hampshire. This was this morning, and he’s got a slogan I guess. Here it is.

FLAKE: I stand before you today, the rarest of species: the American conservative, Americanus Never Trumpus.

RUSH: The American conservative, Americanus Never Trumpus. Let me remind you again what the objective of the Never Trumpist is. It is not to advance conservatism. Jeff Flake doesn’t know what it is anyway. Never Trumpers are not trying to save conservatism, whatever they tell you, however they position themselves, that’s not what they are trying to do.

They want you to believe that they think Trump is so bad that his very presence is giving conservatism a horrible reputation and a horrible image, and they are there as Never Trumpists to save conservatism from this horrible image. That’s not what they’re doing. They are trying to make sure that this stain, as they call it, does not attach to them. It’s not about conservatism advancing it, saving it. It’s about saving themselves.

These people can’t stand the fact that their life’s work, in terms of issues they believe in, are actually being implemented by a guy they hate. And so they are abandoning their issues! They’re abandoning conservatism because they don’t like the image or the reputation of Trump attaching to them. It’s selfishness. And that’s what Flake is, being selfish, plus he’s got severe sour grapes. Americanus Never Trumpus. Boy, that was a laugh riot. Oh, is this guy clever. OH, man, how many votes did he pick up with that?