RUSH: There’s also something funny. Monday night. Last night Senator Crazy Bernie Sanders, Elizabeth “Fauxcahontas” Warren, and Michael Moore hosted a town hall on inequality in America. And, by the way, at this town hall, Michael Moore began to excoriate the media. He ripped the media left and right for focusing on nothing but Russia. He said it’s time to drop Russia. This Trump guy is doing so many bad things and the media is not even covering it. He dumped all over the media.

Ben Shapiro at his website The Daily Wire said it makes sense since Crazy Bernie, Michael Moore, and Elizabeth “Fauxcahontas” Warren should know an awful lot of about inequality. Bernie Sanders owns three homes. Michael Moore owned nine homes as of 2014 and was worth $50 million at the time. Fauxcahontas lives in a $2.4 million home and is worth between $3.7 million and $10 million herself. 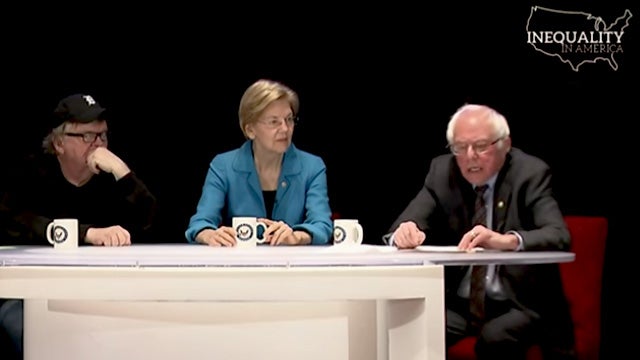 “All three of them are intent on rectifying the financial imbalances in America by taxing people who make less than they do to pay people who make even less than that, presumably. All in all, 1.7 million people engaged with the live townhall, at which the participants whined about the terrible fate of people living in the freest, most prosperous country in world history.”

Did you see where the ChiComs have announced some new measures that mean citizens with bad social credit will be restricted from traveling? You do things that can earn you a place on the blacklist, and that could bar you from being allowed to travel on trains and airplanes. For example, if you smoke in public, if you use expired tickets — and there are a lot of other little, tiny violations — it’s like, if you are caught spreading false information about terrorism, you can be prevented from using trains and airplanes.

Two statements by the ChiCom government Friday confirmed that rule breakers can expect to face travel bans of up to a year. They’re calling this bad social credit. The concept of social credit is part of a wider overhaul planned to be rolled out by 2020. Everything from how well you treat your parents to what you’re buying will affect your eligibility to receive various rewards and benefits and to be punished. Now, this is something the American left would love to be able to incorporate here. And the guy instituting it is Xi Jinping, who was just made president for life in China.