Why Are Millennial Women Attracted to Socialism?

RUSH: I saw something last night. I’m doing show prep… I think… I don’t have it in front of me. I didn’t bother printing it out because of where I saw it. But it was the Pew Research Center, and it was a survey or some kind of report about a study of Millennials and how Millennials more than any other group tend to be interested in and fascinated by socialism. But then when you got down to it — when you got deep down digging into the data — it was predominantly Millennial women driving the numbers. 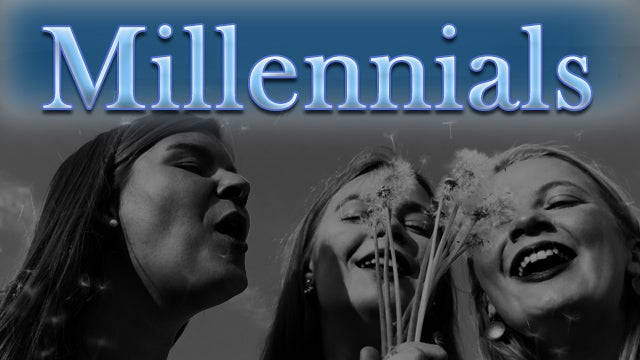 So I asked myself, “Why would Millennial women find communism/socialism cool? What is it that’s attracting them to it?” And I’m… Look, I understand that they don’t know what it is. They probably haven’t been told what it is, particularly socialism. They probably have some romantic notion of what it is. But even at that, why is it that Millennial women are apparently more susceptible to the come ons of socialism/ communism than any other group of people?

RUSH: Oh goody! I have somebody who wants to answer the question. I mentioned this a short a while ago. I was reading some data from the latest Pew Research Center for the People and the Press and they found out that Millennials are very, very much attracted to socialism, even communism. And when you dug deep in the data you find out that the reason Millennials are interested in it is because it’s primarily Millennial women. So we’re talking age-group 18 to 34. So I threw the question out there: “Why? Why is it about socialism/communism that is appealing to Millennial aged women?” We’ve got Carolyn in Phoenix who wants to try to answer it. Great to have you. I’m glad you called.

CALLER: Great. Nice to talk to you, too, Rush. I’m a 50-something female that grew up going to college in the eighties. By then feminism wasn’t like a man-hating feminism. We just wanted to do the best that we could. The world was our oyster and we wanted to have good careers.

RUSH: Hey, wait a second. Do you think that…? The feminism today you said is man-hating, but it is anti-male? You think it still is?

CALLER: I’m thinking more of the sixties and seventies was more man-hating.

RUSH: Was more…? I think they’ve revived it. I think it’s alive and kicking today too. But, anyway, don’t want to distract you or sidetrack.

CALLER: Okay. (chuckles) Anyway, I think that the Millennial women today have been given so much by their parents, they don’t have the work ethic. They just don’t… I mean, they haven’t seen a society where the economy’s been really good, and I think that’s why they’re more susceptible because they think things aren’t fair.

CALLER: And that, you know, people need to share and the system’s stacked against them, to quote Elizabeth Warren.

RUSH: What about…? Now, these are primarily… I should have added, too, that these are college-educated Millennial women who pretty much think this.

RUSH: So you have to factor in what they’ve been taught about it as well.

CALLER: Right. Exactly. From the universities that brainwash their students.

RUSH: Well, but, you know, then there’s something else, since I have you to ask you about it. It’s not… Even though this survey is about Millennial women, you can go back to the Clinton era nineties and find the soccer mom phenomenon. And the soccer mom phenom…? These are married — largely, back then, as a demographic — white women who had children. And the reason they were called soccer moms is that was the name they got because they did it all!

Their husbands were not helpful. They went off to work and then whatever they did and after work, they didn’t come home. It was up to mom to get the kids up, to get ’em off to school, feed ’em breakfast and then to pick ’em up after school, soccer practice, whatever else. Bring ’em home and feed ’em dinner and just… The soccer mom was doing everything. And they, almost as a bloc, voted Democrat.

One of the reasons it was said back then was Bill Clinton is the kind of guy that every woman wishes were her husband, and Bill Clinton’s the kind of guy that makes every woman think that he loves her and appreciates her and is gonna take care of her. And really what it boiled down to was that soccer moms really, really loved the idea — like you say — of government distributing things and making ’em fair and looking out for people being mistreated like soccer moms are being mistreated by their husbands and ignored.

RUSH: You think the same thing may be applied to Millennial women today?

RUSH: So then the question would be: Why are women attracted to socialism and communism, not just Millennial women?

CALLER: I don’t think all women are. But —

RUSH: Well, obviously not, but —

CALLER: Yeah. I think it comes from that taking-care-of-people attitude and that they feel that people aren’t being taken care of.

RUSH: But, see, the reason I’m confused is because modern era feminism — which I trace to the late sixties, the modern era —

RUSH: — is all about not depending on anybody else, not depending on a relationship. It’s about doing it yourself. Even if you have to become like a guy to join the club, to join the CEO circus, to get through the glass ceiling, you could do it! You can do it all, but you had to do it yourself. You shouldn’t derive much pleasure from your relationship. It will only disappoint you. You shouldn’t make a man a center of your life. What happened to that? What happened to that sentiment?

RUSH: Well, it’s interesting. I have this story here about Hillary Clinton. Where is this? This is The Federalist. It’s a piece by Sabrina Schaeffer. Carolyn, I’m glad you called. I appreciate that you took a stab at this.

Sabrina Schaeffer writing at The Federalist. Headline: “Hillary Clinton’s Woman-Bashing Is Why Women Find Feminism So Distasteful.” How many think that what Hillary is doing is woman bashing? You would? You think what Hillary is doing is woman bashing? Well, I guess so. When she bashes women for not having their own minds and doing what their husbands say, what their bosses say, and their uncles and so forth. These women are not allowed to be themselves ’cause their men will beat ’em up or not be nice to ’em or what have you. So you would constitute that to be woman bashing? 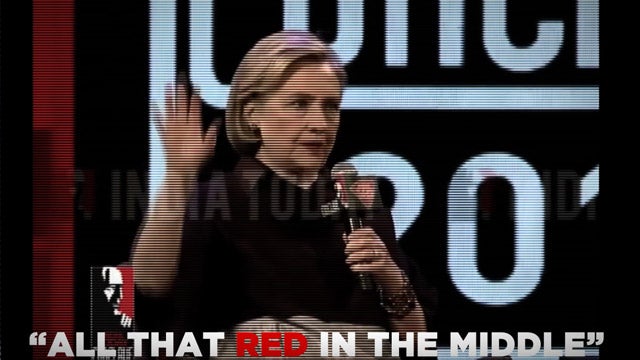 Pull quote: “But Clinton’s comments weren’t simply problematic because they cast men, once again, in a negative light. What was even more egregious but seemed to escape notice by some is that she also stripped women of any free will, a posture the modern feminist movement has increasingly adopted.”

And it’s true. The modern incarnation of feminism is nothing like the early days of the modern era. “Hillary Clinton’s comments suggest so much that is wrong with today’s feminist movement: it’s both anti-male and anti-woman at the same time. Why are so many women reluctant to call themselves feminists? It might be that widespread hostility toward men defines modern feminist movement.”

See, I don’t think there’s any question about it. I think hostility toward men — you can see it in the snowflake babes on college campus. They see rape when there isn’t anything. When they see the time art of seduction being called abuse. When men in their very natural existence are predators and so forth.

And Sabrina Schaeffer says here, “Certainly that was the theme of Hillary Clinton’s remarks earlier this month, when she blamed her 2016 presidential loss on husbands pressuring white women to vote for Donald Trump. Clinton has since been widely criticized and apologized. But her comments suggest so much that is wrong with today’s feminist movement: it’s both anti-male and anti-woman at the same time.”

I don’t know these people that Hillary’s talking about. I honestly do not know a couple where the husband tells the woman how to vote. I do not know that couple. I don’t know anybody. If anything, it’s the opposite. It’s not that the women are telling the husbands how to vote. It’s the women telling the men, “Don’t tell me what to do, lug head.” But I don’t know these couples that Hillary seems to believe are commonly dispersed all across the middle of the country. And I don’t think they exist. 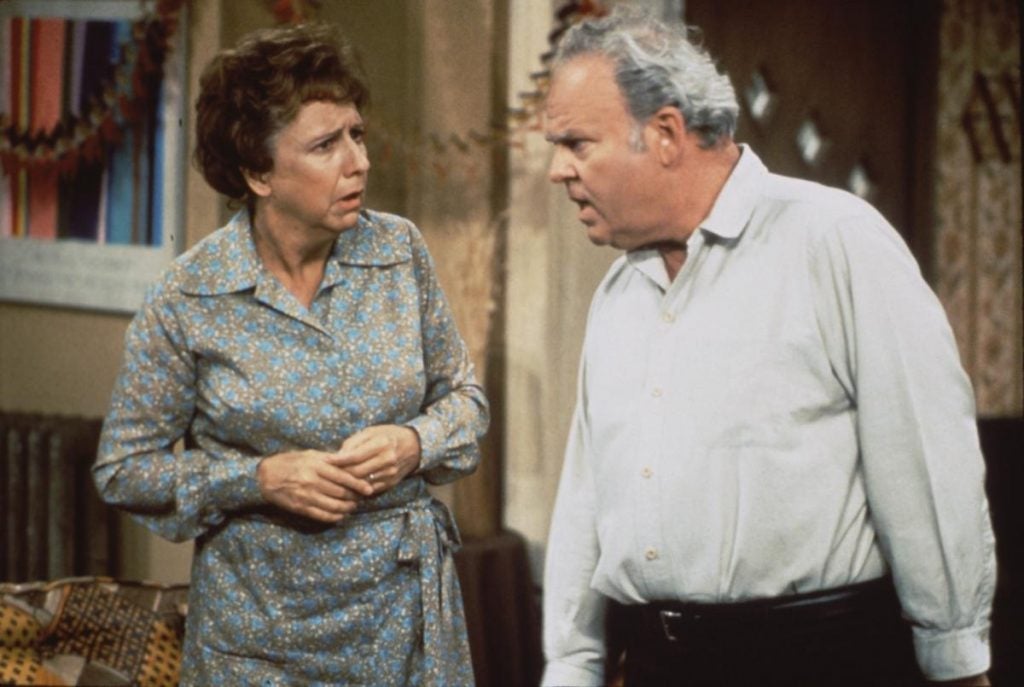 I think what we’re hearing is Hillary’s historical anger and rage. She thinks everybody’s Archie Bunker. She thinks every man is Archie Bunker telling Edith not only who to vote for and how to vote, but when to clean the house and how to do it and when to do the dishes and then to shut up. That’s what Hillary thinks is still the normal American male-female relationship. And she says everybody in the red states wants to look back to a time-honored past? It’s Hillary that can’t get out of the past. That’s her big problem.

For all this talk that Hillary Clinton is the smartest woman in the with only, she hasn’t reached the twenty-first century yet. Hillary Clinton is still living the rage of her youth, and she’s still living the anger at Wellesley and Yale when she was being advised to be an angry, loud, boisterous woman tackling discrimination everywhere. She’s the one that can’t grow up. Coupled with that, she has this sense of entitlement which, as I say, in a way you can’t blame her.

She saved her husband’s career, and in the process saved the Democrat Party, by staying with the guy and by running the bimbo eruptions, even though she botched the whole thing. She allowed the Democrat Party to continue to win elections for her husband’s career to triumph, for the Clinton Global Initiative and Clinton Foundation to not only be founded, but to raise all this money.

And all she had to do was bite the bullet and be cheated on all the time and not care. And, as such, she became the most cheated-on woman in America. So, in one sense you can understand her rage. And in another sense you can understand how she hasn’t grown out of it, because her experiences — I don’t think Bill has ever told her how to vote. I mean, Hillary’s the one with the testicle lockbox. If anybody’s telling anybody what to do —