CNN Has Grand Old Time Thinking Trump Stuck It to Us

RUSH: And CNN’s having a grand old time ’cause, “Yeah, the president got all of his base’s hopes up on a veto — Rush Limbaugh, Bob Corker — and now the president’s slamming ’em by signing the bill!” My hopes were not up. I didn’t think he was gonna veto it. I think he should. I think he could do a national address to this country and explain why he’s vetoing it. And I have… Well, I have a bad feeling about it, but we’ll just see what happens. But let’s look out for something, okay?

Let’s gauge the immediate aftermath of this. Now, there’s gonna be a congressional recess; it’s already started. It’s a two-week recess. So they’ll be coming back after Easter which is April the 1st this year, and let’s see how much newfound affection and love for Trump there is among the Democrats and on Capitol Hill after signing the budget. Let’s see if this brings the Never Trumpers around. Let’s see (if, in fact, he signs it) if it changes his fortunes in terms of the press coverage. Let’s see if it makes Stormy Daniels go away.

And let’s see if it makes Karen McDougal go away. And let’s see if Mueller says, “You know what? (laughing) You know what? I — I — I… It’s about time to tell you, folks: We got nothing here on our investigation of collusion. So we’re gonna be wrapping this up. We’re gonna send a report up to Capitol Hill here and then they can do with this what they want.” Let’s see if all of that happens. (interruption) What are my bets? What do you think that’s gonna happen if Trump’s…? (interruption) 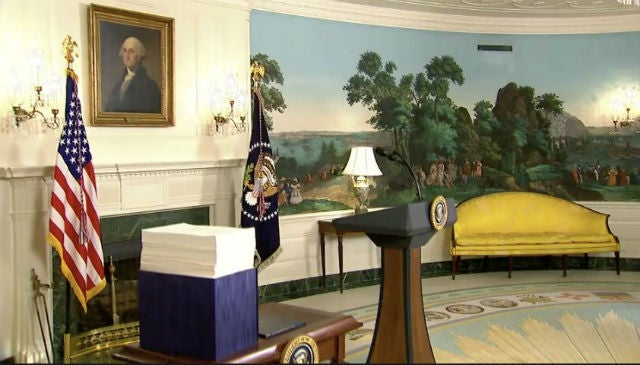 RUSH: Here is CNN about 25 minutes ago talking about what is gonna happen now at this 1 o’clock — now 1-whatever-it-is — ceremony.

REPORTER: The Diplomatic Reception Room is being setup right now for a presidential signing, not a veto. John? 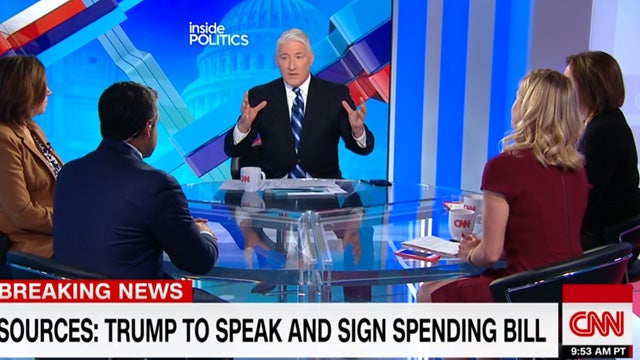 RUSH: So these…? What is it? These people are reveling in the fact that Trump is putting the screws to us? Is that what this is? Trump’s putting the screws to himself if he does this, given everything that’s known about this now. And, Mr. King, it’s not just the spending in this thing. That’s the least of this, and that is dramatically bad as it is. But the spending is the least of this! They weren’t through. John King continuing with this on CNN…

JOHN KING: Assuming the sources are correct that he’s gonna sign this bill and he doesn’t pull out the rug underneath from (sic) everybody, yet again… Underscoring both the chaos, the dysfunction, and the weakness of his presidency! He signed off on this deal two days ago! His people went out, told the leaders of Congress, told people who didn’t want to vote for it, “Please vote for it. The president wants it.” The president spoke publicly for it.

He wakes up this morning and threatens to veto it.

Now he’s gonna walk into a room and sign it after conservatives — Rush Limbaugh on the radio, all over Twitter, conservatives — saying, “Please, Mr. President. This is a bigger spending bill than Barack Obama could have ever dreamed of. This is a Democratic bill, not a conservative bill. Veto it.” He built up their hopes, and now he’s essentially gonna sign a bill. He’s going to prove, “I’m Donald Trump. My brand is strength. I cannot get what I want — not even little bits of what I want — from a Congress controlled by my party!” So it’s chaos, it’s dysfunction, and it’s presidential weakness!