Did Trump Pull a Fast One on the Spending Bill?

RUSH: I want to share with you a piece I found here in the failing U.S. News & World Report. I didn’t even know that U.S. News was still around. I don’t think it is as a magazine. But it’s there, because I found something on a website claiming to be U.S. News. And the headline is: Building a Wall in the Dark.” The subhead: “Congress is using budget shenanigans to funnel Pentagon money to President Trump’s border wall.” And the writer here is Ryan Alexander, opinion contributor. 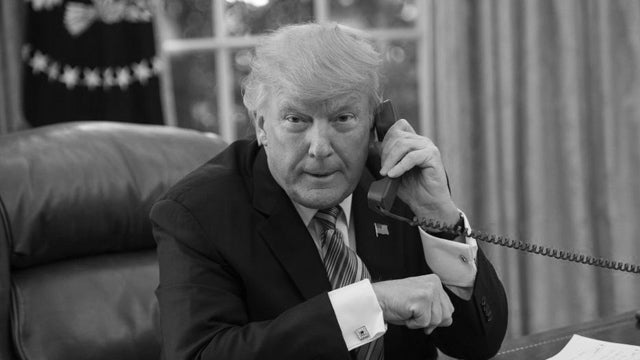 Now, this is dated back in July of 2017. It’s not about this deal last Friday. July of 2017. But I came across this, and it sounds eerily similar. Don’t know if there’s anything to this, but I just want to share.

“FAIR WARNING: This week’s column is a deep dive into the inner workings of the House of Representatives. When you kick that rock over, goodness knows what will skitter out. In this case, it reveals some unsavory shenanigans to funnel money to President Donald Trump’s proposed border wall.

“If you’re for the wall, you’re thinking, ‘Good! We should be spending taxpayer dollars to keep illegal immigrants out of the country.’ But, if I told you the money was going to come from the Pentagon budget, would that still make sense to you? Federal military troops are forbidden to engage in law enforcement actions, such as enforcing immigration law … The federal agencies charged with protecting U.S. borders and enforcing immigration laws, like the Coast Guard and the Border Patrol, are in the Department of Homeland Security. And the president’s budget request for fiscal year 2018 includes just over $44 billion for the department.”

Now, remember, this story is about nine months old. So bear with me.

“So, again, I ask, why should the Pentagon be asked to pay for a border wall? It seems to be a testament to the famous reason Willie Sutton gave for robbing banks: ‘Because that’s where the money is.'” The Pentagon is. It’s even more true this year. This omnibus that Trump signed sends $650 billion to the Pentagon. The upshot of this piece is that Trump can allocate that money however he wants. Wait. No. He can direct it, he can spend it. Congress allocates, but Trump, once the money is at the Pentagon it’s in the executive branch, and Trump can do with it what he wants.

“So, again, I ask, why should the Pentagon be asked to pay for a border wall?” That’s where the money is. “The Pentagon, with a total proposed budget of $639 billion ($574 in base budget and $65 billion in special ‘war’ accounts), is where lawmakers can find the money for just about anything.”

“But the House Armed Services Committee version of the annual Pentagon policy bill included a common-sense provision to make sure the Pentagon isn’t tasked with paying for the wall,” just like this omnibus has all kinds of restrictions in it. You know that this omnibus says that concrete cannot be used in the fencing that Trump is permitted to build. And Trump’s out there saying (imitating Trump), “Hey, we’re starting today, we’re starting today on the wall. We got our initial down payment, $1.6 billion, we’re starting on it today.”

He’s telling people that over the weekend. He tweeted it out, he told people at Mar-a-Lagos as he’s running around saying hi to guests. He’s characterizing the $1.6 billion in this omnibus as a down payment.

“But the House Armed Services Committee version of the annual Pentagon policy bill included a common-sense provision to make sure the Pentagon isn’t tasked with paying for the wall: ‘Section 1039. Rule of construction regarding use of Department of Defense funding of a border wall. None of the funds authorized to be appropriated by this act or otherwise made available for the fiscal year 2018 for the Department of Defense may be used to plan, develop or construct any barriers, including walls or fences, along the international border of the United States.'”

And that same kind of language is in this year’s omnibus. 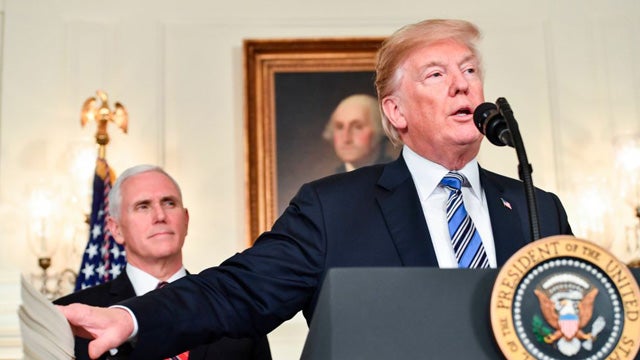 “A careful reading of this language … points out this is a fairly broad prohibition. The armed services committees don’t ultimately control how federal dollars are spent. The Constitution preserves that role for the appropriations committees. But by saying ‘or otherwise made available … for the Department of Defense,’ the House Armed Services Committee was foreclosing the possibility of spending any Pentagon money on this wall,” but, but, but…

And this guy is all ticked off about it, and this is from last summer. He’s all ticked off about it. The upshot of this is — and if you look in enough places, you will find a number of people theorizing that that’s exactly what’s going to happen. That one of the reasons there’s so much money in the defense budget is that a lot of it is going to be used for things Trump could not get out of Congress to do. But ultimately Congress had to give the go-ahead with the various shenanigans, if you want to look at it that way, creating this rule.

The guy writing this at U.S. News is a member of something at Taxpayers for Common Sense, and they study this kind of stuff to find out how the American people are being screwed, cheated, misled, what have you. So it’s something to think about. A lot of people I have found — and I don’t know what kind of credibility this has. I really don’t. I’m still trackin’ it all down. A lot of it can be refuted with simple notations of other things happening in the news. But there’s a body of thinking out there that Trump is the one that’s pulled a fast one here. 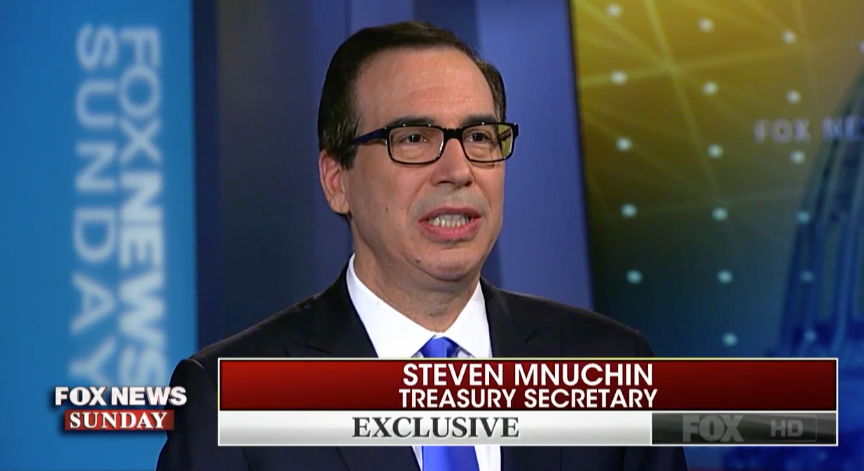 That Trump has found a way to get what he wants in defiance of Congress with the assistance of some members of Congress on the Rules Committee, and that one of the reasons the defense budget is so big is because a lot of it can be used for such things as the wall. Again, it’s nebulous. “If that’s true,” I ask myself, “then why is Mnuchin on TV demanding a line-item veto and why are so many excuses being made for Trump? ‘Well, you know, he had to do this. It’s a situation, Rush, where if you veto it, then what do I do?’

“I mean, you veto? So what? You got a government shutdown. Then what? What’s next? What’s the next step to solving this? So Trump had to do it.'” So a lot of people are trying to find hidden icing on the cake in this that makes it look like Trump has actually outsmarted people and has found a way to get money for things that he wants that was not specifically allocated or appro… Well, we weren’t any appropriations. This is an omnibus.

It’s not a budget, and some people think that because of that Trump has much more latitude on how this money is actually spent and where it actually goes. But then you go to the reading, you go to the wording in this actual omnibus, and it prohibits concrete. It prohibits anything on this fencing area for 33 miles that looks anything like any of the prototypes. So we’ll see how it plays out. There’s also this thinking about the need for the massive amount of money for defense.

There are two things percolating out there that pose a serious threat — one’s Iran going nuclear, the other is North Korea — and that Trump is serious about tackling them both and can’t do it credibly and with the strength he needs without this massive amount of money that the world now knows is going to be spent on defense. Just that realization alone is thought to be a huge deterrent to both the Iranians and North Koreans and ISIS and anybody else in general. So the situation remains fluid.

RUSH: Let me read to you a Trump tweet from this morning, given the data that I just shared with you. Trump tweeted, “Fund through military…” He tweeted this. “Because of the $700 & $716 Billion Dollars gotten to rebuild our Military, many jobs are created and our Military is again rich. Building a great Border Wall, with drugs (poison) and enemy combatants pouring into our Country, is all about National Defense. Build WALL through M!”

Everybody thinks that means “military.” Now, the key here is “jobs are created and our Military is again rich. Building a great Border Wall, with drugs (poison) and enemy combatants pouring into our Country, is all about National Defense.” If Trump wants to declare a human rights emergency or a national defense threat or some such thing, the military and its budget would then be allowed — or would be accessible — for use. 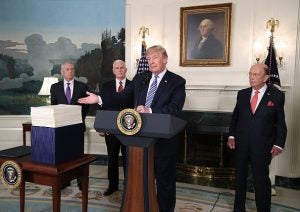 So if Trump issues a proclamation which declares the southern border to be a national security threat and a human rights violation area, what have you, there are people saying, “Then legally Trump could go get some of that $700 billion from defense and use that to build a wall, and there’s not a thing anybody could say about it.” The people who are saying this are very worried. This is not… I’m not reading this from people who are Trump supporters who think that he’s outsmarted everybody.

These are people worried that Trump is in the process of outsmarting people and is going to find a way — using existing regulations and law — to allocate some of that massive amount of $700 billion for defense to his border wall and whatever else that he wants and that they are theorizing… These are people that don’t like Trump. They’re theorizing this is one of the reasons why Trump didn’t seem to fight this very much, is because he had knowledge that he would be able to use or get access to some of the money in this omnibus, even though Congress had not specifically appropriated it.

One of the gray areas here is the difference between an omnibus and a budget.

An omnibus is just Congress allocating (chuckles), you know, a hell of a lot of money. A budget is actually 12 appropriations bills that’s combined into one, with every appropriation containing specific directions over where the money is to go. ‘Cause there’s not a dollar spent in this country that is not first authorized by the House of Representatives. Well, the key here is “authorize” versus “direct,” “allocate” versus “be in control of.” So there’s a lot of Never Trumpers… There are a lot of people that don’t like Trump very worried about how things might actually shake out. We’ll just have to wait and see.